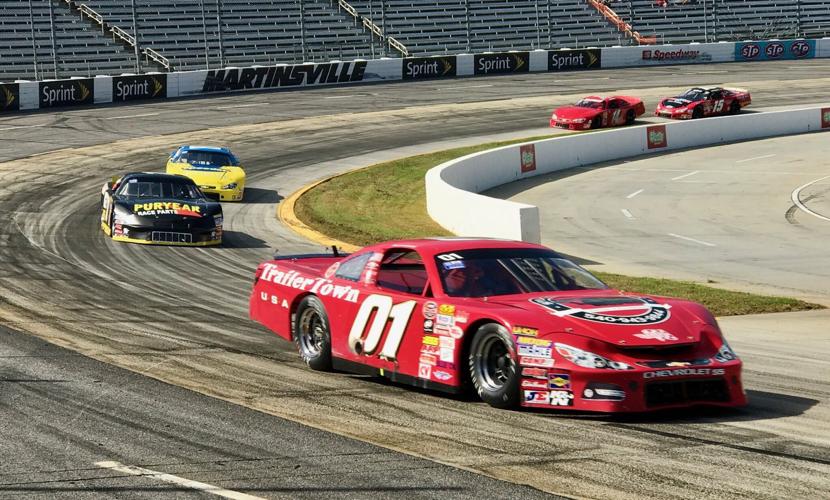 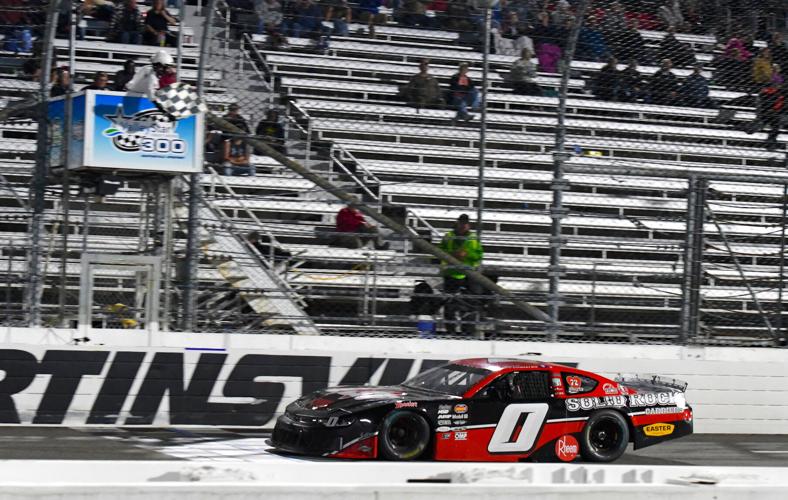 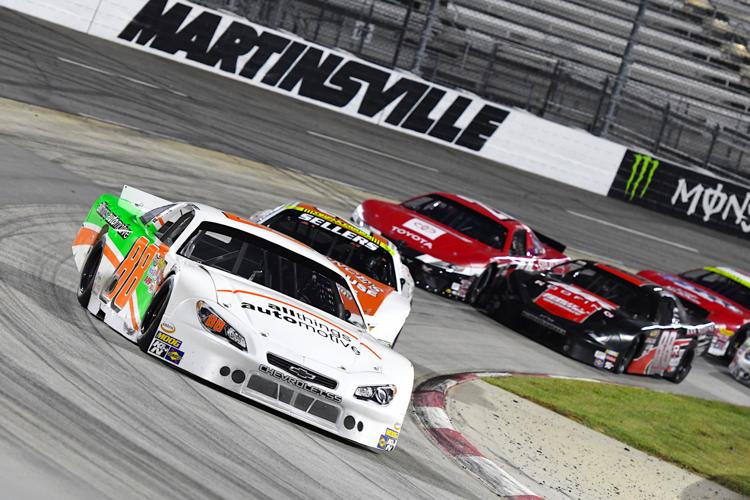 Josh Berry (88) leads the field during the 2019 ValleyStar Credit Union 300 at Martinsville Speedway, a race he won after leading every lap. 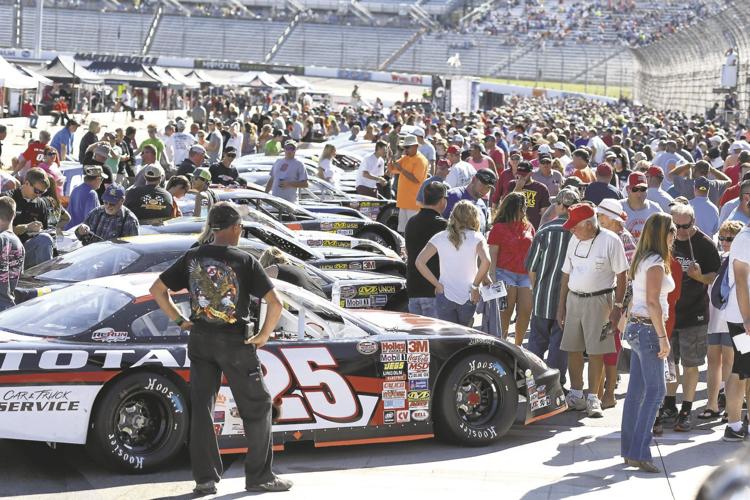 In this 2016 photo, fans attend an autograph session prior to the ValleyStar Credit Union 300 at Martinsville Speedway. 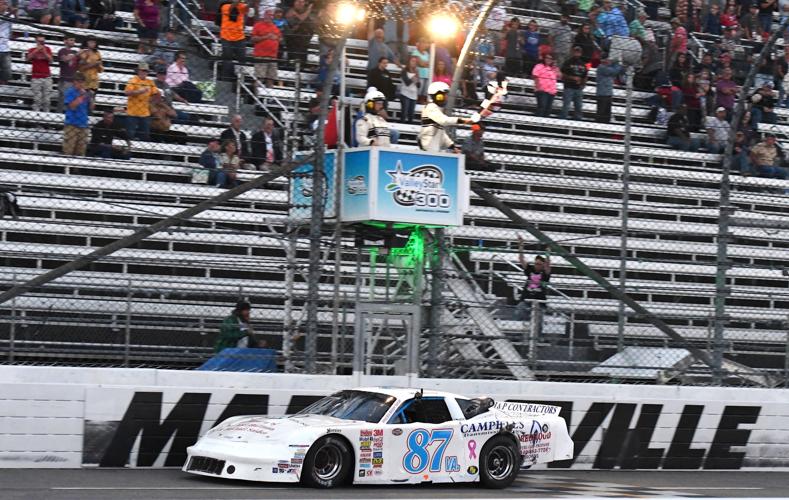 In this 2017 photo, Mike Looney crosses the finish line to win the ValleyStar Credit Union 300 at Martinsville Speedway.

For as long as Clay Campbell can remember, Late Model Stock Cars have been racing at Martinsville Speedway.

The track used to run late models as part of double and tripleheader weekends with the NASCAR Cup Series. One of those late model races was won by future NASCAR Hall of Famer Mark Martin.

As for when the track moved late models to their own separate race weekend, Campbell, now President of Martinsville Speedway, can’t remember when that happened, but believes it was sometime in the early-to-mid 1980s.

When he looks back at those early late model races, things couldn’t be more different than what fans will see at Martinsville for this Saturday’s ValleyStar Credit Union 300.

“I mean it’s incredible looking at the cars back in the day versus what they are now,” Campbell said in a recent phone interview.

“If you go through the field, the entire field of 82 this weekend, you won’t find any cars these days that you say, well they don’t even belong here. I remember the days when probably half of them you knew probably didn’t belong. But those days are over. The late model stock division has come so far from when they first started running here.”

The idea for the track’s late model race came from Campbell’s grandfather, H. Clay Earles, the founder of Martinsville Speedway who was involved with the track until his death in 1999.

Several decades ago, late model drivers had a hard time going from track-to-track to race because each short track had its own rules. If you raced at South Boston Speedway your car likely wasn’t legal at Hickory Speedway, and so on. Earles wanted to unify the rules so drivers could race wherever they wanted, while also offering drivers from any track in any state a feature race to face off once per year.

Martinsville Speedway now boasts that the annual race is “the nation’s biggest, richest and most prestigious NASCAR Late Model Stock Car race” in the country. That moniker, he said, was largely made possible once the partnership with ValleyStar Credit Union was formed.

It was also, he said, the drivers who turned the race into the premiere event it is today.

“Thanks to the competitors, they kind of guided us on that one,” Campbell said. “As time went on, especially the tripleheader was big for late models, but whatever year it was that we went to a single late model race, that kind of kicked it in high gear, and it kind of grew each year.”

“Looking at the names, you’ve got a lot that have never won it, but in the late model stock world they were household names,” Campbell said. “That’s where the race is difficult because in other series you’ve got maybe 40 cars. Here you’ve got 80 each year.”

Campbell also boasts about how important the race can often be for young drivers as they move their way up the NASCAR ranks. Cup Series winners William Byron and Bubba Wallace both made appearances when they were teenagers. NASCAR Xfinity Series driver Josh Berry won the race in 2019, the year before he was offered an Xfinity ride with JR Motorsports.

And the youth movement isn’t going anywhere. The race was won last year by 16-year-old Landon Pembelton, who led the final 50 laps to take the checkered flag, the grandfather clock trophy, and the $32,000 prize.

“You look back probably 10, 20 years ago with this event… the competitors were older,” Campbell said. “You look at it now, it’s just like everything else, the youth movement has arrived.

“It’s amazing how kids go from go-karts to quarter midgets to whatever, and they wind up here. This is big. Going from whatever you ran prior to this is a big jump, but they’re certainly capable of it.”

Campbell pointed to Berry and the way he was able to turn his Martinsville win into an Xfinity Series ride – he won again at Martinsville in an April, 2021, Xfinity race. Pembelton, too, has used the exposure from the race to get into the Toyota Racing Development program for young drivers and race four times with Venturini Motorsports in the ARCA/Menards Series.

“It’s a heck of a notch to have in your belt being champion of this event,” Campbell said.

“We’re very fortunate that we’ve had such a run with these races and so many competitors and so many backgrounds at the start of future careers. It’s been phenomenal.”

As Martinsville Speedway celebrates its 75th year of racing, even though the track is most known nationwide as a NASCAR track, Campbell said the late model race every year is part of the fabric of the track, and big part of what the speedway is all about.

He knows, though, that while it might be seen as the biggest and best Late Model Stock Car race in the nation, with exponential growth over the decades, it can still grow even more.

“As big as it is now, I don’t think it is as big as it’s going to be,” Campbell said. “And that’s our goal. I want it to be the biggest NASCAR late model stock car race in the country, and we will do whatever it takes to maintain that.

“I think that says a lot. Luckily we’re a Cup track so that gives us somewhat of an advantage because guys like coming here and running on the same track as all the greats and the NASCAR history that has been here, so it makes a big difference. It’s kind of like hallowed ground when they get here, and that’s advantageous for us.”

It's About Time: Peyton Sellers gets first grandfather clock at Martinsville Speedway

Peyton Sellers has done just about all there is to do as a Late Model Stock Car driver. On Saturday, he finally got the win he had been racing for for so long, taking victory in the VSCU300 at Martinsville Speedway.

Every year, the ValleyStar Credit Union 300 is circled on Barry Nelson’s calendar, and Nelson Motorsports will be looking for a second win at Martinsville Speedway this Saturday.

The youth movement has arrived at Martinsville Speedway this weekend, and one of its leaders this weekend is 15-year-old Katie Hettinger.

Teenager Landon Pembelton looks back on his win at Martinsville Speedway last fall, and the doors that have opened up in his race career since then, as he returns to the track for this weekend's VSCU300.

Ty Majeski is one of the most accomplished super late model drivers in the country, and he’s also currently a title contender in the NASCAR Camping World Truck Series. This weekend he’ll race a Late Model for just the third time in his career.

Harrison Burton and the No. 21 car of Wood Brothers Racing are going to Texas Motor Speedway this weekend to honor a hero. A cancer hero – the…

Who can afford to buy the Phoenix Suns?

Josh Berry (88) leads the field during the 2019 ValleyStar Credit Union 300 at Martinsville Speedway, a race he won after leading every lap.

In this 2016 photo, fans attend an autograph session prior to the ValleyStar Credit Union 300 at Martinsville Speedway.

In this 2017 photo, Mike Looney crosses the finish line to win the ValleyStar Credit Union 300 at Martinsville Speedway.