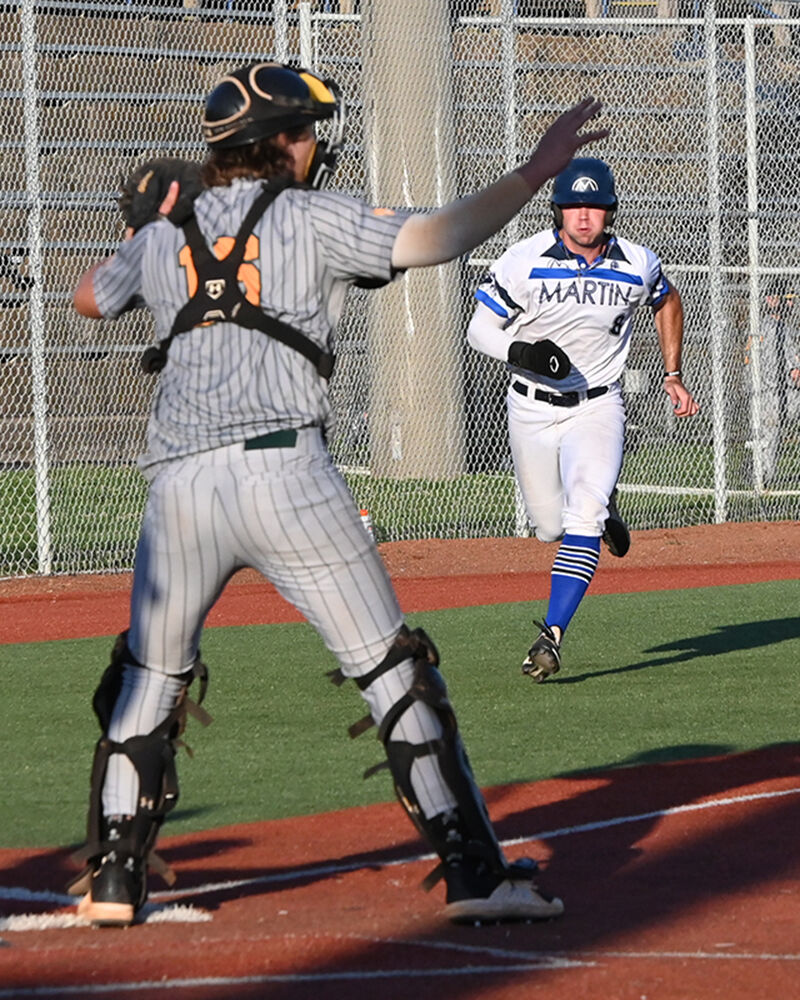 Martinsville Mustangs outfielder Will Knight leads the team in RBIs (21) and stolen bases (12) this season. 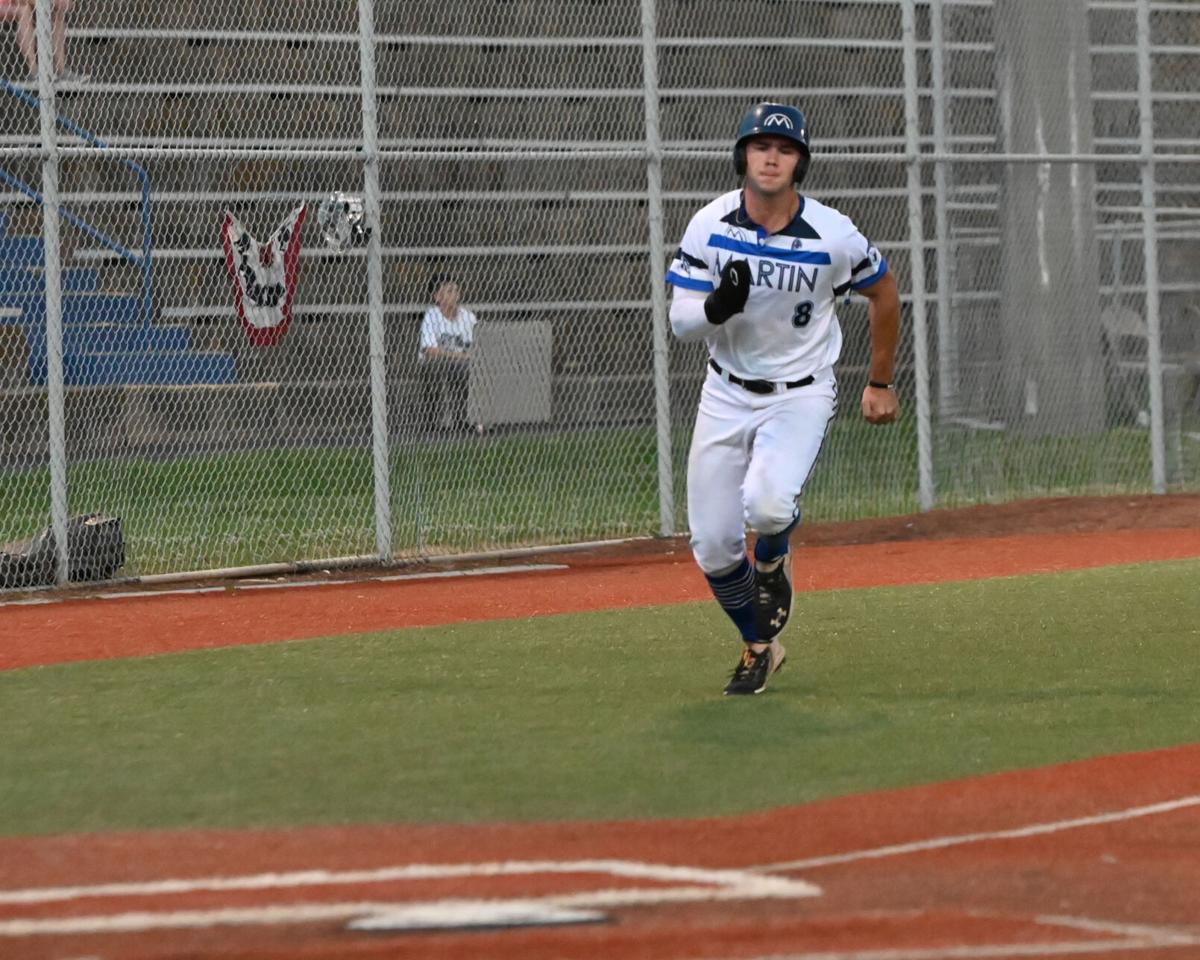 Martinsville Mustangs outfielder Will Knight runs home to score a run during a game this season.

By Jacob Tisdale Special to the Bulletin

Martinsville Mustangs outfielder Will Knight is feeling right at home in Martinsville, providing a steady bat at the leadoff spot while demonstrating leadership and poise in the clubhouse.

The Amherst, Virginia native is comfortable not only with his role on the team but with the city of Martinsville.

“Since I’m from a small town in Amherst County, this feels very similar to me,” Knight said about his experience in Martinsville. “I wanted to come to a small town that really loves baseball, and Martinsville brings a good atmosphere every night. It feels like I know everybody up in the stands after being here for two years.”

Knight is a 2-year starter at VMI, where he'll be a redshirt junior this season. The outfielder's background and sensibilities have made him the perfect fit with the Mustangs for the past two seasons, and he is having an excellent year offensively. Knight has a .296 batting average this season, contributing 32 hits while leading the team with 21 RBIs and 12 stolen bases.

“I was so happy he decided to come back and wanted to play in Martinsville again,” Mustangs coach Brandon Nania said of Knight. “As a manager, he’s one of those guys I can lean on to talk to and try to get what I’m saying back to the players. It’s been nothing but awesome to have him in the clubhouse and as our staple in the leadoff spot this year.”

Knight credits his success to his upbringing, and his love of baseball was cultivated from a young age.

“From the time I could walk I was holding and throwing baseballs,” Knight said. “I remember waiting every day for my dad to get off work asking him to hit me ground balls and throw with me and everything.”

Knight took what was instilled in him in his youth and turned it into an exceptional collegiate career at VMI. He worked through the adversities of walking on to earn a scholarship, a redshirted 2018, and a shortened COVID season in 2020.

Through it all, Knight has been a valuable contributor to the Keydets, even earning First Team All-State honors in the 2020 season. Across three seasons, he has a .290 career batting average with 131 hits to go alongside his stellar .975 fielding percentage.

Knight is exceptionally well-suited to overcome any struggles in baseball, as well as in life, according to his coach.

“His character is unbelievable,” Nania said. “The way he carries himself on the baseball field is fantastic. It’s how you wish every baseball player could be. He’s very even-keeled and that’s what I love to have in the clubhouse and on the field.”

Knight knows his role with the Mustangs and tries to help his teammates through thick and thin, using his own experiences to guide others.

“I try to be a leader always. Showing teammates how to respond whether it’s going good or bad,” Knight said. “Baseball is very up and down so I try to stay even-keeled no matter what.”

While his plans for the future remain open-ended right now, Knight still has two years of NCAA eligibility to look forward to before committing to anything yet.

“I’m majoring in economics and business at VMI so I'm pushing toward a project management job in the Lynchburg area,” Knight said.

However, his drive and passion for the game have him keeping his options open.

“Whether it’s in a minor league system or Independent League ball, I’d love to play baseball as long as I possibly can,” Knight said.

GETTING TO KNOW WILL KNIGHT

Knight: It’s a toss-up between The Sandlot and Field of Dreams. The Sandlot was my childhood.

Do you have any superstitions?

I have one before my at-bats. If I get a hit after putting pine tar on my bat, then I don’t put pine tar on it for the rest of the time, but if I don’t get a hit then my bat gets a new fresh coat.

"We Back" by Jason Aldean. That was my song during my sophomore COVID year and it was one of the best years I’ve ever had, so I kept it. It’s been working.

Do you play any other sports?

I played football and basketball growing up. Football is probably my best sport. Besides baseball of course.

The Martinsville Mustangs will play Coastal Plain League games at home on Friday and Saturday this weekend. Both games will begin at 7 p.m. Saturday's game will be followed by postgame fireworks at Hooker Field.

The current deal between ESPN and Comcast runs out in September, according to sources.

'The joy that he has for the game of baseball': Mustangs 'Journeyman' Matt Malone making baseball fun in Martinsville

PHCC men's soccer player Wilson Bowles announced on Wednesday his commitment to play at Lynchburg College in the fall.

This week in Mustangs baseball: Holt named CPL Pitcher Of The Week

A look at the Martinsville Mustangs, who are currently riding a 4-game winning streak.

Reggie Bush forfeited his Heisman Trophy in 2010. Now he wants it back.

A clear explanation of NFTs and their potential impact on sports

When Evan Mobley declared for the NBA draft in April, he didn't go the traditional route.

Martinsville Mustangs outfielder Will Knight leads the team in RBIs (21) and stolen bases (12) this season. 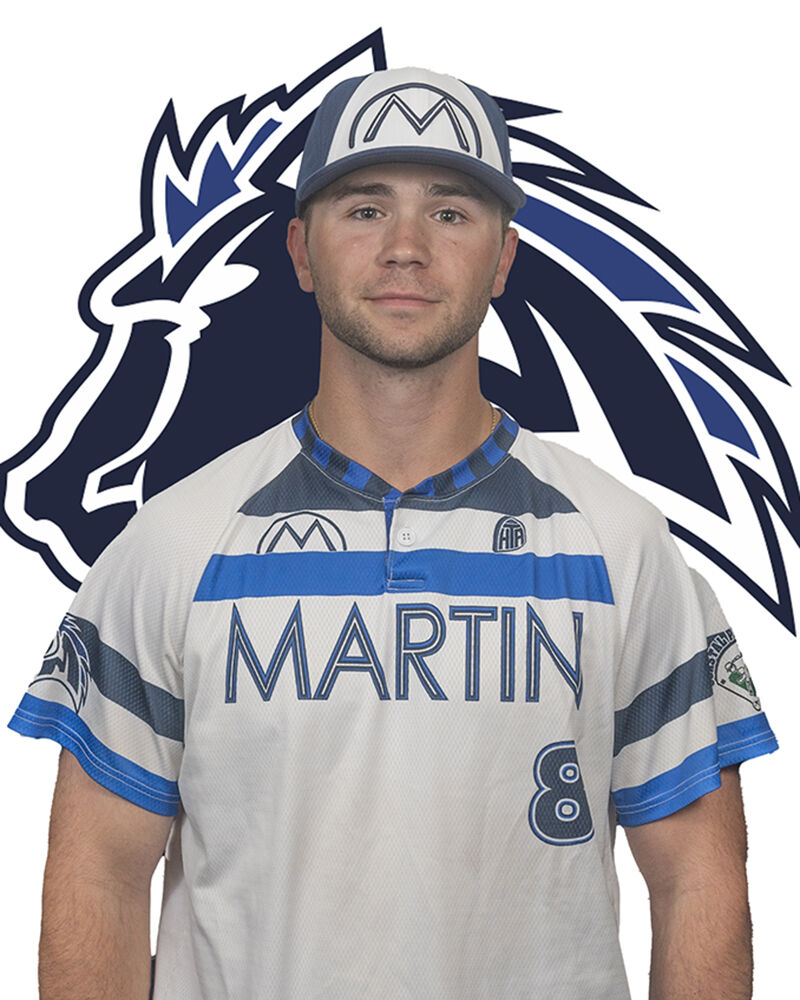 Martinsville Mustangs outfielder Will Knight runs home to score a run during a game this season.