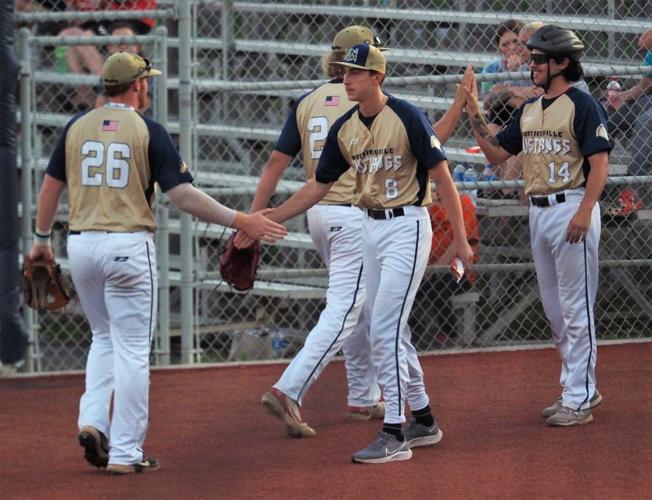 Martinsville Mustangs players shake hands after an inning during Friday’s doubleheader against the Tri-City Chili Peppers at Hooker Field. 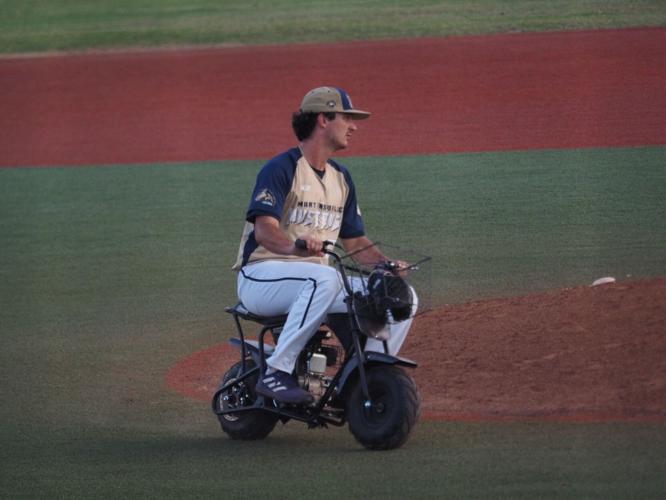 Mustangs reliever Reid Viar rides "Moe's Moped" onto the field before pitching the seventh inning of Game 1 of Friday's doubleheader. Mustangs relievers all ride the mini-bike on the field prior to their appearance, and then it's ridden back to the bullpen. 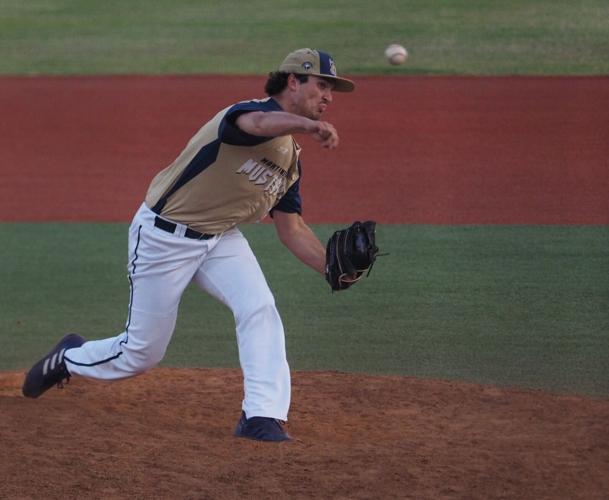 The Martinsville Mustangs split a doubleheader with the Tri-City Chili Peppers on Little League Night at Hooker Field on Friday.

In Game 1, the Mustangs allowed two runs in the top of the first, but tied the score in the bottom half, and mostly held down the Chili Peppers the rest of the way, allowing just single runs in the third and fifth innings.

Martinsville tied the score at 2-2 in the bottom of the first. Christian Easley (UMBC) drew a one-out walk, and Nathan Gorenson (William & Mary) and Colton Frank (Southern University) drew two-out walks to load the bases. Easley and Gorenson both came around to score on a single by Tyler Ross (Bowling Green).

After giving up the lead in the top of the third, Martinsville got out front in the bottom of the frame with two more runs. Frank drew a walk, and moved to third on a double by Ross. Both runners scored after Carlos Amezquita (P&HCC) reached on an error.

Martinsville finished its scoring in the fifth after Nicholas DiPietrantonio (Princeton) scored on a single by Easley. DiPietrantonio also reached on a walk, one of nine walks by the Mustangs in the game.

Easley, a Bassett High School graduate, finished the first game 1-3 with a walk, a run, an RBI, and four stolen bases.

Austin Hansel (Southern University) threw four innings in the start for Martinsville, allowing three runs, one earned, on two hits and a walk. Hansel struck out four in the win.

Riley Bost (Northern Colorado) threw 1.2 innings in relief, allowing one run on two hits and a walk with two strikeouts. Bost left the game in the sixth after getting struck in the face by a line drive. The Mustangs announced the reliever received stitches and was doing well.

Prior to the start of Game 2, Little League baseball players from Martinsville and Henry County were invited to shake hands with the Mustangs starters as they ran onto the field. The young baseball players were allowed free admission into the games if they were wearing their uniforms, and stayed on the field during the national anthem. Many also got autographs from Mustangs players between the two games.

In Game 2, Martinsville took an early 1-0 lead on four walks. With the bases loaded, Cameron Pittman (Radford) drew a walk to score Ross.

Tri-City went on a run from there, scoring two runs in the third, three in the fourth, and two more in the fifth for the entirety of their scoring on the night.

Martinsville added another run in the third. Andrew Amato (High Point) drew a walk to lead off the frame, and moved to second after Amezquita struck out but reached first on a dropped third strike. Amato stole third, and scored on a balk by Tri-City.

The Mustangs scored their third and final run of the game on a comeback attempt in the bottom of the seventh. Frank led off the frame with another walk, and got to third on a double by Ross. Frank came around to score on a groundout by Amezquita.

Brendan Bagwell (Radford) and Drew Mize (SIUE) both walked to load the bases for Martinsville with one out, but the Mustangs couldn’t bring them around. The team finished with a flyout and groundout to end the game.

Martinsville walked 12 times in Game 2, including three walks by Mize and two each by Pittman and Amezquita.

Martinsville improves to 11-11 on the year with the Friday doubleheader split. The Mustangs are currently second in the Coastal Plain League West Division standings.

The team will be back at home on Saturday night for another Coastal Plain League game against the Peninsula Pilots. The Mustangs will next travel to Ting Park in North Carolina on Sunday to take on the Holly Spring Salamanders. First pitch is at 7 p.m.

BLACKSBURG — Virginia Tech was tight-lipped about the whereabouts of running back Malachi Thomas last week.

Wells, who was a two-year starter for the Thundering Herd threw for 3,532 yards last fall (66.3 completion percentage) with 16 touchdowns.

Virginia Dream falls in first round of TBT; A look at how other Virginia teams fared

The Virginia Dream basketball team fell in the first round of The Basketball Tournament on Sunday. The Dream lost to Best Virginia, 75-45, and were eliminated from play.

David and Mike compare UVA and Virginia Tech football media days, and look at the preseason Top 25 poll in Teel and Barber 85.

Delaney Rudd, who played basketball at Wake Forest and spent parts of five seasons in the NBA, shared his basketball story with campers at P&HCC women's basketball camp on Saturday.

BLACKSBURG — In documents submitted to the U.S. Department of Education, the ACC’s 14 football members reported approximately $361 million in total football expenses for 2020-21, ranging from Clemson’s $43.8 million to Georgia Tech’s $19.6 million. The average was $25.8 million.

Deshaun Watson is suspended and fined after settlement between NFL, NFLPA

Deshaun Watson is suspended and fined after settlement between NFL, NFLPA

Martinsville Mustangs players shake hands after an inning during Friday’s doubleheader against the Tri-City Chili Peppers at Hooker Field.

Mustangs reliever Reid Viar rides "Moe's Moped" onto the field before pitching the seventh inning of Game 1 of Friday's doubleheader. Mustangs relievers all ride the mini-bike on the field prior to their appearance, and then it's ridden back to the bullpen.