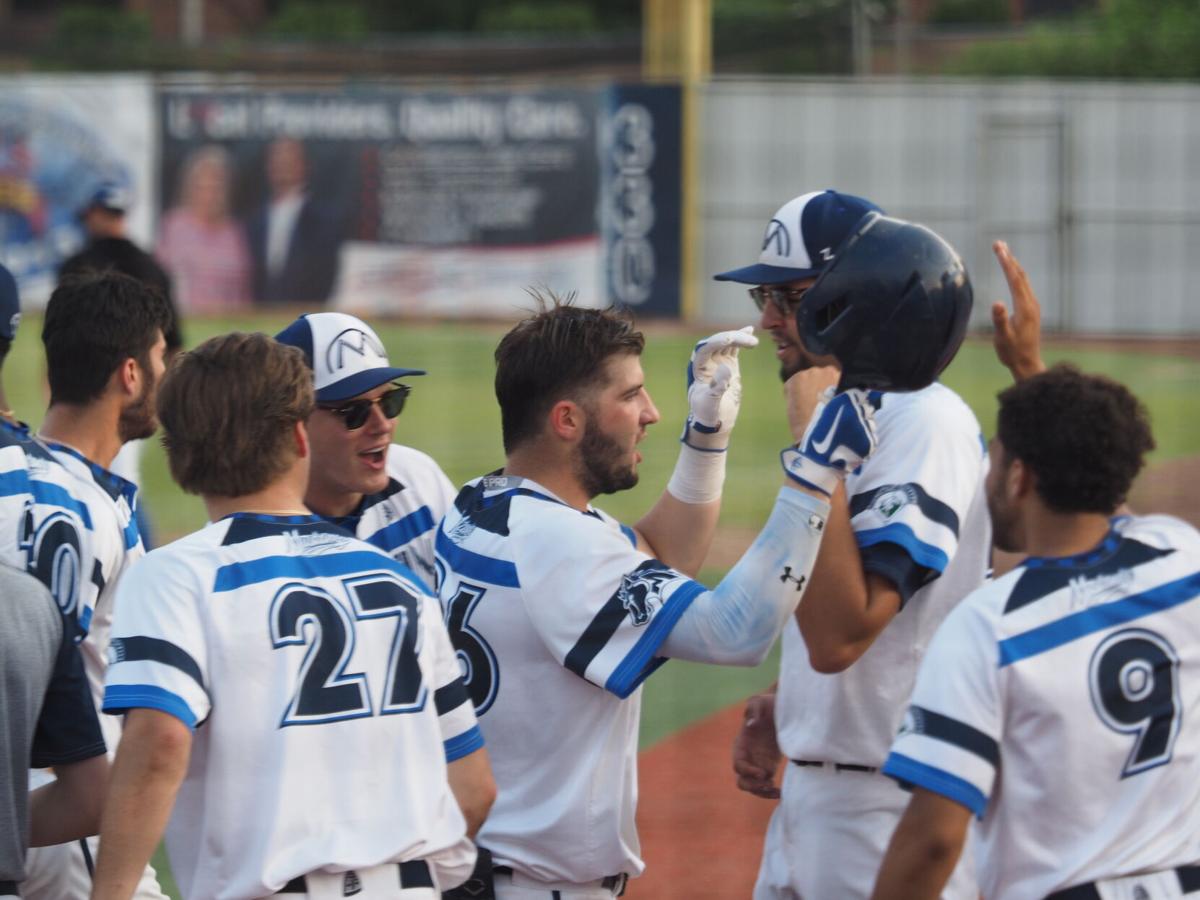 The Martinsville Mustangs (shown above celebrating a home run earlier this month) defeated the Carolina Disco Turkeys on Monday for their fourth straight victory. 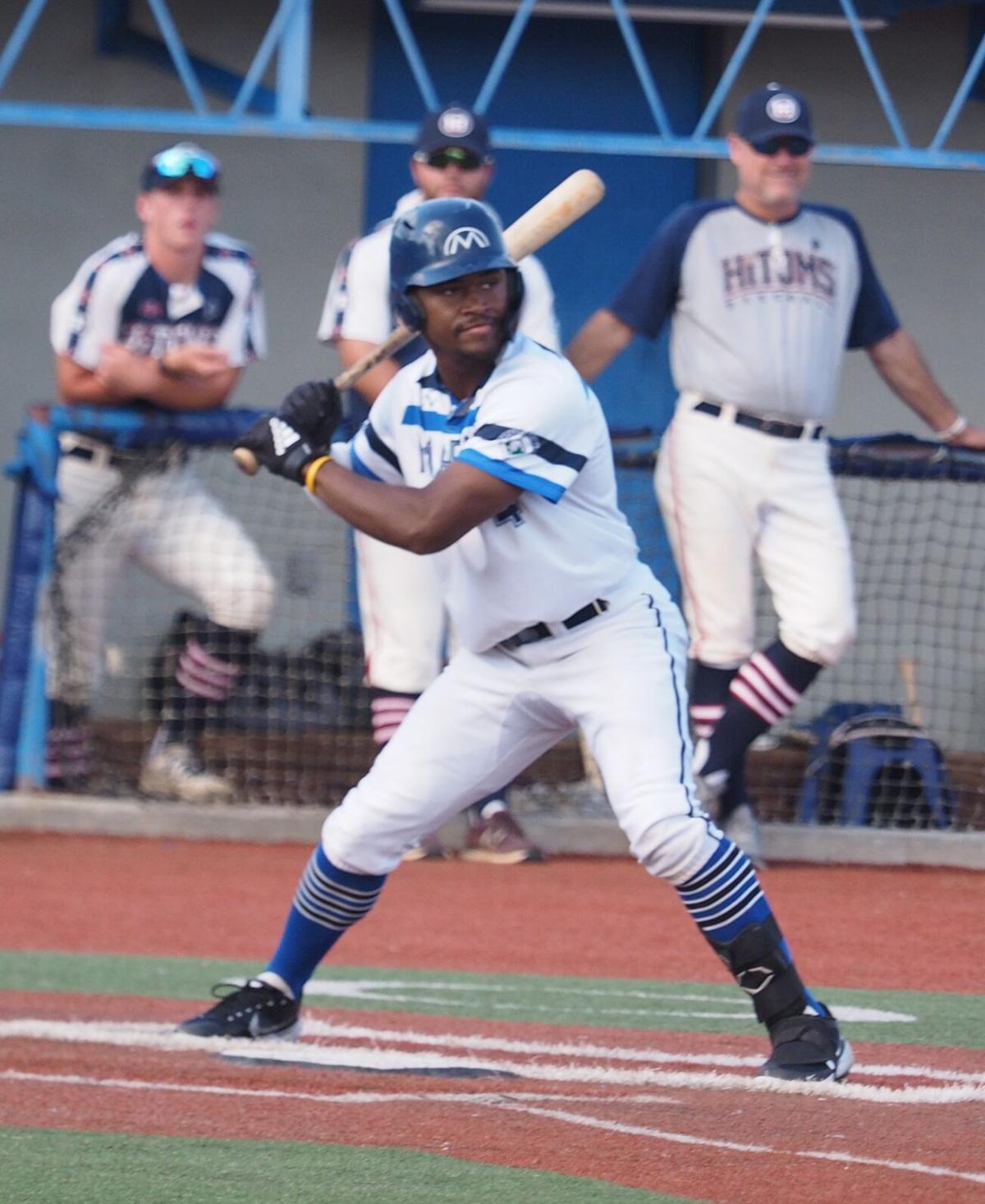 The Martinsville Mustangs have seen struggles in the second half of the season, but the team has turned it around in the last two weeks. With a 7-1 win over the Carolina Disco Turkeys Monday night, Martinsville has now won four straight games and improved to 14-19 on the year.

And not only have the Mustangs been winning, but they’re winning big, outscoring opponents 42-10 and scoring at least 10 runs three times in that 4-game span.

“I feel confident we can get things rolling,” head coach Brandon Nania said to the Bulletin last week. “Our offense is rolling right now. If the pitching staff can just pick it up a little bit, I think we’re going to be able to make a little run at this and try to get into the playoffs.”

Here’s a look at the Mustangs this week:

Team statsMartinsville is hitting .275 as a team this season, with 193 runs scored, sixth most in the Coastal Plain League. The Mustangs are tied for the league lead in triples with 20 as a team. The team is also second in the CPL in hits (280) and doubles (52), and fourth in RBIs (168).

As strong as the hitting as been, though, Martinsville’s pitching staff leads the league in runs allowed (223) and walks (187), and is second in earned runs (186). The Mustangs have a team ERA of 6.59.

In Holt’s lone start last week, he threw a 7-inning complete-game shutout against the Forest City Owls, allowing just two hits while striking out six and walking two. Holt (Mercyhurst) has a 3.27 ERA in seven appearances this season. He’s started four times, and has 24 strikeouts to 14 walks in 33 innings pitched.

Matt Malone (Minot State) is still second in the CPL in batting average, hitting .388 this season. Benny Serrano (Niagara University) is fourth in the league, hitting .370 this season. Serrano is also third in the CPL with nine doubles, and leads the league in a painful category, getting hit by a pitch eight times.

Will Knight (VMI) is second in the CPL with three triples. Knight is hitting .319 and has 12 stolen bases.

Left-handed pitcher Caleb McRoy (NC Central) is fourth in the CPL with 41 strikeouts this season.

Local starsChristian Easley, a Bassett High School and Patrick Henry Community College graduate, has raised his batting average to .349 this season. Nine of Easley’s (UMBC) 30 hits have been for extra bases. He’s scored 30 runs and had 12 RBIs and nine stolen bases.

The other local Mustang, Trey Carter, a Carlisle School graduate, has a 3.93 ERA in seven pitching appearances this summer. Carter (Liberty University) has 18 strikeouts in 16 innings pitched, and has four saves this summer.

Kevin Kopps, a member of the 2020 Mustangs and a right-handed pitcher at the University of Arkansas, was taken by the San Diego Padres in the third round, 99th overall, of the draft. Kopps was a finalist for the Golden Spikes Award for the top player in college baseball this season after finishing the year with a 12-1 record and a 0.90 ERA for the Razorbacks. He allowed just nine runs on the season, and had 131 strikeouts to 18 walks.

According to the Martinsville Mustangs on Twitter, Kopps is now the highest draft pick in team history.

Right-handed pitcher Patrick Halligan, a member of the Mustangs in 2020 and 2021, was also selected in the 13th round of the draft by the Kansas City Royals.

Halligan, from Vienna, Virginia and Pensacola State College, has made four appearances and started two games for the Mustangs this season. he has a 3.24 ERA with nine strikeouts to two walks and seven hits in 8.1 innings pitched.

The Mustangs will play two more home games after a couple days off this week. Martinsville will return to Hooker Field on Thursday for a CPL contest against the High Point-Thomasville HiToms, and they’ll play one more exhibition game on Friday against the Greensboro Monarchs. First pitch for both Thursday and Friday is at 7 p.m.

The Mustangs will finish the week with a doubleheader at McNair Field in North Carolina against the Forest City Owls. Game 1 will begin at 7 p.m.

The Martinsville Ponies, another college summer league team affiliated with the Martinsville Mustangs organization, hit the ground running for the week on Tuesday with a contest against the Greensboro Monarchs at Hooker Field. Results were too late for publication.

Martinsville will play at home again on Wednesday at 6 p.m. against the Statesville Owls. They’ll finish the week on the road at South Iredell High School in Statesville, N.C. on Saturday against the Owls. First pitch is at 7 p.m.

The Martinsville Post 42 Senior Legion team will finish the regular season with back-to-back road doubleheaders this week. Martinsville travelled to Salem’s Kiwanis Field on Tuesday for two games against Roanoke Post 3. Results were too late for publication.

The team will go south to North Carolina on Wednesday for a doubleheader against Mt. Airy Post 123. Game 1 will also begin at 5 p.m.

Post 42 will begin play in the region tournament on Friday at Kiwanis Field. The schedule for the tournament will be released later this week.

Week 4 of the college football season lacks a must-see matchup, but there are plenty of intriguing subplots to follow.

The Martinsville Mustangs (shown above celebrating a home run earlier this month) defeated the Carolina Disco Turkeys on Monday for their fourth straight victory.