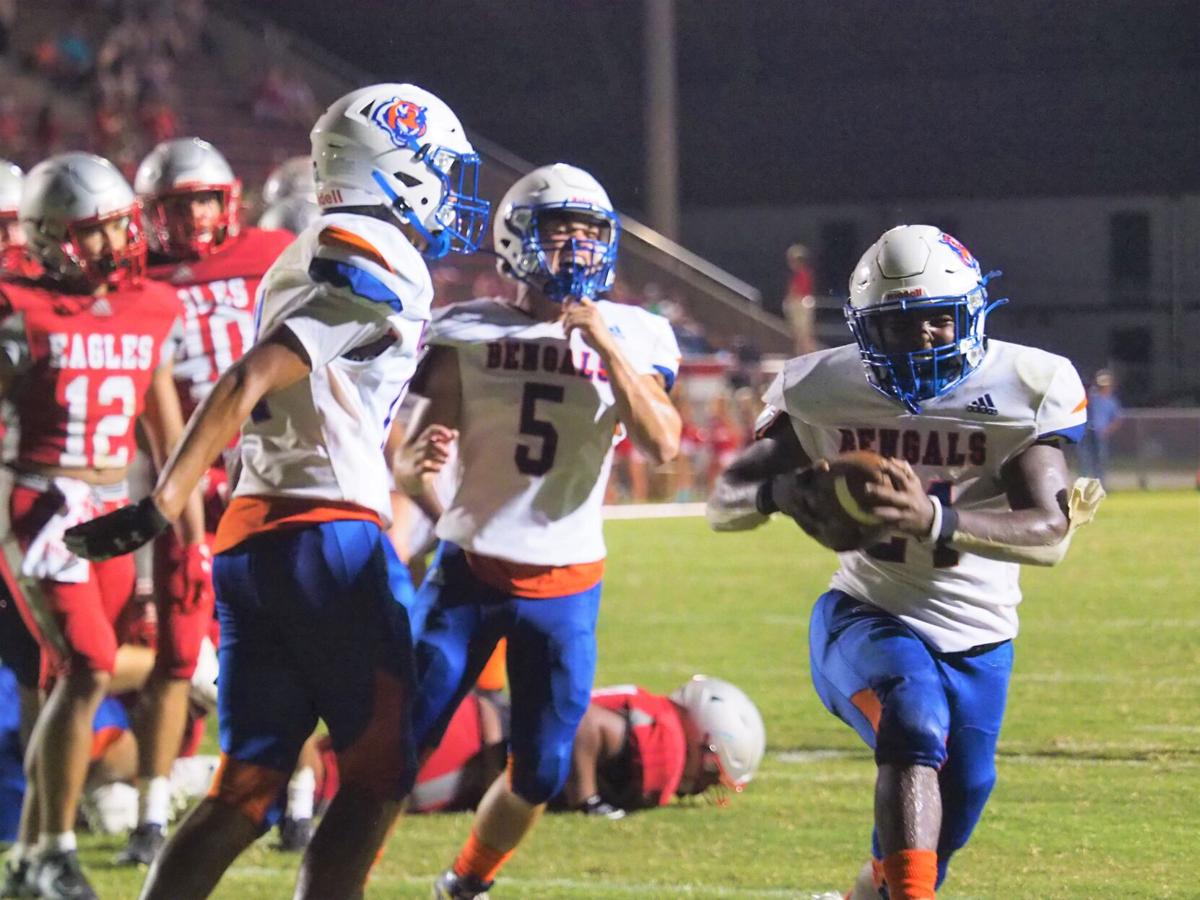 Bassett High School senior Simeon Walker-Muse (24) runs into the endzone for a touchdown during a game this season against Franklin County High School. Walker-Muse has seven touchdowns in three games this fall. 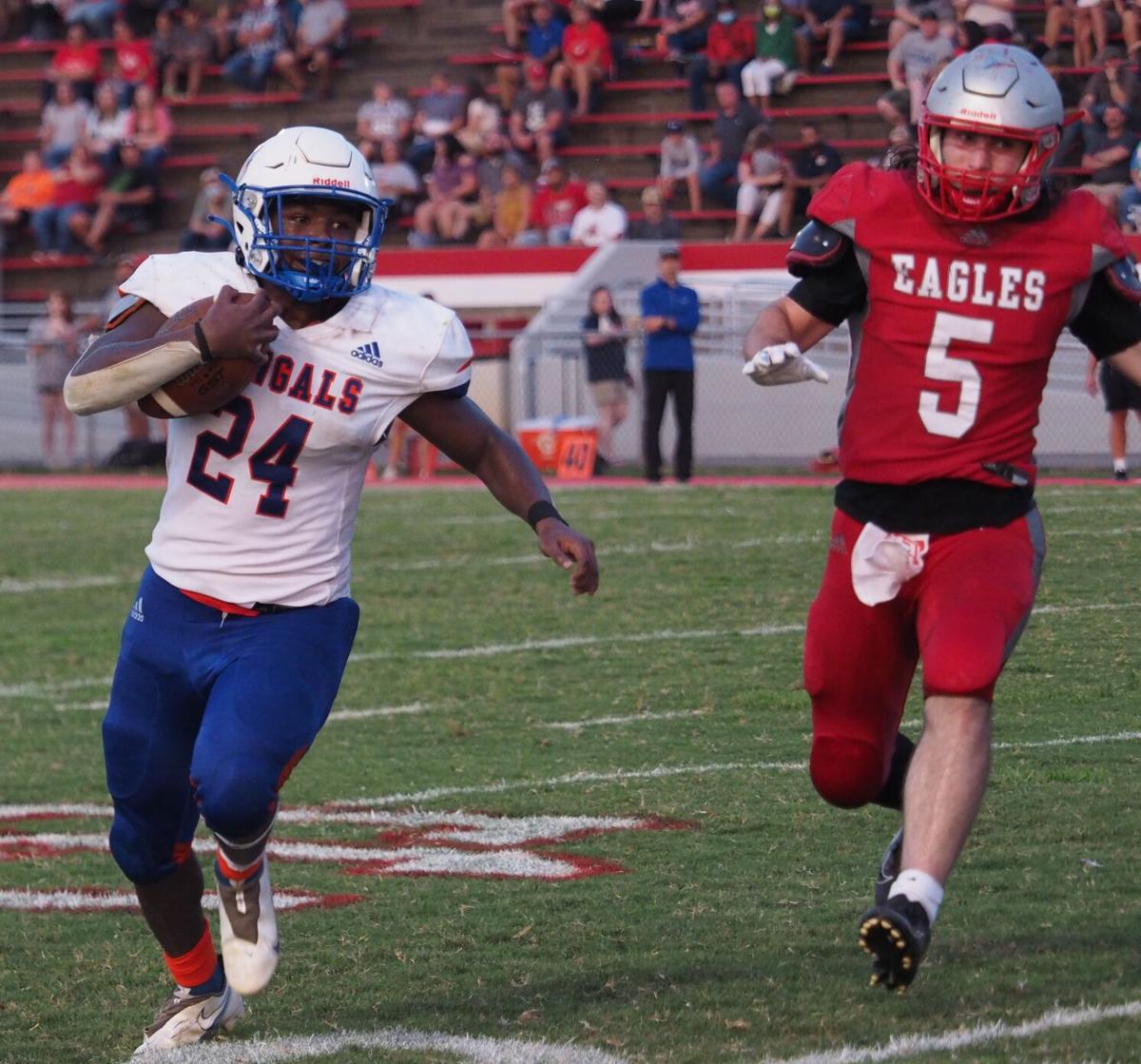 Bassett High School senior running back Simeon Walker-Muse (24) is averaging 9.15 yards per carry in 58 rushes so far this season. 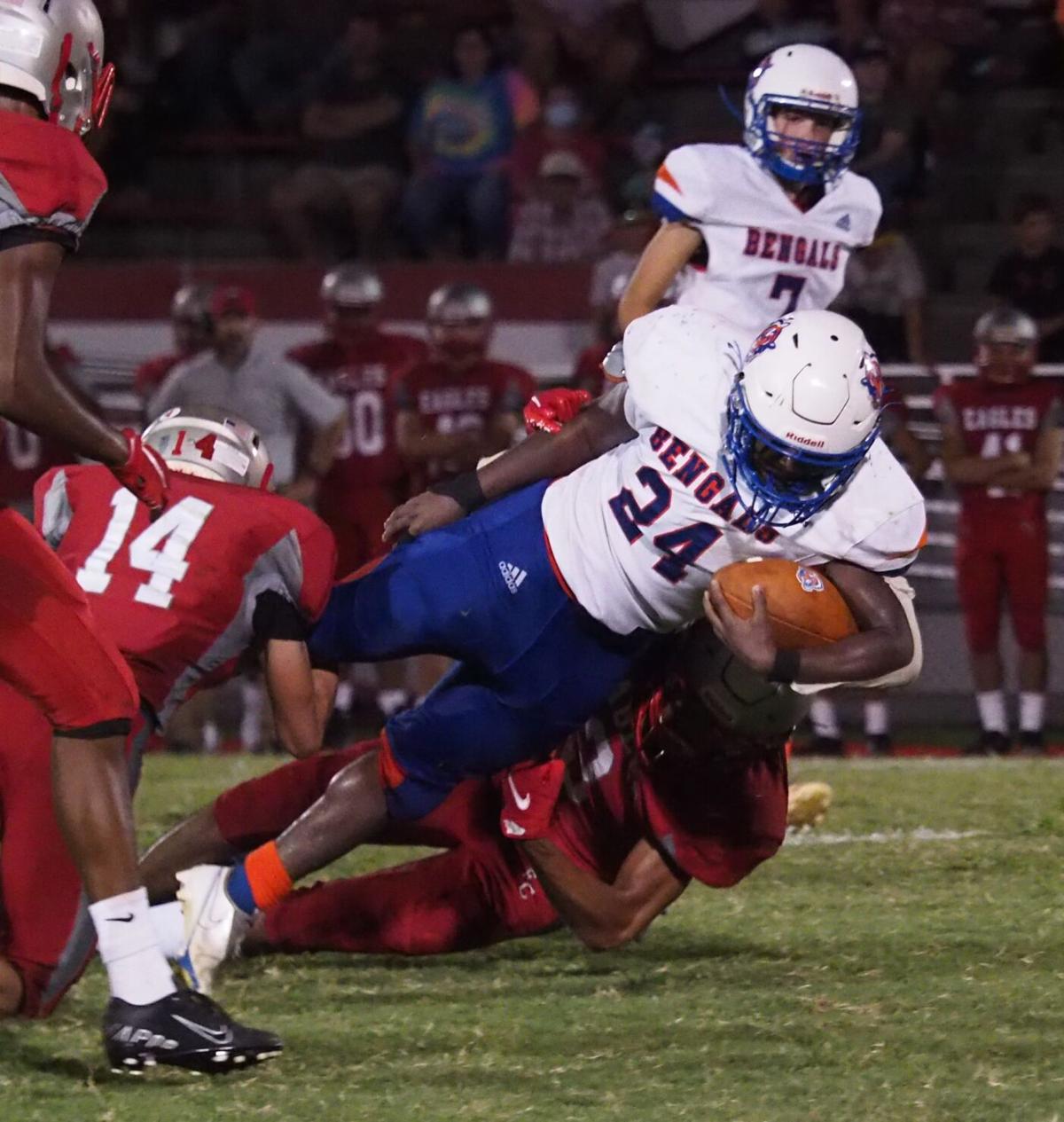 Bassett High School football coach Brandon Johnson said of senior running back Simeon Walker-Muse (24): “His vision, his speed, his strength, his balance, everything has just gotten better… it’s hard to tackle him.”

When Simeon Walker-Muse was in middle school, he looked up to the football players at Bassett High School.

Football was a sport the now BHS senior began playing when he was about four years old. He was inspired by his dad and grandfather, who also played.

Even though the Bengal also played baseball, basketball, and soccer growing up, there was just something different about getting out on the gridiron.

“It’s just a different type of a game than the others,” Walker-Muse said in a recent interview. “A baseball game, yea, it’s fun. Basketball, it’s entertaining. Football, it’s just something totally different. You can’t really explain it.”

When he remembers watching the players he used to look up to as a young Bengal, Walker-Muse has different feelings about football now that he’s in his final season with the team.

“From seeing in middle school, watching people play that I used to look up to, it feels totally different now because I’m in their shoes… Now I feel like people are looking up at me.

“Without a doubt, that gives me a reason to keep playing.”

For those watching Bassett football games this season, they’ve already seen a show from Walker-Muse. In three games, the running back has rushed for 531 yards and seven touchdown. He’s scored at least two touchdowns and ran for at least 165 yards in all three games, and is averaging 9.15 yards per carry.

The senior didn’t have milestones or specific goals he wanted to achieve coming into the season, but after the second game he started thinking about school rushing and touchdown he’d like to reach, giving him more motivation to end his career on a high note.

Bassett football coach Brandon Johnson said, while there are many reasons for Walker-Muse’s hot start this fall, it’s more just him proving who he is as an offensive weapon.

“Our O-Line and then him,” Johnson said. “Our quarterback is making the right reads and he (Walker-Muse) does a great job with his vision and his speed and staying balanced.

“He’s a great all-around back. We could probably throw the ball to him more but we don’t have to. I think just our team being so dynamic in a lot of difference positions, it opens it up for him. You can’t pack the box with us when we have a great quarterback and great receivers. So we can get in light boxes and he makes the most out of it.”

Walker-Muse moved up to varsity early in his sophomore year after Johnson saw him in a junior varsity game, “when nobody could tackle him,” he said.

“I was thinking to myself, he’s not getting better and we need to put him on varsity,” Johnson added.

That season, the Bengals had running back Kevon Smith, a bigger, hard-hitting back, allowing Walker-Muse to provide a change of pace.

During his junior year – a shortened season moved to the spring due to the coronavirus pandemic—Walker-Muse came close to reaching 1,000 rushing yards, but had to quarantine and miss the team’s final game against Floyd County and came up just short of the milestone.

In the three years since Walker-Muse joined the Bengals varsity team, Johnson has enjoyed seeing the growth in the player he calls “one of the best running back I think I’ve coached.”

“The first day he was a short butterball, he really was,” Johnson said. “And he just has transformed his body.”

“It’s been insane. His vision, his speed, his strength, his balance, everything has just gotten better… He’s seeing holes, the offensive line is making holes, and it’s hard to tackle him.”

“My freshman year it wasn’t really juking, anything like that. It was just get as many yards as you can,” Walker-Muse said. “But now I can read the field way more, see what blocks are being made, what holes are opening, whereas when I was freshman I didn’t see that at all.”

It was the second game of the season, when Bassett played Liberty Christian Academy, when Johnson saw who Walker-Muse has become as a football player.

“Those guys probably outweigh him 100, 150 pounds and he just runs through them,” he said. “That’s just him. That’s his character, his demeanor. A kid, as a young man, he hasn’t always had it easy but he pushes through and he comes out on top every time. His grit is just amazing.

“I personally think from the time he started carrying the ball for us to now, in that three year stretch, he’s every year made a little gain and been the best running back in the Piedmont (District). I think this year, in my opinion, he’s up there. He’s at least top two or three, if not the best, and I think he’s showing everybody that.”

Walker-Muse doesn’t really know why he chose football over all those other sports he grew up playing, but he knows why he loves it now.

It’s the motivation to work towards a goal and have young athletes look up to him, while also being a part of the Bengals family he grew up admiring.

“I’d say the enjoyment in my teammates, you can tell from when we first started to now we have way more love for the game of football than we used to.

“It motivates me a lot because most of us have been playing since Day 1 so we have a good chemistry. Even if we weren’t playing from Day 1, Johnson preaches family so by now pretty much everybody here is family.”

Changes in the original schedule means the Bassett football team will have a bye this week and return on September 24 for a home game against William Byrd at 7 p.m.

With a win on Tuesday to take the Piedmont District regular season title, the Bassett volleyball team feels they're peaking at the right time as they now begin postseason play.

G.W. held Bassett's offense to just one touchdown in a 21-7 win over the Bengals in Danville Friday night.

Bassett and G.W.-Danville are the top two football teams in the Piedmont District, not just in the standings but in virtually every statistical category. Here's a preview for the Bengals and Eagles game Friday in Danville, as well as a look at Halifax at Patrick County.

High School Volleyball: Magna Vista not dwelling on loss as they look toward the postseason

Even though the Magna Vista volleyball team finished the regular season with a loss, a strong year has the Warriors feeling confident as they now move to the playoffs.

Magna Vista opened the PD tournament with a straight-sets win over G.W.-Danville in Ridgeway Thursday night.

Bassett High School senior Simeon Walker-Muse (24) runs into the endzone for a touchdown during a game this season against Franklin County High School. Walker-Muse has seven touchdowns in three games this fall.

Bassett High School senior running back Simeon Walker-Muse (24) is averaging 9.15 yards per carry in 58 rushes so far this season.

Bassett High School football coach Brandon Johnson said of senior running back Simeon Walker-Muse (24): “His vision, his speed, his strength, his balance, everything has just gotten better… it’s hard to tackle him.”