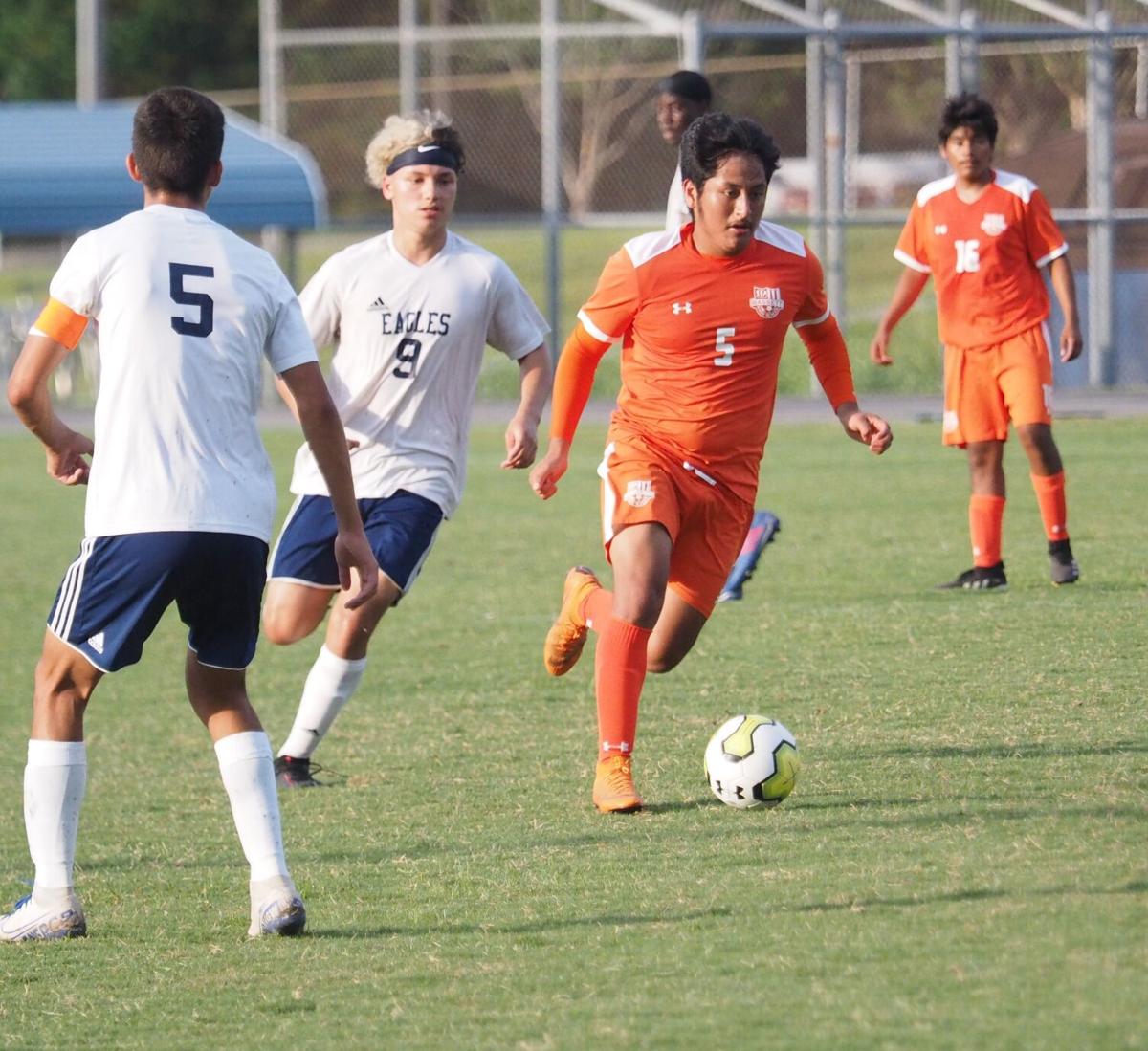 Bassett senior Atzel Garcia-Lopez dribbles up the field during Tuesday's win at home over G.W.-Danville. Garcia-Lopez had a goal in the victory. 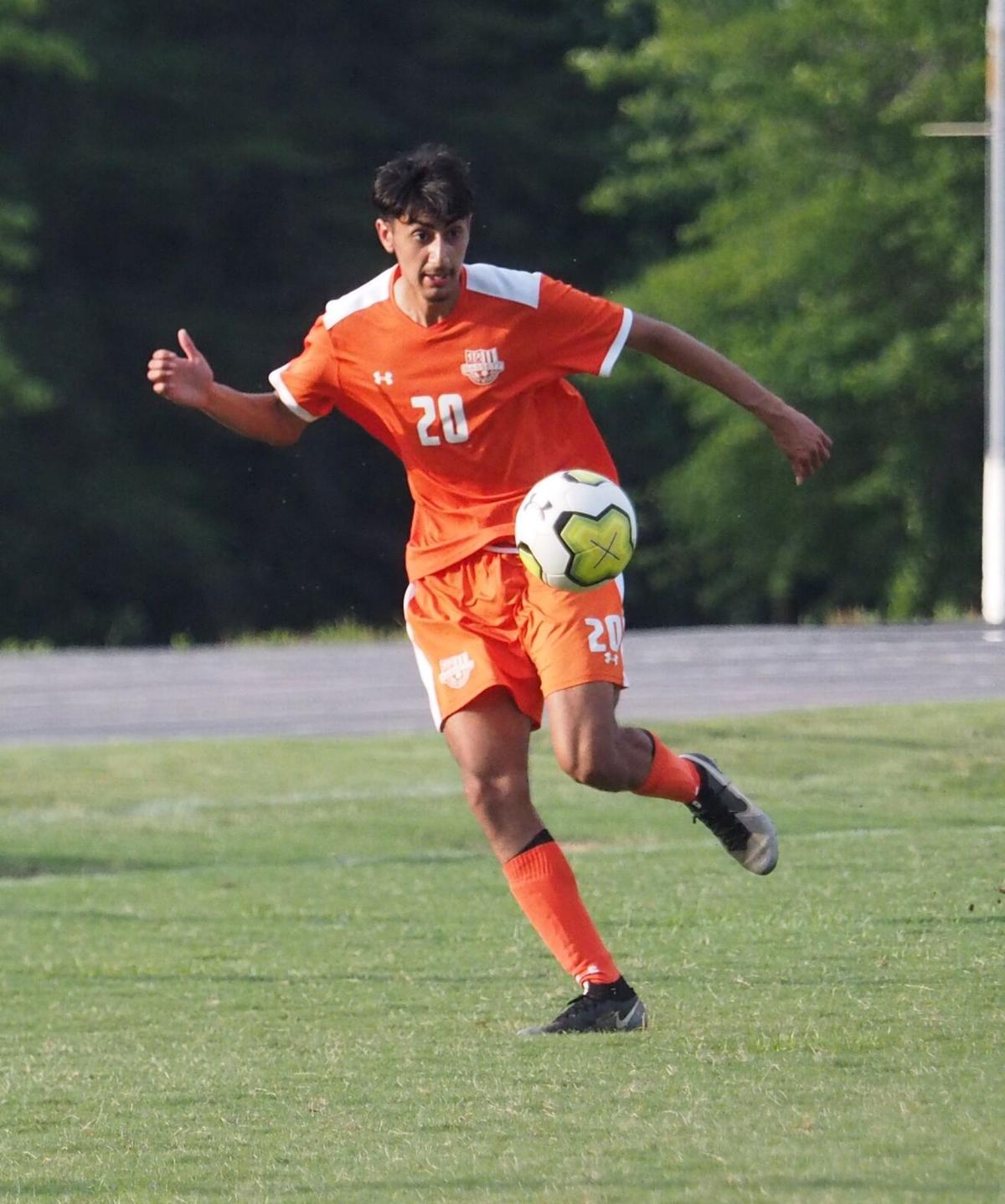 Samuel Aboytes gathers a loose ball during Tuesday’s win at home against G.W.-Danville. 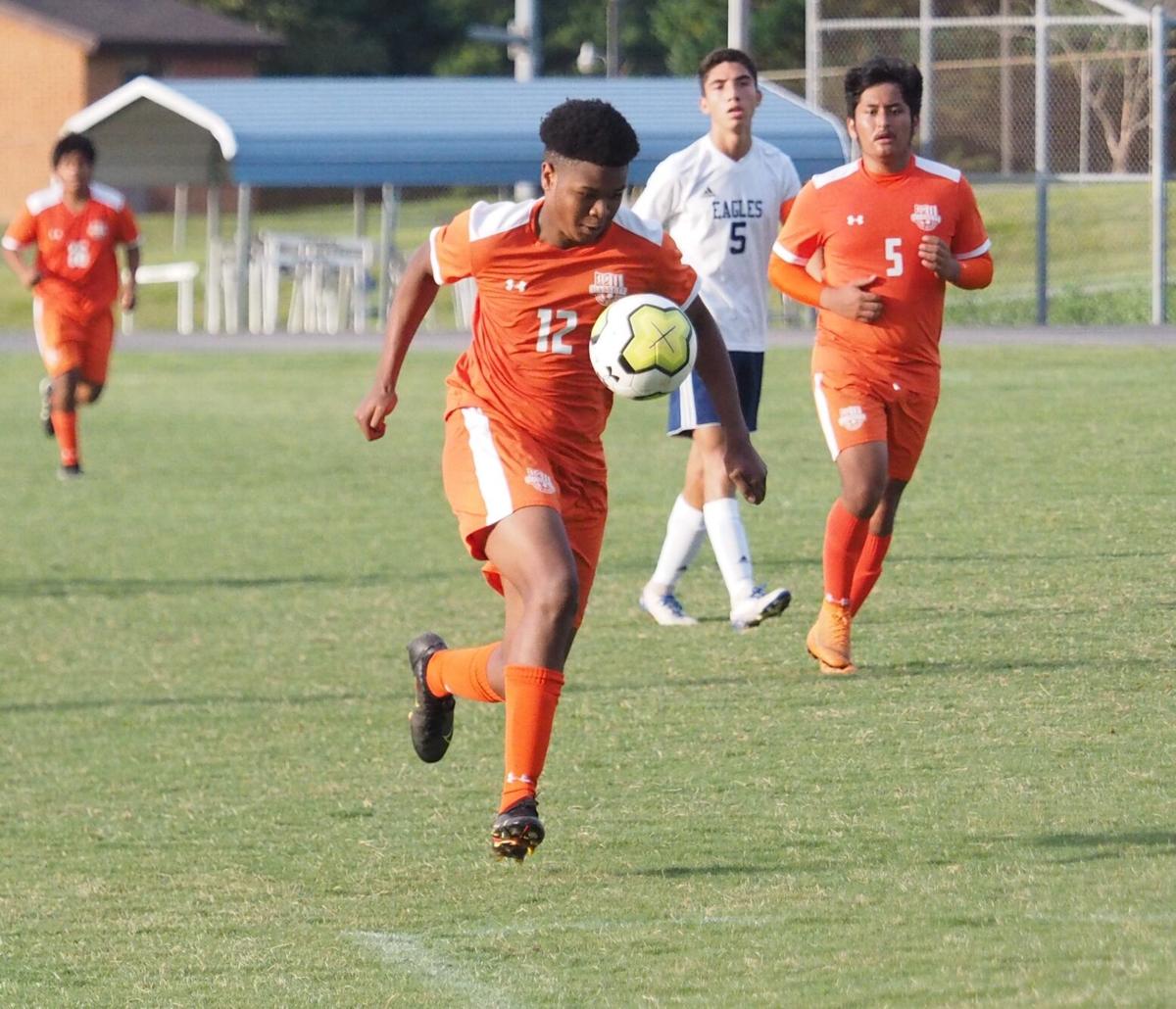 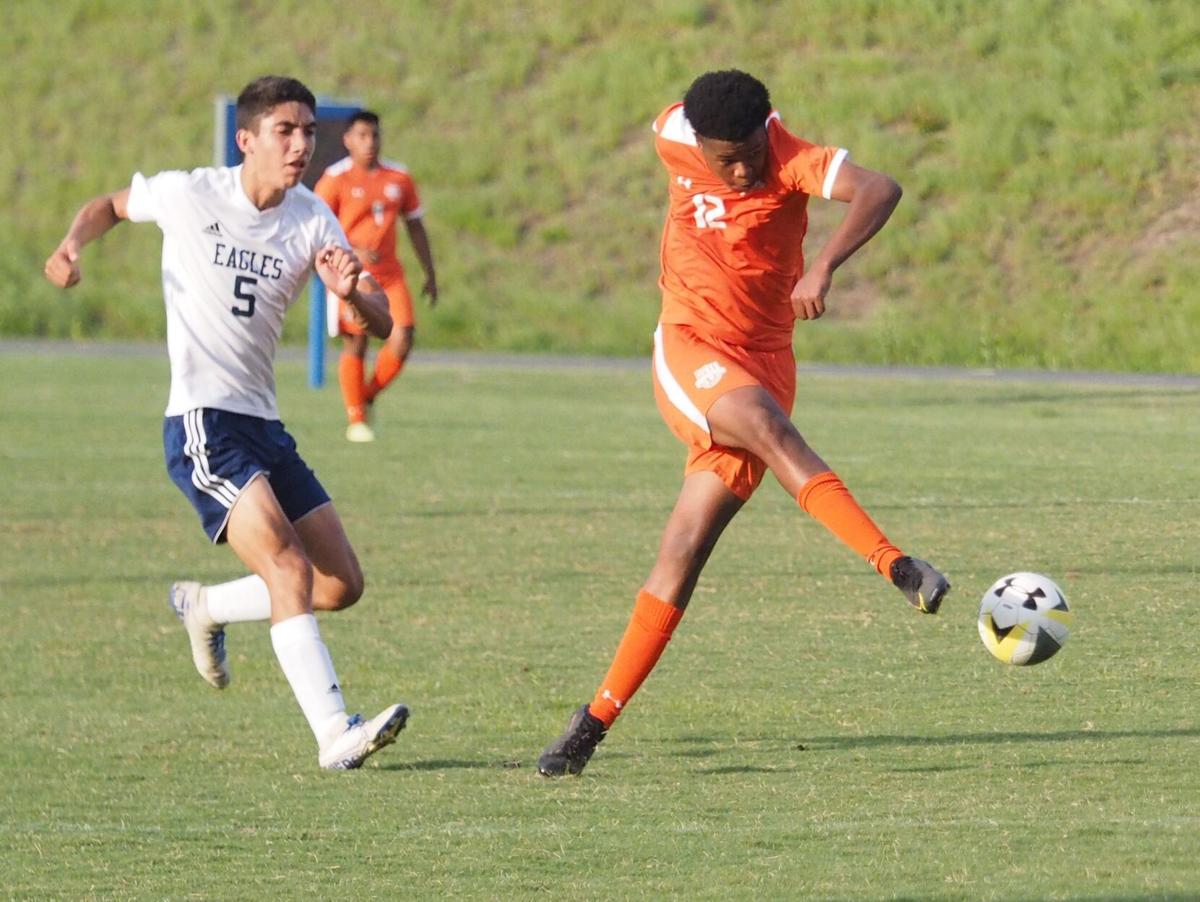 Bassett’s D’Andre McGill gets a shot off during Tuesday’s win at home over G.W.-Danville. 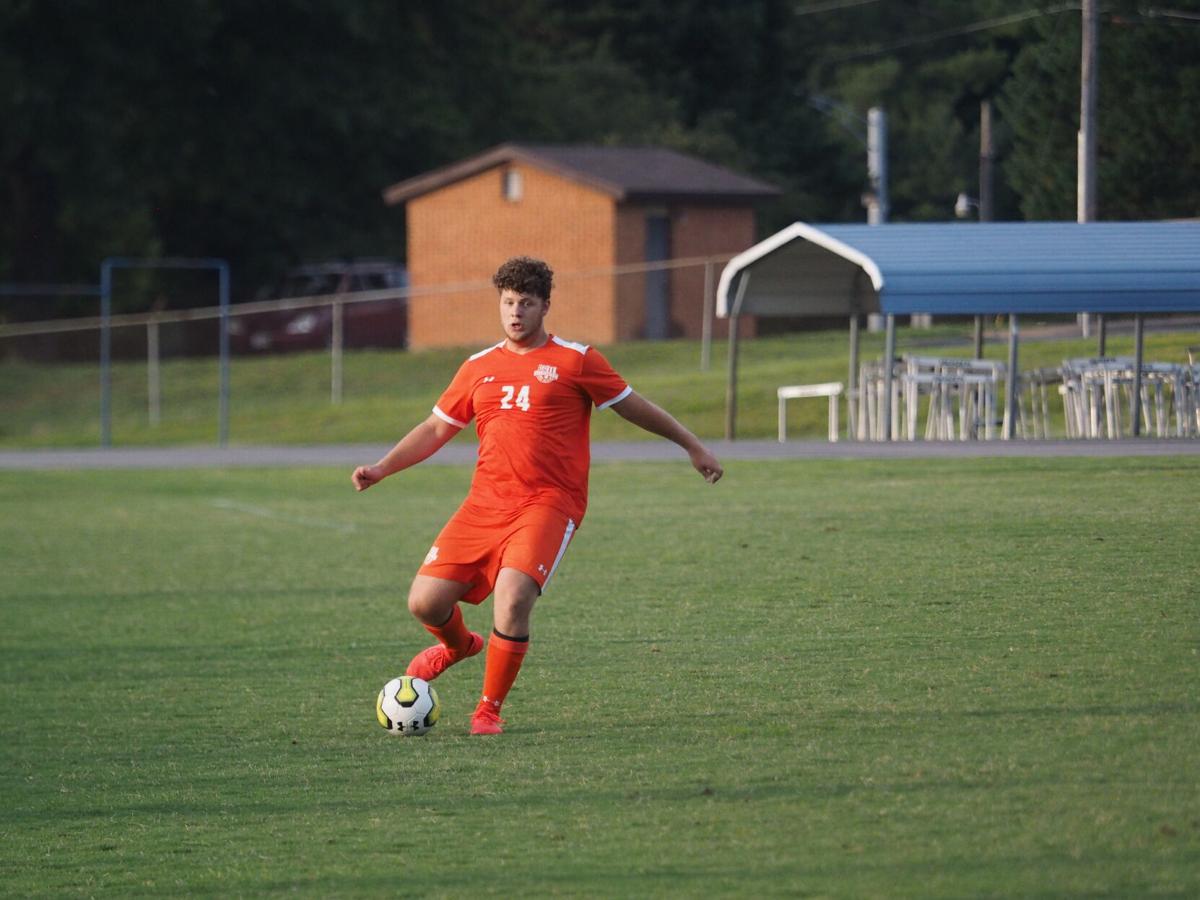 Bassett’s Cannon Sechrist looks to pass during Tuesday’s win at home over G.W.-Danville. 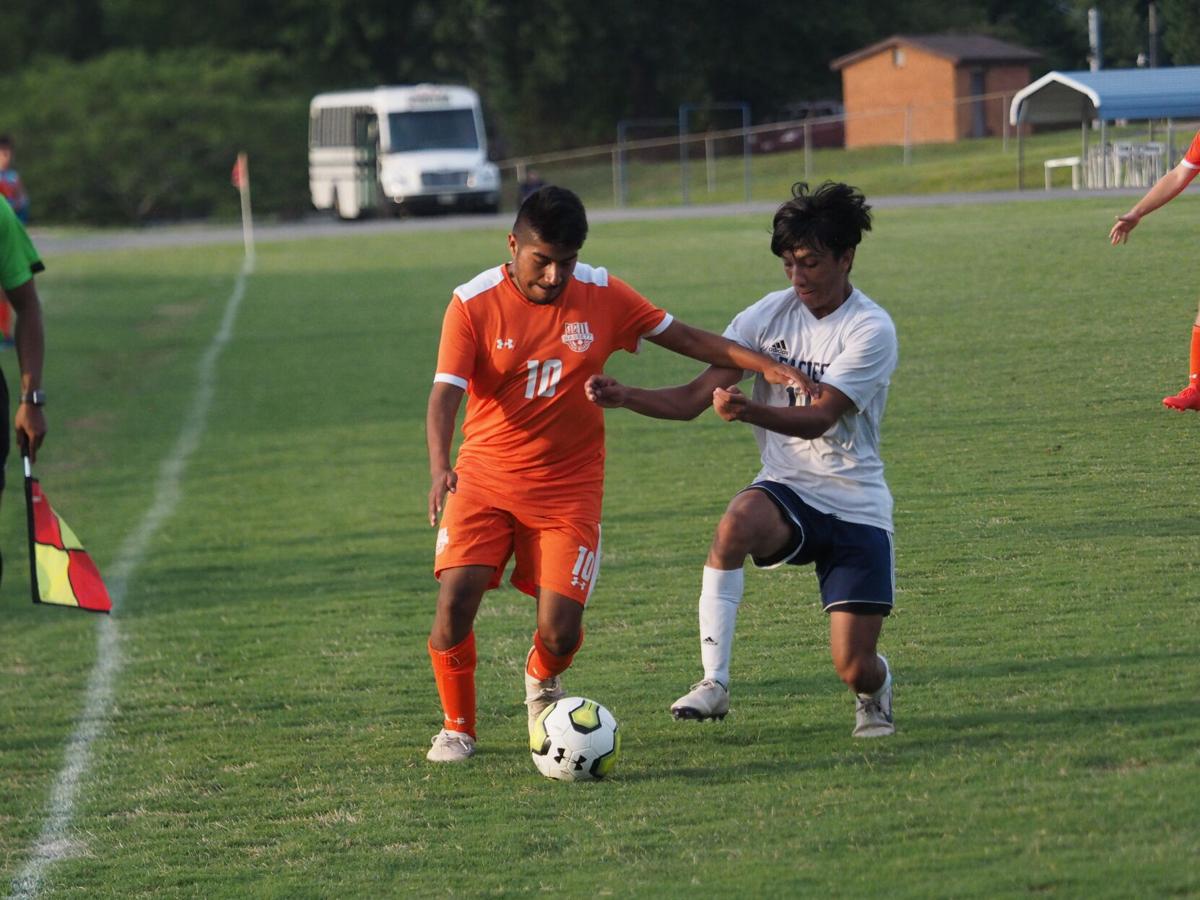 Bassett’s Bradley Vasconcelo dribbles around a G.W.-Danville defender during Tuesday’s win over the Eagles at Bassett High School.

Jacob Tisdale Special to the Bulletin

Bassett’s boys soccer team secured a 3-0 victory against G.W.-Danville while celebrating their seniors Tuesday night. The Bengals steadily applied pressure throughout the match with goals from senior captains Atzel Garcia-Lopez and Daniel Devivo, as well as sophomore José Cruz.

Bassett spent the early stages of the contest finding their footing against a robust Eagles team, but the Bengals quickly became comfortable. Bassett dominated possession for most of the match and presented a constant threat to G.W.’s backline, shooting 23 times while the Eagles took only four shots.

“I thought we did a better job of possessing the ball than they did,” Basset head coach Larry Wylie said of what pushed his team over the competition. “They have got a lot of speed, a lot of athleticism, but I felt that we possessed a little better.”

That sustained possession and persistent shooting gave the Bengals the advantage in the 15th minute on a sharply struck goal from Garcia-Lopez, assisted by Jesus Espana. Garcia-Lopez is a member of a senior class that Wylie attributes a lot of credit to.

“There’s a lot of intangibles that hurt when you lose a class of seniors like we’re losing,” Wylie said. “We’re losing the communication, the locker room demeanor, the leadership on and off the field, the leadership in training. We don’t have a real vocal senior class, but when they do speak they’re very smart and very intelligent about the game and everybody listens.”

Another member of that senior class doubled the lead in the 35th minute. A well-placed corner kick by Hector Maya allowed DeVivo to come flying in from the top of the box and score on a diving header.

DeVivo, a Patrick Henry Community College commit, was active throughout the game, leading Bassett in shots with five.

As the second half arrived, G.W. shored up its defense against Bassett’s attack. The Eagles’ keeper, Dylan Gluhareff, made eight saves on the evening, seven of which came in the second half.

“In the first half our set pieces were not executed very well,” Wylie said. “In the second half I thought we did a great job executing our set pieces, we just couldn’t find it. The keeper made a couple really great saves.”

The scoring would slow down for the Bengals but not before Cruz broke loose for the final goal in the 57th minute, weaving his way past multiple defenders en route to a 3-0 lead.

The defense would hold strong the rest of the way, sealing the win.

Wylie had the future on his mind immediately after the victory. The Bengals will play rival Magna Vista at home on Thursday night.

Bassett has experienced a near perfect regular season this year with an 8-1 record. The one blemish came in early May against the undefeated Warriors. The last time the rivals faced off at the Smith River Sports Complex, Magna Vista came out on top with 2-0 victory. Both goals were scored by the Warriors’ senior Finley Underwood.

The Bengals will look to better contain Magna Vista’s offensive attack, taking the momentum their defense built on Tuesday night into their final regular season matchup.

Should the Warriors break through the effective Bassett backline, the Bengals will look for a big game from sophomore keeper Alex Hernandez. While he only needed to make one save Tuesday night, Hernandez made seven in the previous match against Magna Vista.

Thursday’s game will determine the Piedmont District’s regular season champion. A Warriors victory would clinch them the title, but if Bassett comes away with the victory and evens the teams’ records, the two will be named co-champions. Usually a subsequent playoff would be held to determine the district’s winner, but due to the circumstances of the condensed 2021 season, a compromise will be made in that instance.

After the champions are determined, the Bengals will prepare themselves for the regional tournament. Despite the sound win Tuesday, Wylie isn’t satisfied yet.

“I still don’t feel that we played our game like we need to play going forward,” he said about what he’s still looking for out of his team down the stretch. “Going to the regional playoffs, they’re going to have just as many actual soccer players, if not more than what we do, so we need to really be proficient in our system and in our set-pieces.”

Wylie says he wants to see fundamental improvements worked on moving forward to get his team in the best shape for the matchups ahead.

“We need to work on our first touch a little bit,” he said. “I think if we can get two more players improving on their first touch with the system that we run and the way we can move the ball when we’re on, we have a good opportunity to advance at least a couple rounds.”

Bassett will compete for the Piedmont District regular season title against Magna Vista Thursday night at 6 p.m. at Bassett High School. Following that game, the teams will await seeding in the Region 3D playoffs, which is scheduled to begin next week.

Detroit Lions embrace being underdogs in 2021

What will it take for the Giants to take down the Dodgers?

What will it take for the Giants to take down the Dodgers?

What impacted the line move on the Dodgers?

What impacted the line move on the Dodgers?

For several years, local high school coaches have been talking about putting together a summer golf series for young athletes in the area. Now that the coaches have put the plan into action, it was “mission accomplished” as they now look to the future.

Bassett senior Atzel Garcia-Lopez dribbles up the field during Tuesday's win at home over G.W.-Danville. Garcia-Lopez had a goal in the victory.

Samuel Aboytes gathers a loose ball during Tuesday’s win at home against G.W.-Danville.

Bassett’s D’Andre McGill gets a shot off during Tuesday’s win at home over G.W.-Danville.

Bassett’s Cannon Sechrist looks to pass during Tuesday’s win at home over G.W.-Danville.

Bassett’s Bradley Vasconcelo dribbles around a G.W.-Danville defender during Tuesday’s win over the Eagles at Bassett High School.