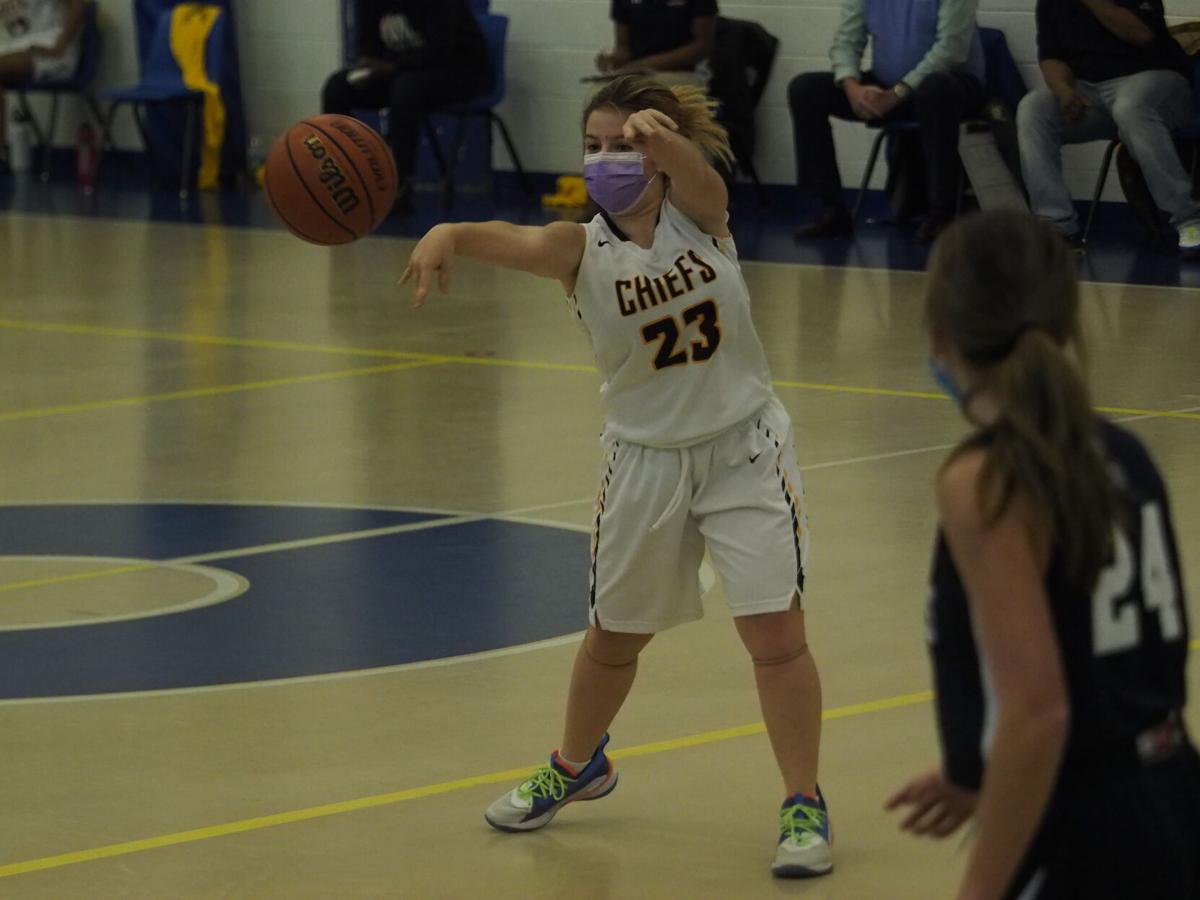 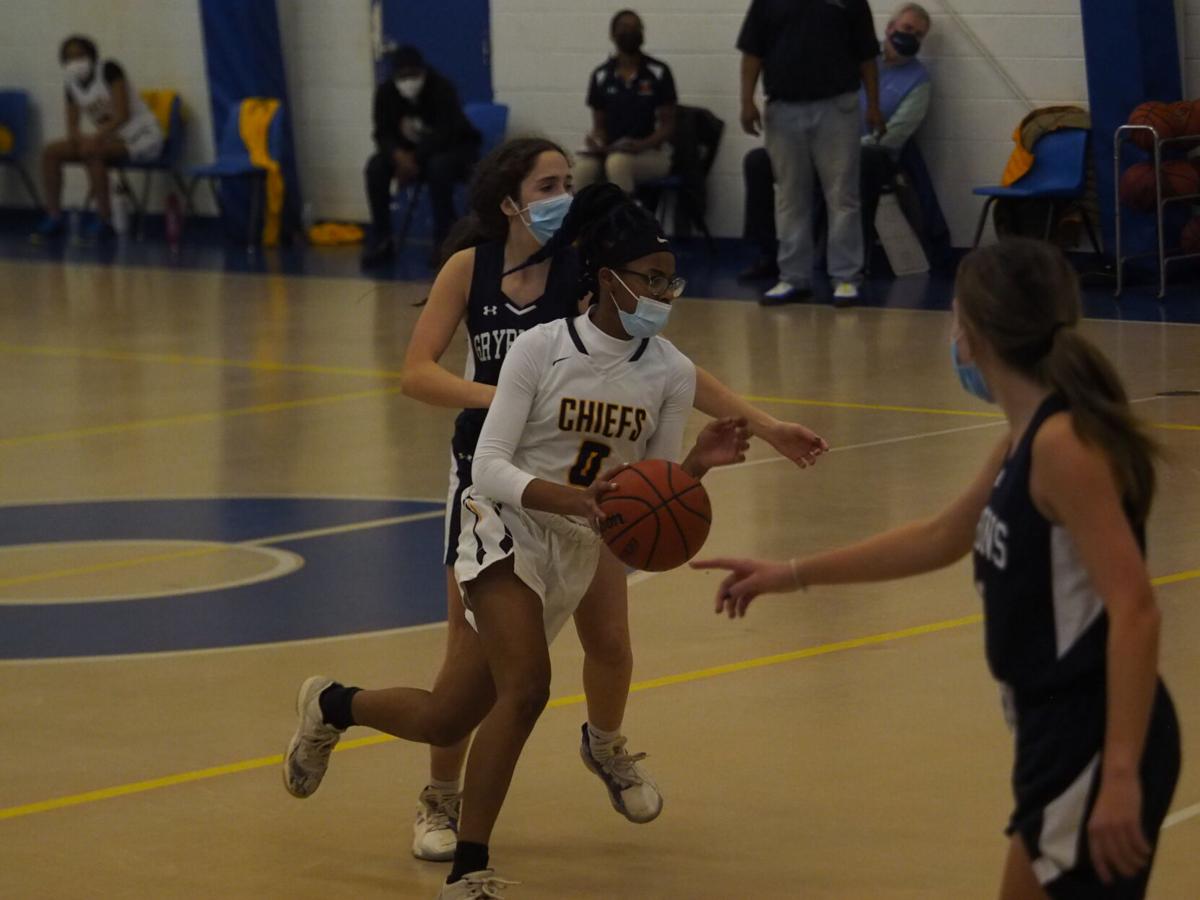 Carlisle's Jala Mays dribbles around a New Covenant defender during a game earlier this season.

Unlike in normal years, this year’s basketball season featured many new rules and regulations, all of which were tested for the first time during the Chiefs’ contest against New Covenant. No more than 25 spectators could be in the stands, all of whom had to be a parent of one of the players on either team. Everyone coming in also had to have their temperature checked and had to wear a mask the entire time they were inside the building.

The spectators watched players who also wore masks the entire game. There was no pre- or postgame handshake, only fist bumps between the coaches and referees.

The start of the game was marked with a simple out-of-bounds throw-in by the away team, rather than the traditional jump ball.

It was different, but necessary, and Brightwell said the players were happy to oblige if it meant they were able to play games amid the coronavirus pandemic.

“I actually felt like it went really well. I was a little nervous beforehand,” she said. “I know it’s so much to ask these kids to get out here and play with a mask, but they are committed to it. They want to play and it’s just the way it has to be. They are willing to do it. They practice with a mask… They understand that is just part of their normal right now and for them to play they’re willing to make that sacrifice.”

There were only 14 parents in the stands once the game got going Monday, and an additional two video and stat keepers for New Covenant. Anyone else who wanted to watch the game could view a livestream on Carlisle’s YouTube page. Brightwell said the school plans to livestream all home games this season as long as they can have someone working it on the backend.

Just about every other team Carlisle will play road contests against will also stream games, Brightwell said.

Even with restrictions and a season that’s started about a month later than normal, Brighwell said it was “kind of surreal” to see how far the school and society has come since sports were shut down by COVID-19 back in March.

“To see these girls out here and to see coach (Mancino) Craighead back on the side, it’s truly just a good feeling,” she said. “It would have been even better had they won, but win or lose to see them out here it’s a great feeling. It really is.”

Craighead returns Carlisle head coach Mancino Craighead returned to the team this year after stepping away from the game last season. Craighead said he was nervous to get back on the sidelines Monday night, but he was elated to be back.

“It felt so good to be back on the court,” he said. “I talked to my assistants before the game and told them how nervous I was. It really felt like my first game all over again. I was nervous the whole day, I had butterflies in my stomach.”

Carlisle was playing with three eighth graders and started another freshman Monday night. With the delayed start to the season and a small roster of only eight players, Craighead said he took the season opener as a scrimmage given the players haven’t had a chance to practice much and play against another team.

“We haven’t been able to get up and down the court because we have such low numbers,” Craighead said. “Tonight allowed the coaches to see what we have, what we don’t have, what we need to work on, our strengths and weakness. That was a plus for me.”

There were nerves among the Chiefs’ young players, most of whom were playing in a varsity game for the first time, especially taking on a New Covenant team that finished second in the Blue Ridge Conference a season ago.

The Chiefs were without Jaeda Manns, a junior transfer from Magna Vista High School that Craighead was hoping to be one of the team’s top scorers this season. Mays has a broken finger and will be out at least three weeks.

Craighead said even with the tests his team faced, he saw a difference in them from the first to the second half Monday night, and he knows his players are up the challenge the rest of the season.

“That was a good contest for us,” Craighead said. “I told the girls, ‘Just play hard, play tough and whatever happens happens.’

“It’s not about winning or losing this year, it’s about rebuilding this program and teaching these younger girls the right way of playing the game and I think tonight was a good step in the right direction.

“I’m looking forward to this season. I told the girls, ‘It is what it is. We lost tonight but we’re going to get better each and every day.’”

Cara Cooper is the sports editor of the Martinsville Bulletin. She can be reached at cara.cooper@martinsvillebulletin.com

Area scores for Friday, May 7

Scores from around the area Friday night, including a Magna Vista soccer sweep of Bassett.

Carlisle's Jala Mays dribbles around a New Covenant defender during a game earlier this season.