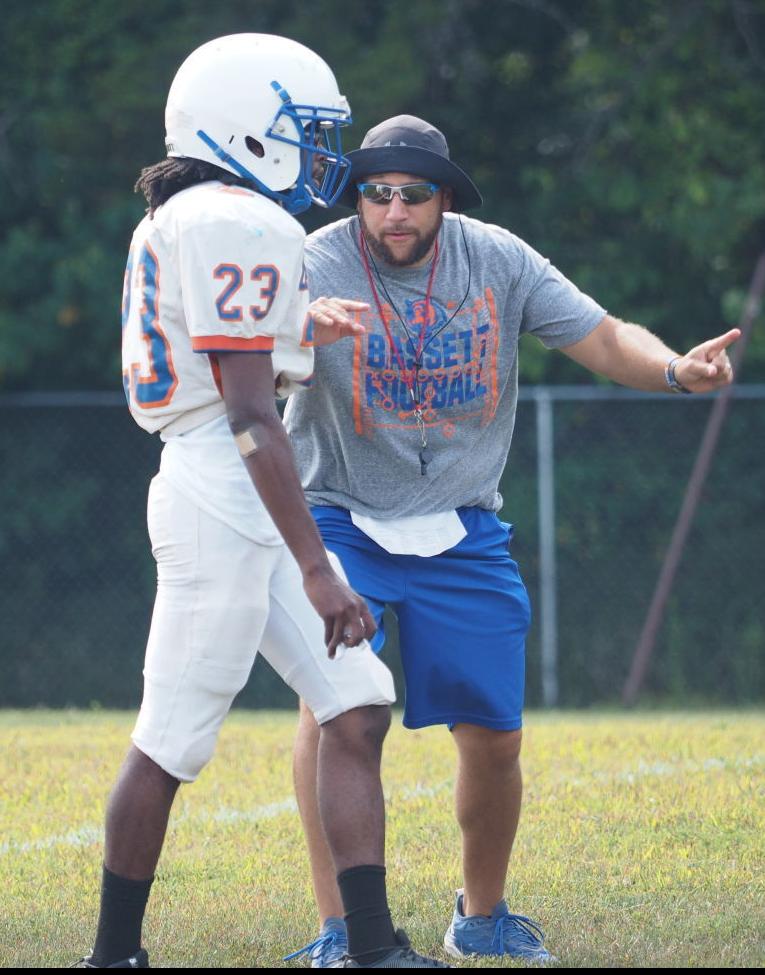 Bassett football coach Brandon Johnson, shown here at a practice in 2019, said he was like a kid on Christmas morning the first time his team was able to practice this spring after 15 months off. 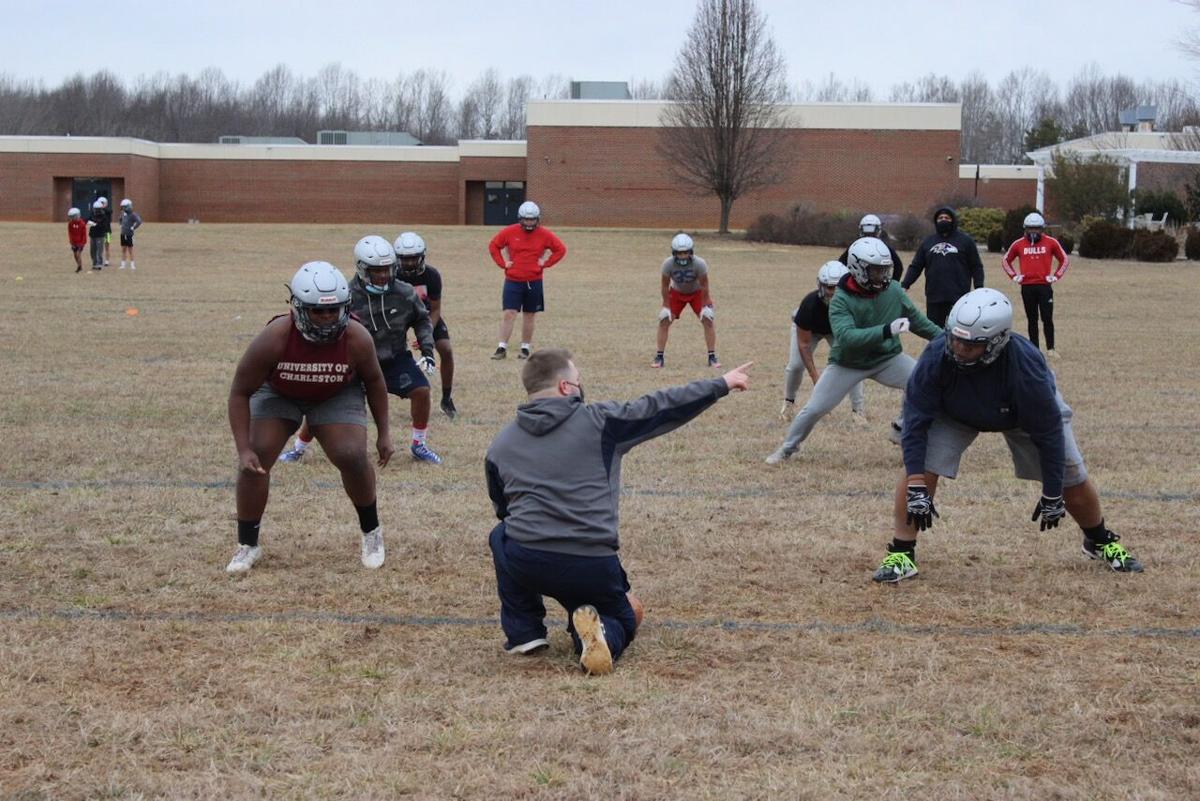 The excitement Brandon Johnson sees in his 6-year-old and 3-year-old when they see their gifts on Christmas morning was the same excitement he felt on the first day of football practice this spring.

It had been 15 months since high school football teams had been on the field together in an official capacity. When that first day of practice came earlier this month, the excitement was too much to hold back.

“The first day I heard pads hit each other, I was like a kid on Christmas,” Johnson, the football coach at Bassett High School, said this week. “That’s exactly how I felt. It was a lot of excitement among all the coaches and the guys.”

He wasn’t alone in that joy.

“It is exciting,” Magna Vista Coach Joe Favero said. “I tell everybody, if you want to see a bunch of excited, happy kids, being at football practice right now is just a place where kids are excited, they’re happy to be there, happy to be together and getting the chance to play.”

Said Patrick County High School Coach David Morrison: “The mood has been really good. The kids are upbeat. Coaches are too. It’s been awesome just to get back out to the game we love. For the kids that’s playing football, and for us that’s coaching. We’ve really just been able to embrace getting back together and getting after it, so it’s been really good.”

And now come the games, which won’t necessarily be on Friday nights and with the full stands and resounding bands and cheerleaders that are part of the football tradition. But then it’s nearly spring, too.

High schools in Virginia will play a spring season after facing delays because of the coronavirus pandemic.

Since the fall, the only way teams at Bassett, Magna Vista and Patrick County could get together was for out-of-season workouts, which mostly consisted of weightlifting and conditioning, with social distancing and attendance restrictions in place.

Now, with the Virginia High School League allowing for full football practices to begin on Feb. 4 and games to be played starting this week, coaches at all three local schools said they still have a few minor restrictions in place.

For instance, Johnson said his team still wears masks and gloves at practice. But other than that, they’re “full-steam ahead playing football,” he said.

Even though teams were able to get together and workout unofficially some over the last several month, Johnson still said it has been a difficult time, not just for the safety protocols in place for football but also for everything else high school athletes are having to deal with—mostly online classes, which Henry County schools have been doing for all but three weeks this school year.

“One thing was just trying to work our way around the virtual learning and the grades and the guys that were struggling with that,” Johnson said. “That’s kind of been our biggest hiccup. Guys losing interest because they’re sitting at home for a long time, and guys working jobs and not wanting to do any sports right now. Not really taking an interest in the classroom as they once did when I could see them in the building.”

Johnson said he and his players have those conversations daily about the importance of doing well in the classroom, even if the classroom is also their home.

“That’s probably been the toughest thing is just getting that feel back together. A lot of our core is still intact, but the biggest obstacle has been the virutal learning and getting them to understand and be successful in a virtual learning setting,” he said.

All three coaches said they saw players come to practice last Monday a bit out of shape, which they all admitted was to be expected — “I’m not in the best shape I’ve ever been due to the quarantine,” Johnson said with a laugh — and even though the offseason was extended, it still felt like a shorter offseason because teams weren’t able to do what they normally do in their time off.

“Some of the kids did a great job of staying in shape, but we definitely had some kids that took some time off. Just getting them back and moving in physical shape was Step 1,” Favero said. “There’s definitely been a learning curve that there hasn’t been in the past couple years.”

Said Morrison of the offseason: “It was pretty difficult. ... We didn’t get to do anything close to what we would ordinarily. I’m sure everybody has had to deal with it in their own way. It was very difficult to get anything done and on top of that you had the holiday and throw in quarantines and stuff like that and everything getting shut down and you can’t meet with your kids. It really, really put a damper on trying to get anything accomplished.”

Morrison said the goal of the first couple weeks of practice simply was knocking the rust off. It took a while to clean up basic football fundamentals that player had lost with so much time out of their pads and helmets, but he said he has seen they’ve shown a lot of progress in a short amount of time.

With progress comes satisfaction for the players, which brings even more excitement to the practices.

“We’re a long way off from where we’d like to be, but we’re headed in the right direction.”

Cara Cooper is the sports editor for the Martinsville Bulletin. She can be reached at cara.cooper@martinsvillebulletin.com

A look at local high school football games this weekend.

Bassett football coach Brandon Johnson, shown here at a practice in 2019, said he was like a kid on Christmas morning the first time his team was able to practice this spring after 15 months off.