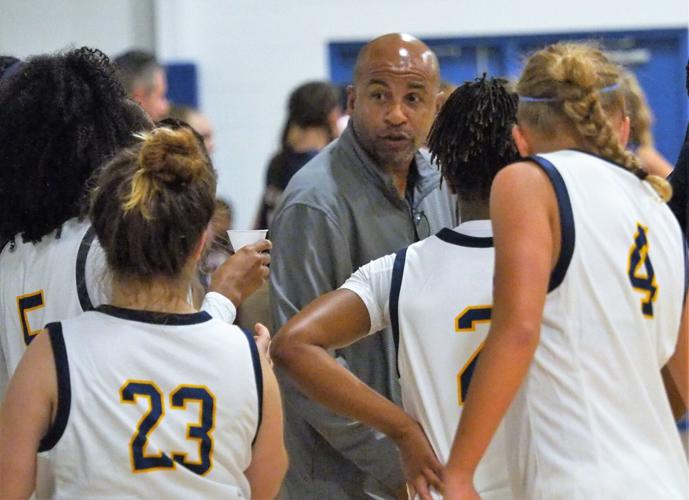 Carlisle girls basketball coach Jason Niblett (center) talks with his team in a huddle during a game earlier this season. 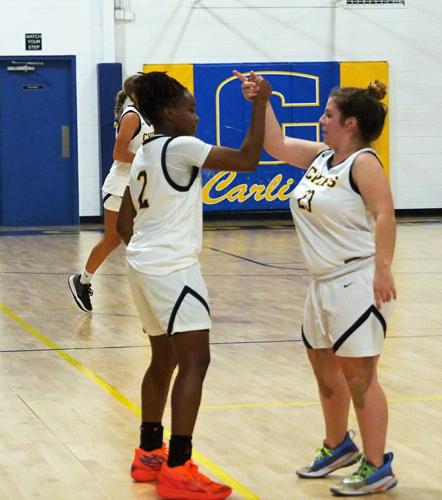 The Carlisle School girls basketball team opened the season on November 11 with a 54-50 win over Surry Home School.

The win was impressive to Chiefs coach Jason Niblett for several reasons. For one, Niblett’s squad had only been practicing to that point for about a week.

“We actually haven’t been able to practice much at all because of the new flooring being installed,” Niblett said following the win. “We just got the flooring completed last Saturday, so we’ve had just a couple days of practice. So we’ve just got to get into the laboratory and continue to work at it, but I’m proud of my girls. Several of my girls played during the summer, so they’ve got a lot of games under their belts during the summer by playing travel ball, and that helped us a lot for this coming season.

“We’ve just got to continue to get in shape and get our legs… We struggled shooting tonight. A lot of it had to do with not being in shape. We’re not in shape. To knock down those type of shots we have to have our legs underneath of us.”

Niblett is in his second season coaching the Lady Chiefs. He previously spent five years coaching the Carlisle boys basketball team, leading them to a state title in 2014.

Another reason the second-year coach was impressed by his team’s early win was all but two players on Carlisle’s roster this season are freshmen. The other players are a senior and an eighth grader.

Niblett spoke with the Bulletin about his young team this season.

Martinsville Bulletin: Against Surry, your team seemed to find success on the defensive end. How big of a focus is that for you all?

Niblett: We’re going to have to apply pressure and get steals because we’re small, undersized. We try to get steals and get easy baskets. We’ve just got to continue to get in shape, and that’s going to help with better defense down the stretch.

Can you tell me about your team this season?

Niblett: We have a young lady by the name of Zarah Gray, she’s a freshman. She’s very athletic, makes a lot happen on the defensive end with getting steals and so forth, and then getting us in transition.

Zion Squires, she’s a freshman. She’s very quick. We’re going to use her quickness to try to get turnovers, and she’s very skilled as far as getting to the basket and making layups, and so forth and she can knock down the open shot as well.

Gabrielle Fountain, she’s our center. She’s more of our bruiser, but she can finish around the bucket.

Maxie Garrett, her best basketball is ahead of her. She’s pretty athletic and does a lot of good things defensively, and can knock down the open shot if left alone.

Ja’La Niblett, she can shoot the 3-ball really well. She’s our leader. She was our leading scorer from last year. She averaged 14.9 points per game last year as an eighth grader on varsity.

Deamber Harris, she’s a freshman as well. She just started practicing in the last two days because her foot has been in a boot from soccer, I think it was.

Emily Cahill, she’s our lone senior. She’s just a ball of fire. We just enjoy having her.

Then we have two newcomers. Peyton Brightwell, she’s learning the game and she’s only going to get better, and we expect to see her on the floor real soon.

And then we have an eighth grader, Eleanor Favero. She’s in the laboratory just trying to get better.

What are you most excited about this season?

Niblett: I’m really excited about this group. I’m really excited to have a group of ninth graders going against upperclassmen and holding their own, with very few practices. The team we just played, they were 21-7 last year. I think they only lost one player. I’m sure they’ve been practicing. They’ve already played a game. We’ve been in the gym three or four days, so I’m excited.

Basketball scores from around the area Friday night.

Both the Patrick County girls and boys basketball teams improved to 2-0 with wins on Thursday.

Tresita Holland returns for a second year as head coach of the Martinsville High School girls basketball team, and has three returning players…

Five players who have played at five World Cups

Carlisle girls basketball coach Jason Niblett (center) talks with his team in a huddle during a game earlier this season.