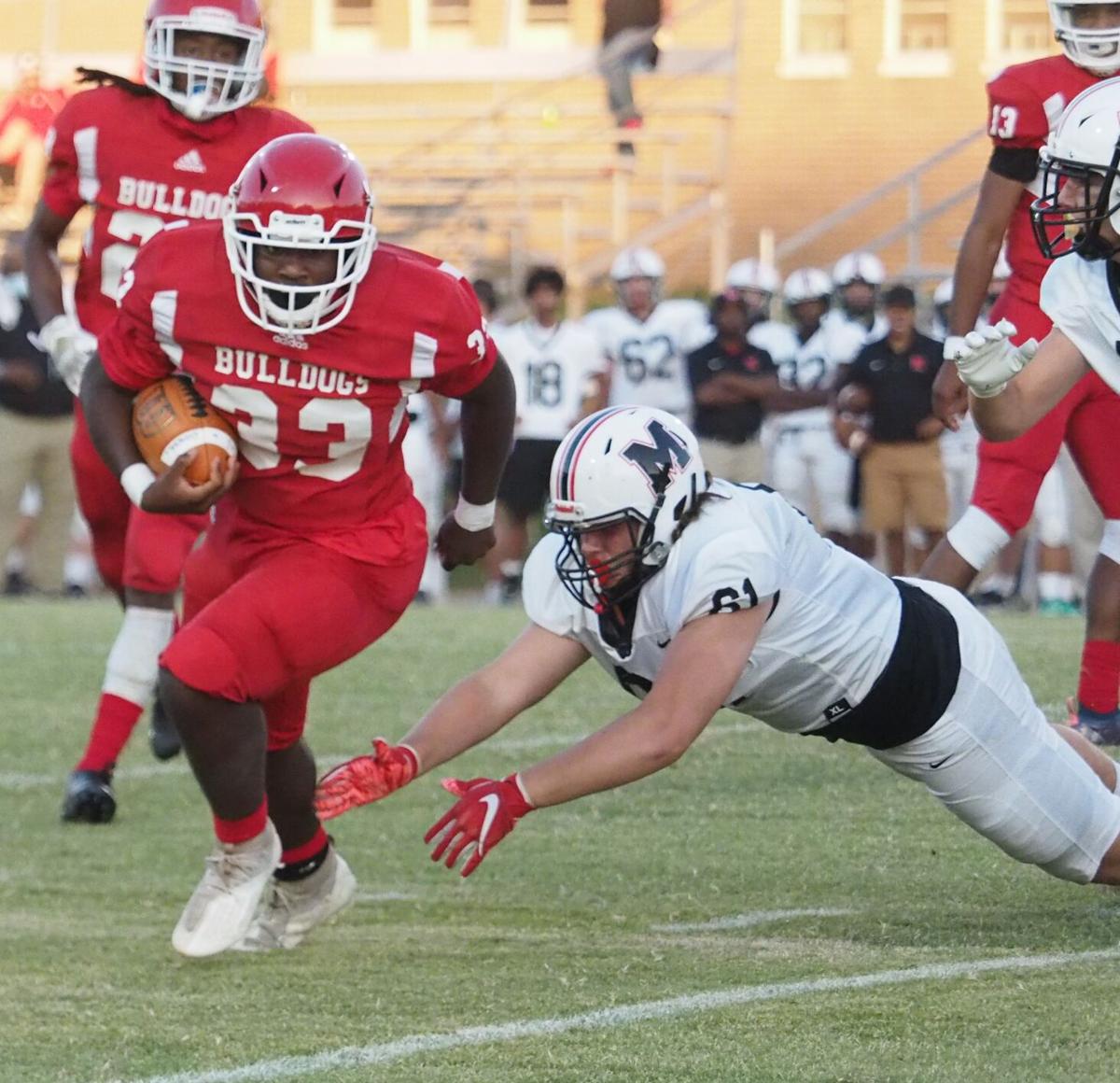 Martinsville’s Latrell Hairston (33) runs past a Morehead defender during a win over the Panthers earlier this season. The surging Bulldogs will take on Magna Vista at home Friday night. 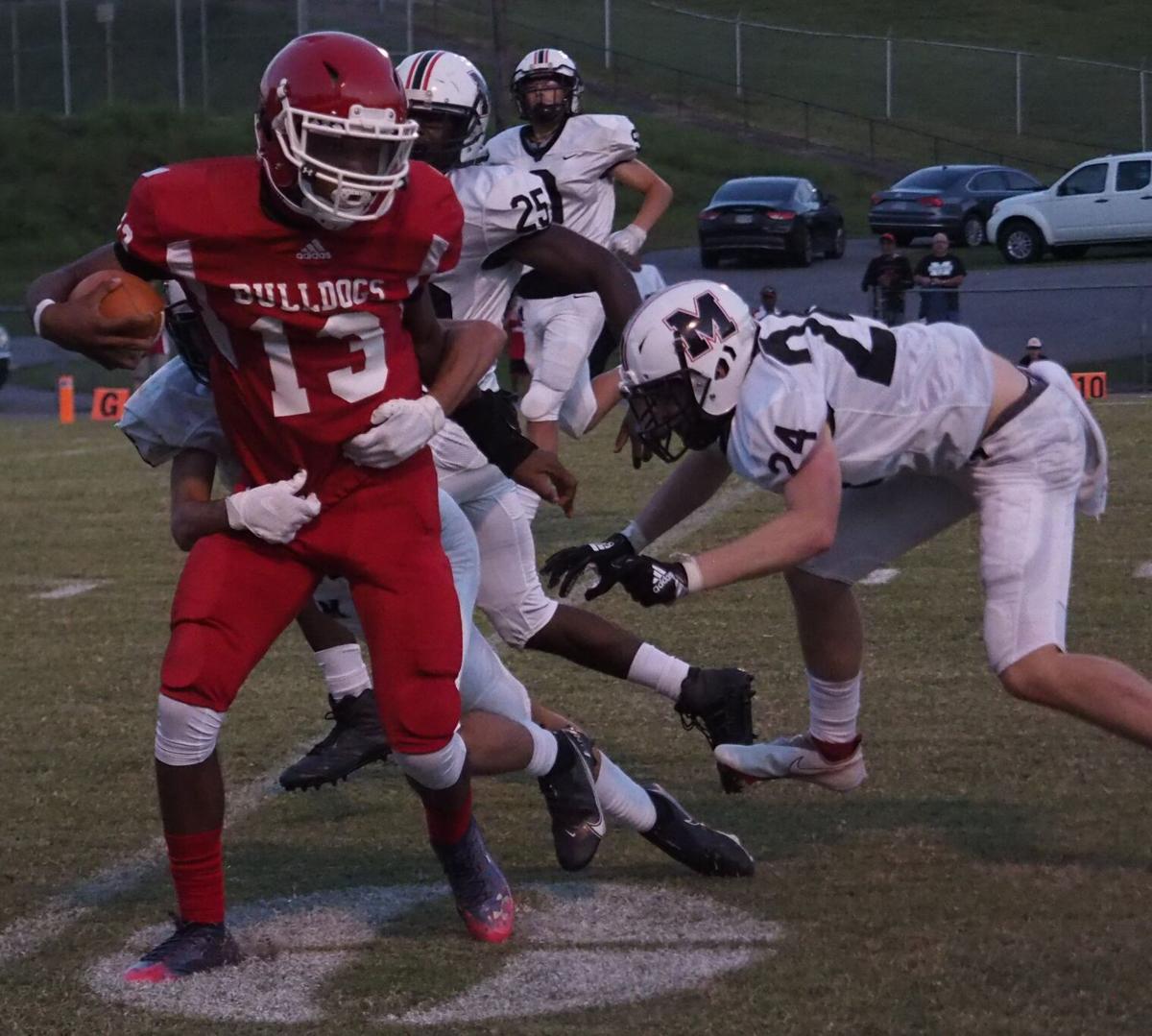 Martinsville quarterback Ray Dickerson (13) drags Morehead defenders as he runs towards the endzone during last Friday’s win over the Panthers. The Bulldogs will go on the road this week to face Dan River. 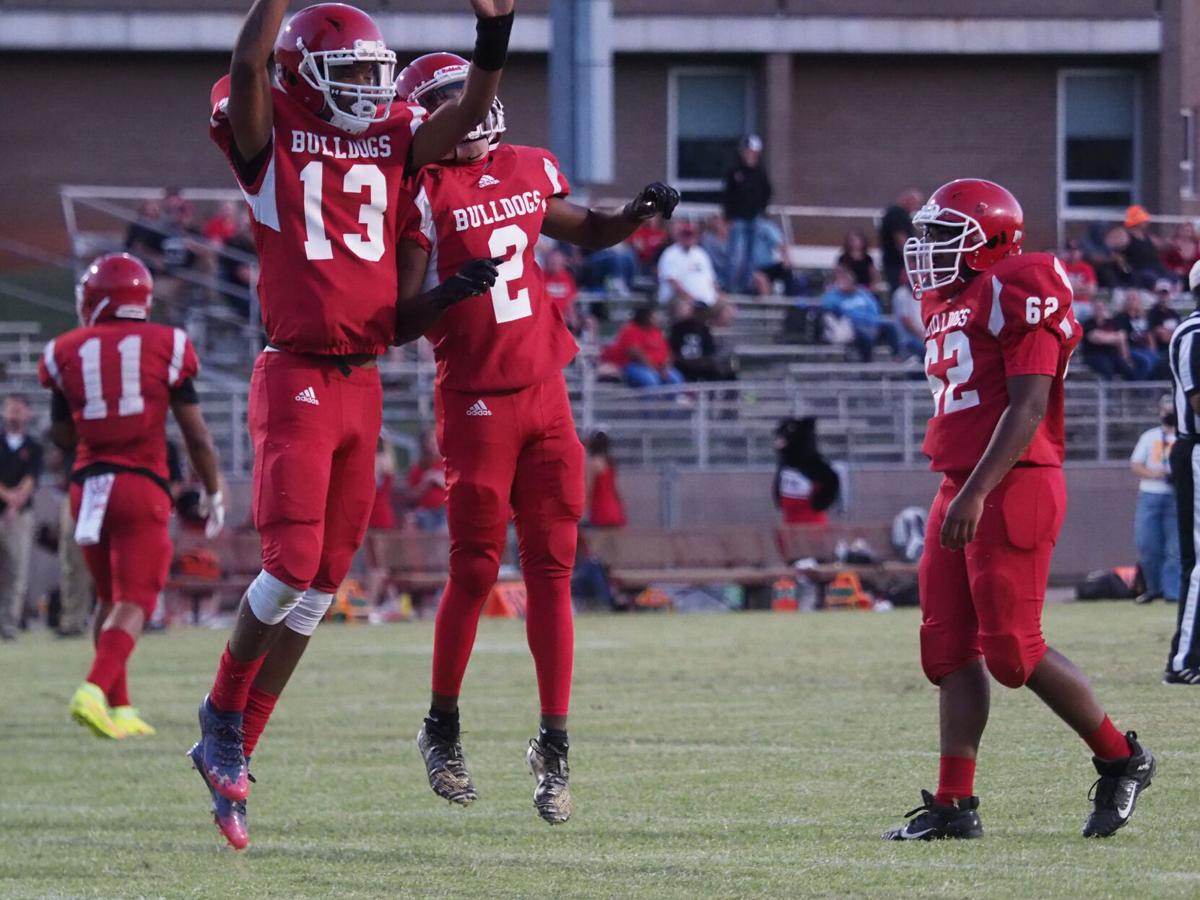 Martinsville’s Ray Dickerson (13) and Ronnie “Boots” Jackson (2) celebrate a touchdown in a game against Morehead earlier this season. The Bulldogs will travel to Chatham tonight for a mid-week non-district contest. 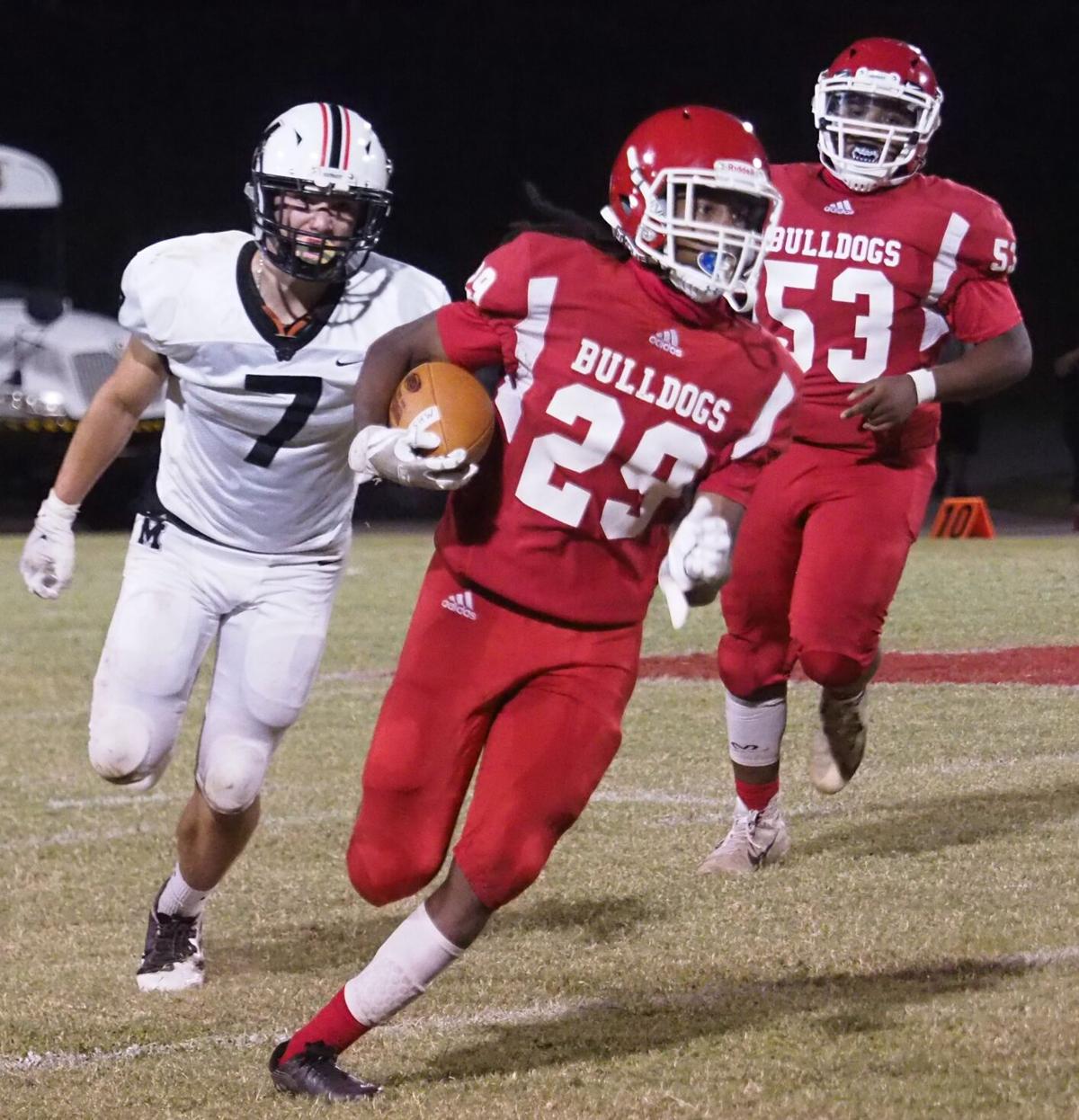 So when the final whistle blew on the team’s 34-18 victory over Morehead High School Friday, the extended celebration was warranted.

Martinsville went 0-10 in 2019, the first season under head coach Bobby Martin, and didn’t play in 2020 due to the coronavirus pandemic, meaning Friday’s win was not only the first in Martin’s tenure at the school, but the Bulldogs first victory since September 2018.

It was Martinsville's second game of the 2021 season.

“I’ve been coaching over 30 years. I’ve got a bunch of wins. I don’t even know how many I’ve got. That’s not important. What’s important is them. They need to feel what it’s like to win and learn how to win,” Martin said. “That’s what I’m excited about. I’m excited for them. They’ve put in all that hard work. Those 22 months of not playing and trying to get guys out and making phone calls, it’s been tough to get a win. If anything I’m more excited for them.”

It was apparent from the get-go Friday that the Bulldogs game plan was to beat Morehead in the run game, put together long drives, and control the clock.

They played that game plan to perfection.

On the very first drive, Martinsville went 76 yards in six plays, with runs of 32, 14, and 22 yards. The drive ended with a 1-yard touchdown run by quarterback Jaylon Long.

“It set the tone a lot,” quarterback Ray Dickerson said of the opening drive.

The Bulldogs longest drive of the night was a 12-play, 85-yard drive that sophomore Latrell Hairston finished with a 1-yard run to make the score 27-10 with 10 minutes to play.

Martinsville never punted in the contest. The only drives in which they didn’t score was a failed fourth down conversion attempt in the second and the end of the first and second halves.

“We had one of the best weeks of practice we’ve had since I’ve been here,” Martin said. “The guys just bought in. Even before the game the coaches were concerned because there wasn’t any noise. Nobody was making noise. And they just came out and played football. It wasn’t anything. They just played football. Played some of the best ball we have in a while.”

Dickerson had a 7-yard touchdown run early in the second quarter – the culmination of a 10-play, 80-yard drive – to make the score 14-3.

For as efficient as the Bulldogs offense was, the defense also came up with big plays to keep Morehead off the field. Martinsville had four sacks and three tackles for loss, and Tyheem Harrell had a fumble recovery.

Late in the fourth, after Morehead scored and converted the 2-point conversion to make the score 34-18, Martinsville fumbled the kickoff return, giving the Panthers possession at midfield with just over four minutes to play.

Martinsville’s Chavis Martin and Bryson Stokes halted Morehead’s momentum, though, coming up with two sacks, including one on fourth down, to give the Bulldogs possession and the ability to run out the clock for the win.

With a win on Tuesday to take the Piedmont District regular season title, the Bassett volleyball team feels they're peaking at the right time as they now begin postseason play.

G.W. held Bassett's offense to just one touchdown in a 21-7 win over the Bengals in Danville Friday night.

Bassett and G.W.-Danville are the top two football teams in the Piedmont District, not just in the standings but in virtually every statistical category. Here's a preview for the Bengals and Eagles game Friday in Danville, as well as a look at Halifax at Patrick County.

High School Volleyball: Magna Vista not dwelling on loss as they look toward the postseason

Even though the Magna Vista volleyball team finished the regular season with a loss, a strong year has the Warriors feeling confident as they now move to the playoffs.

Magna Vista opened the PD tournament with a straight-sets win over G.W.-Danville in Ridgeway Thursday night.

Comcast to give free tickets, fan experiences for Martinsville Speedway

With the second annual Xfinity 500 returning on October 31st at Martinsville Speedway, Xfinity is celebrating the weekend by offering a host o…

Martinsville’s Latrell Hairston (33) runs past a Morehead defender during a win over the Panthers earlier this season. The surging Bulldogs will take on Magna Vista at home Friday night.

Martinsville quarterback Ray Dickerson (13) drags Morehead defenders as he runs towards the endzone during last Friday’s win over the Panthers. The Bulldogs will go on the road this week to face Dan River.

Martinsville’s Ray Dickerson (13) and Ronnie “Boots” Jackson (2) celebrate a touchdown in a game against Morehead earlier this season. The Bulldogs will travel to Chatham tonight for a mid-week non-district contest.