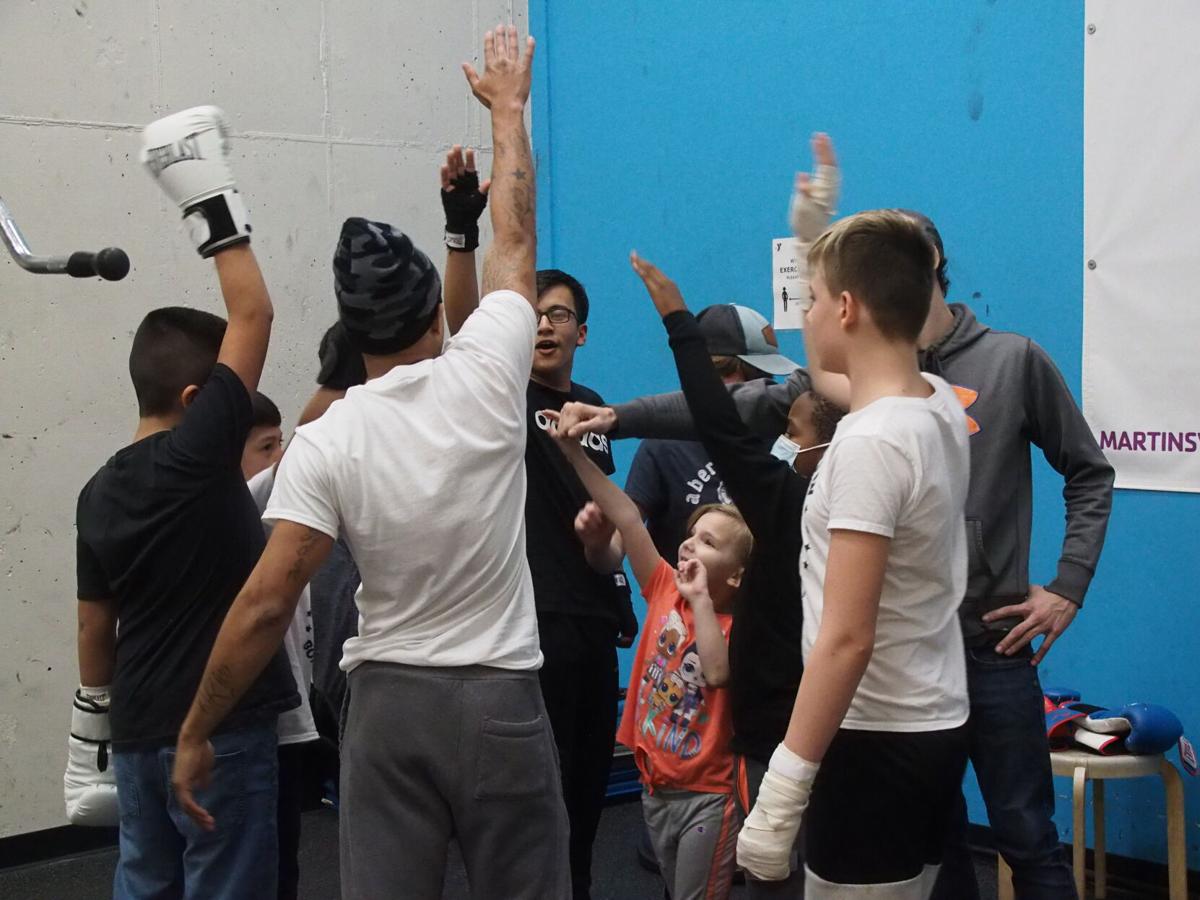 Ryan Venable and students of his boxing camp at the Martinsville YMCA celebrate at the end of class last week. 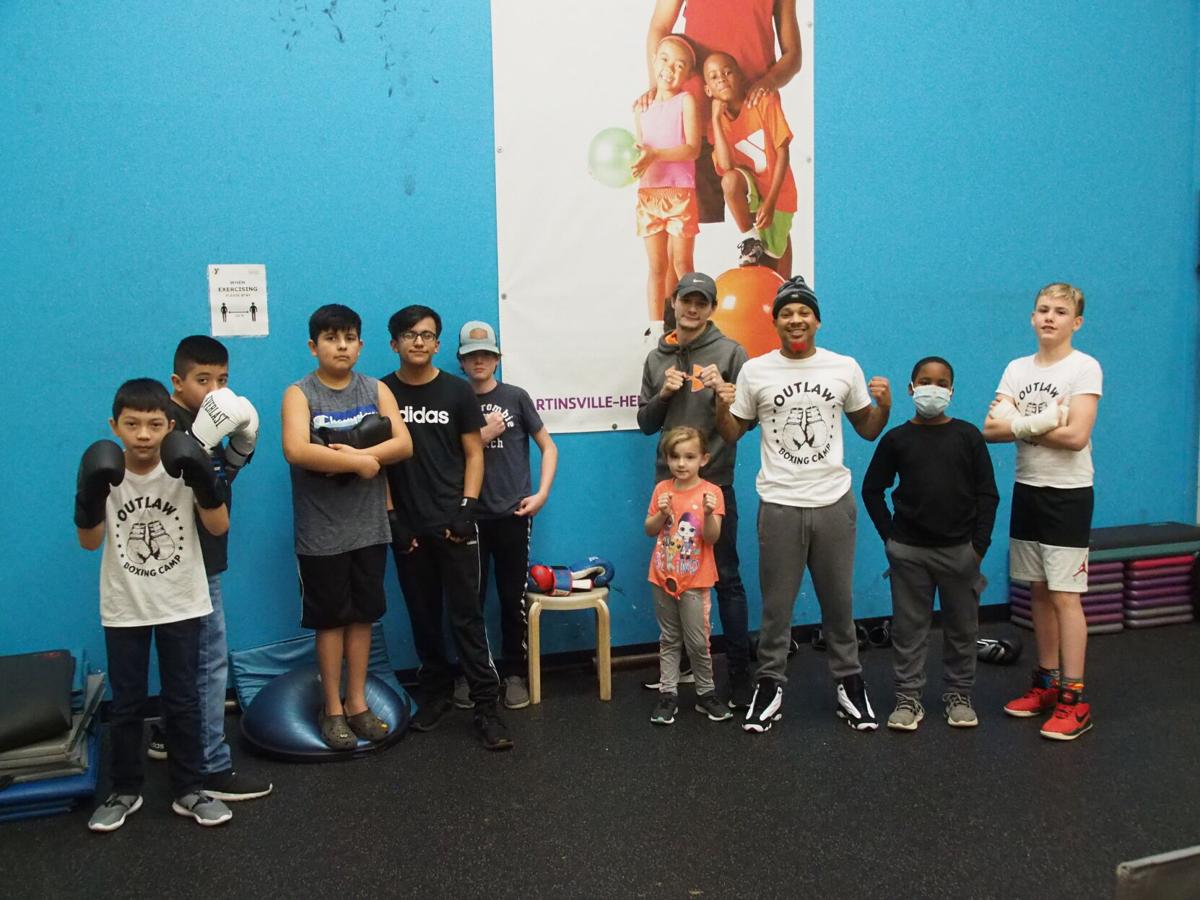 Ryan Venable (third from right) poses with his students after finishing a boxing camp last week at the Martinsville YMCA. 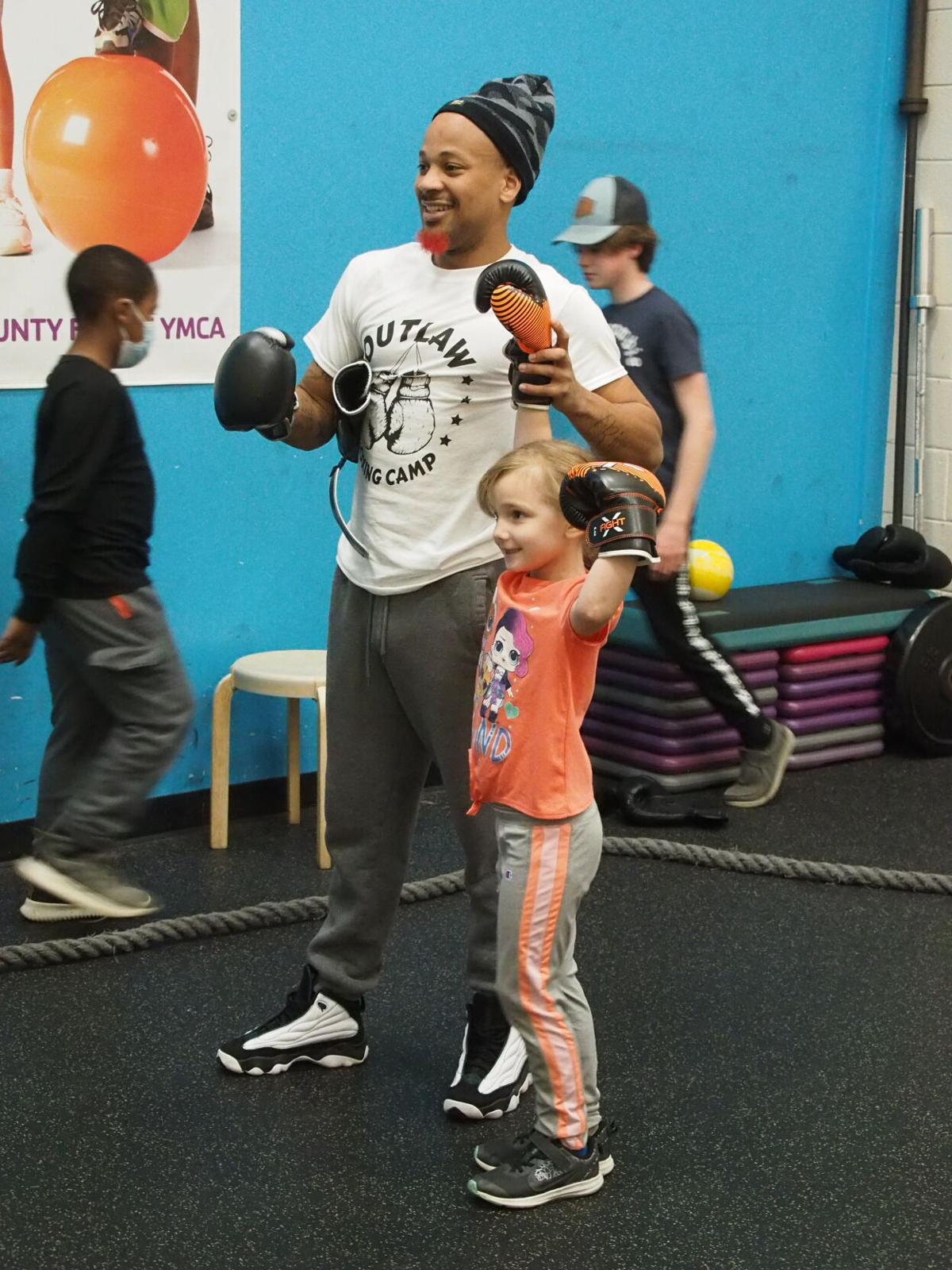 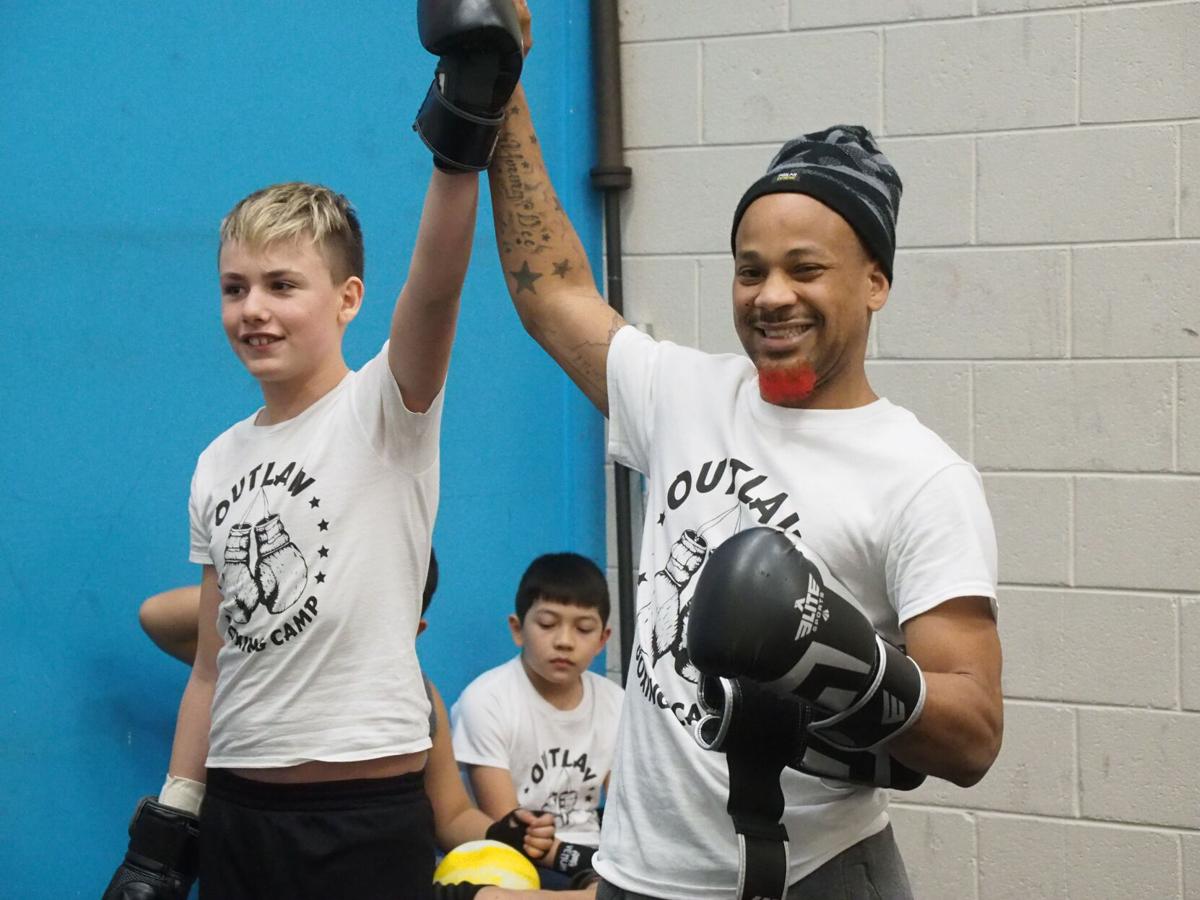 Magna Vista graduate Ryan Venable (right) celebrates with one of his boxing students at a camp Venable put on at the Martinsville YMCA last week. 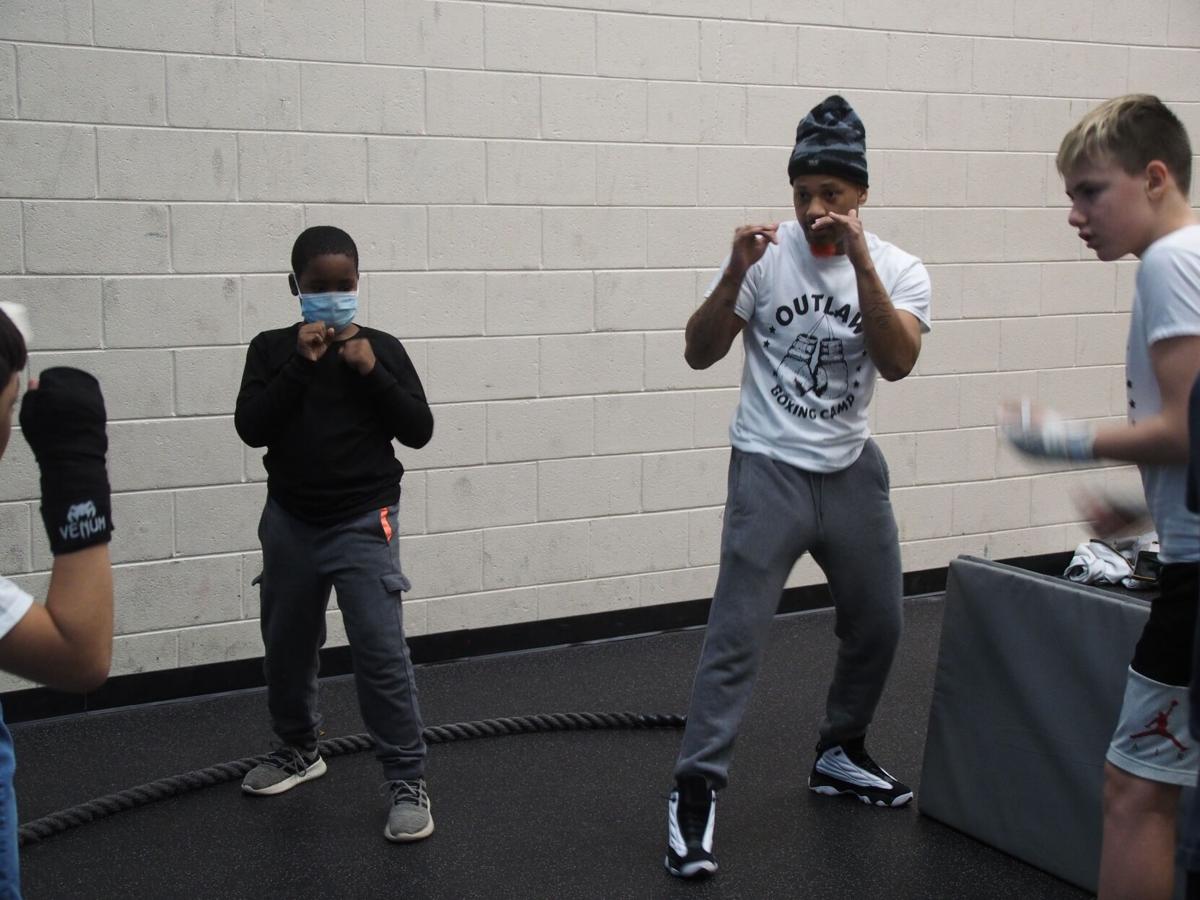 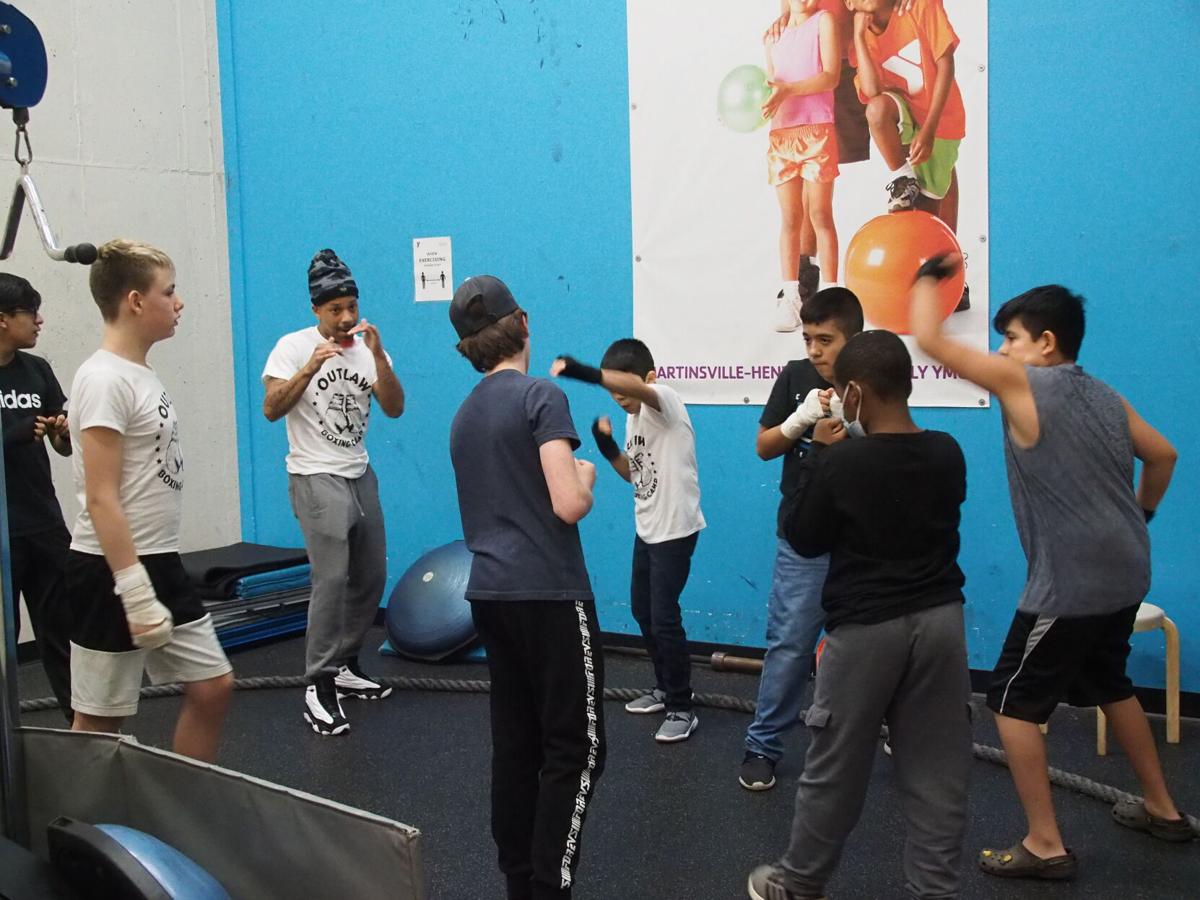 Boxing has taken Ryan Venable all over the country, but now the Bassett native is coming back home to teach the sport to young athletes in his hometown.

Venable, who goes by the name “The Outlaw” in the boxing ring, taught a four week boxing course for young novices at the Martinsville YMCA. The camp concluded last week with about 10 students in attendance.

Venable, a 2015 Magna Vista High School graduate, got his own start in boxing when he was 16 years old and his cousin was doing mixed martial arts.

“I started going and getting beat up a lot,” Venable said with a laugh. I was just doing it for fun.”

Two years later he started competing in the ring and doing exhibitions. By the time he was 22 he was starting to take the sport more seriously. That’s when he decided to make boxing his career as a professional in the sport, going after “the hardest fights I could get,” he said.

“I’ve been doing it seriously about two or three years,” Venable added. “Really enjoying it, loving it. It’s my full time job. That’s what pays my bills and how I’m able to feed my son and feed me.

He briefly trained in Florida, and now lives in Springfield, Massachusetts.

Venable credits moving around and training at a lot of different gyms with giving him the knowledge to now coach boxing. And when his fighting days are done, he wants to teach the sport in the place where he first learned. Because Venable has seen that boxing is inconsistent in Martinsville, despite seeing from others it’s a sport people in town enjoy and want to see more of.

“They want it to be consistent, because that’s how I felt,” he said. “You go to gyms and you see your friends there and they’re sparing people and they’re not there the next week. They’re there this day but not this day. So I just wanted to be bring some consistency to Martinsville, to my hometown, and give back and show the kids it’s more than iPads, it’s more than cell phones and stuff like that.”

Boxing was about more than just competition to Venable. It was a way for him to release any kind of anger, any kind of stress he was feeling, “because your mind is only focused on one thing,” he said.

He’s seen the same struggles from his young family members. Helping show the mental benefits of boxing is another reason he wants to coach the next generation.

“I’ve got nephews, I have a son, I’ve got nieces, and I just see that all the time. A lot of kids go through a lot in school now, school is different. They’re stressing, anxiety, depression. That’s one of the reasons why I started boxing too.”

Venable is hopeful his student learn more than just physical skills at his camps.

“I hope that they take sportsmanship. That’s why I had them touch gloves,” he said. “Communication, focus, discipline. They come tell me their problems with school and I can give them advice on that. That’s one good thing about teaching kids is you’ve been there, you’ve done that, you know it all.

“So I’m looking for them to learn more than just boxing. How to treat others, how to help others, and that’s what I want to be involved in…. helping each other, loving each other, respecting each other. That’s the main thing, respect.”

Venable is still boxing, having recently signed a 3-fight deal with MarvNation Promotions. He most recently fought in California last weekend.

Knowing that he caught the eye of fight promoters is as “blessing,” Venable said, especially when that means he gets the chance to box all over North America.

Getting to share the results of his fights with his students is even more motivation to train harder, but Venable is also motivated by the improvements he sees in his students. He admits he had never done any coaching before the first day of camp, and tried writing out plans for the first night.

His nerves were apparent.

It didn’t take long, though, for the students’ excitement to shine through, which took all the nerves away for Venable.

“The first day I saw that excitement and I was like, ‘Wow, you know what, I’m just going to wing it from here on out,’” he said. “And I started to see them learn… Day 1 they didn’t know anything. Day 2, Day 3, Day 4, by the last day I could see everything I taught them come into reality.

“Just to see that, it makes me proud. It makes me just want to keep working hard. They helped me out. They got me ready for my fight coming up mentally and physically. It lights a fire in me and it just makes me want to keep doing it.”

Venable plans to take the week of Thanksgiving off, then find a way to restart the camp somewhere again in December.

His dream is to one day open his own “Outlaw” gym, but for now Venable said he’s thankful to the YMCA for helping him get started in the world of coaching.

Even though Venable said 10 years ago he would have never imagined himself teaching boxing camps at the Martinsville YMCA, his hometown called him back, and he’s thankful for the opportunity.

“I probably pictured myself somewhere like no good. I was a trouble child. Fighting got me out of that,” he said. “So helping these kids and showing them there’s better things to do, because boxing isn’t just about punching a bag… To do anything to get the kids’ minds off of that and doing something that is productive and better, that’s something good. I’m super excited about it.

“Just to see that excitement from the kids and know that it’s something they want to pursue and continue to do, it’s a blessing… It’s awesome.”

Tom Brady talks about what he looks forward to in retirement

Cam Heyward apologizes after punching Justin Herbert in the stomach

Cam Heyward apologizes after punching Justin Herbert in the stomach

World Cup 2022: Which teams qualify for the Qatar finals?

World Cup 2022: Which teams qualify for the Qatar finals?

Hanging With Miss Cooper: What I'm thankful for this year

It's Thanksgiving, and while that usually means food comas and football, it's also important to remember to sit back and reflect on all we have to be thankful thankful for.

High School Football Playoffs: Martinsville excited for another opportunity to go play, will travel to Glenvar on Friday

Glenvar's football team defeated Martinsville earlier this season, and while the Bulldogs know Glenvar has gotten better since then, they're confident they have too. The two teams will face off Friday in the playoffs.

Magna Vista's Penn excelling on the gridiron at Ferrum

Magna Vista graduate Tmahdae Penn has impressed as one of the top wide receivers on the Ferrum College football team this season.

After the Bassett volleyball team had its most successful season under coach Julie Firebaugh, the Bengals hope that success becomes the norm.

Ryan Venable and students of his boxing camp at the Martinsville YMCA celebrate at the end of class last week.

Ryan Venable (third from right) poses with his students after finishing a boxing camp last week at the Martinsville YMCA.

Magna Vista graduate Ryan Venable (right) celebrates with one of his boxing students at a camp Venable put on at the Martinsville YMCA last week.