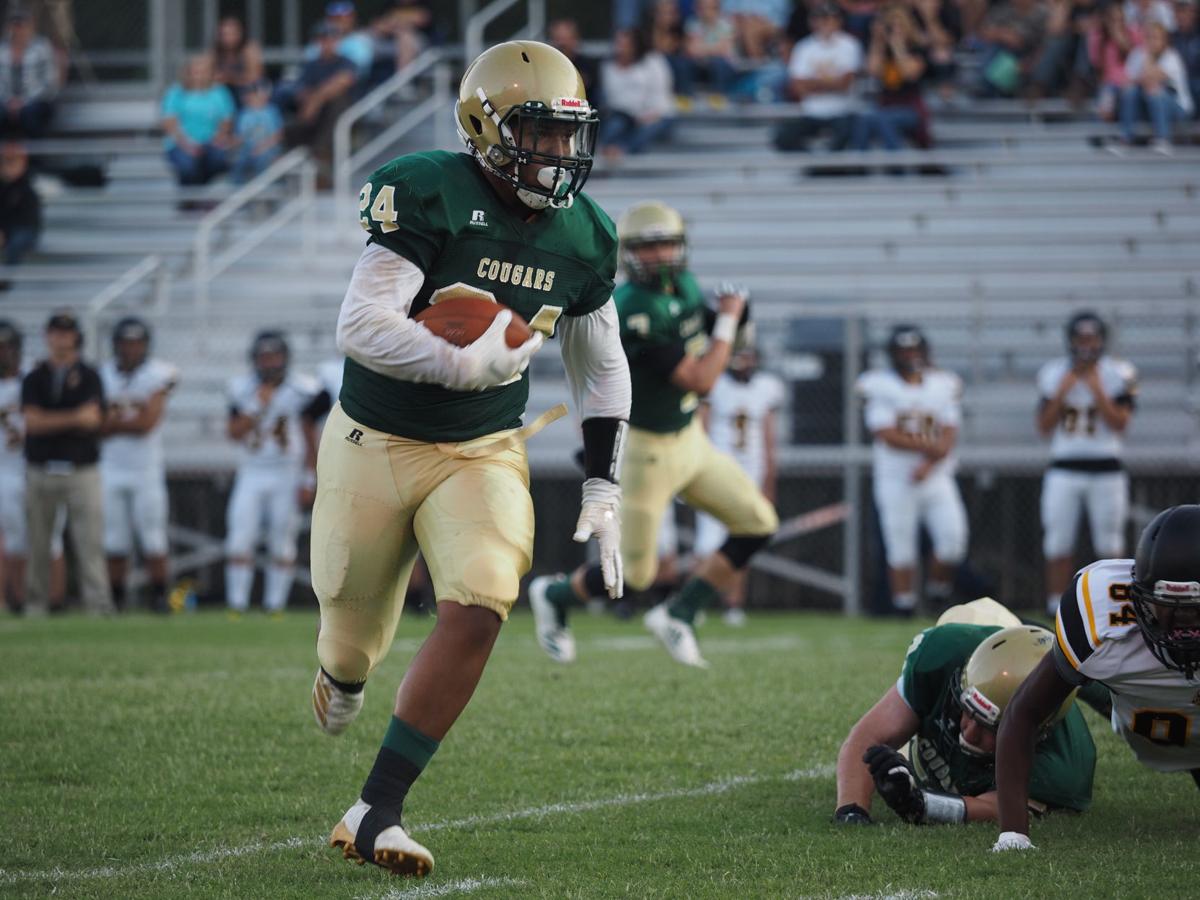 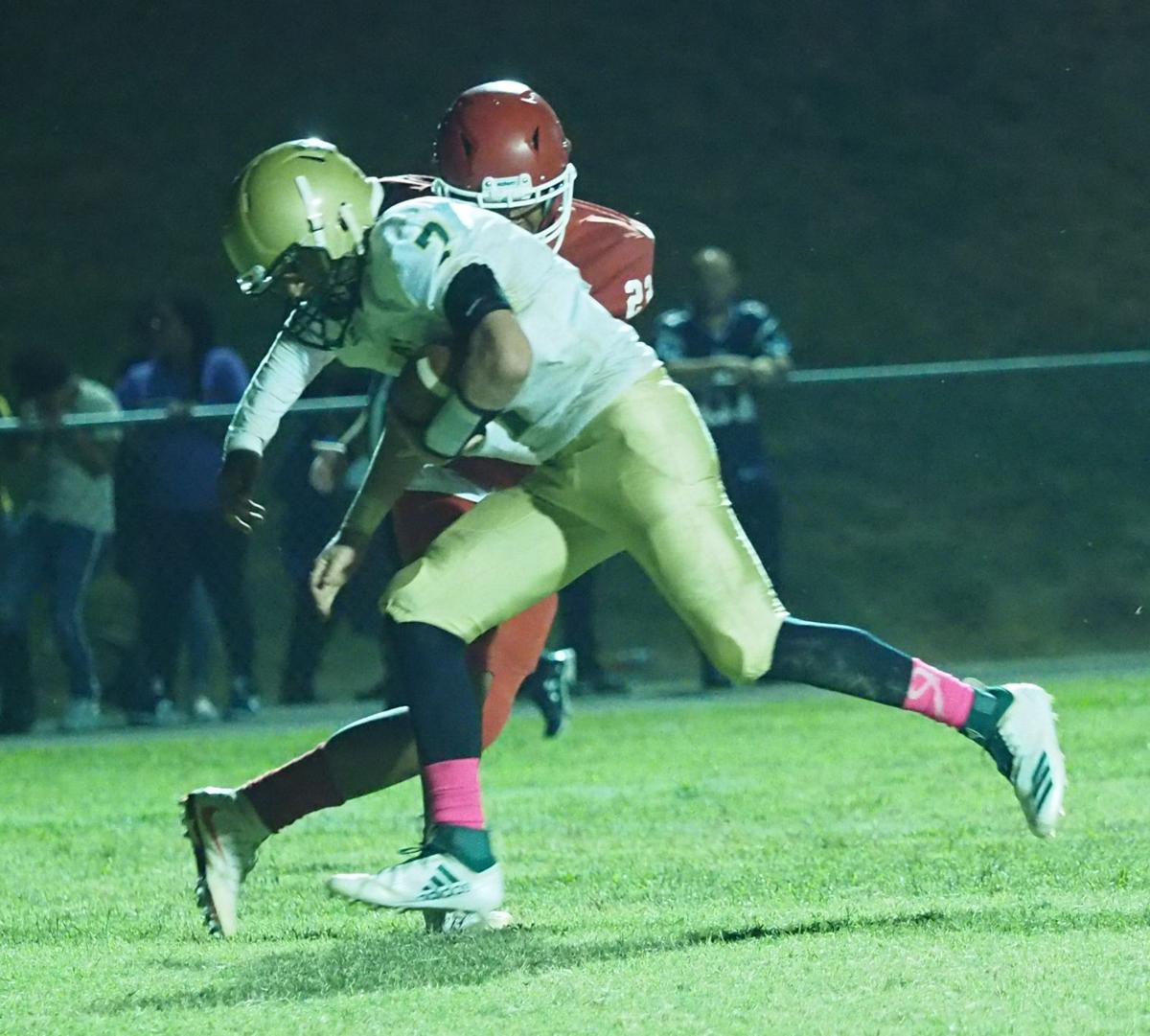 Patrick County quarterback Will Sprowl runs for a touchdown during a win over Martinsville last season.

Patrick County High School’s football team has 14 seniors on the roster this season, the most David Morrison has had since he took over as head coach of the Cougars four years ago.

Even though the Cougars lost a number of seniors who played key roles last season, filling the void has been made easier with a experienced group.

“They’ve really been a good group the past few weeks just coming in and getting prepared,” Morrison said of the seniors. “Really, they’ve been one of those groups where when we first started they bought into what we were trying to do and now hopefully we’ll be able to see the fruits of their labors.

“I guess the kind of unfortunate part is you’re always going to ask yourself what it would have looked like with a whole season with 14 seniors on the roster, but at the same time these guys have all been preparing themselves and I feel like they’re going to be ready for a fantastic year.

Here’s what Morrison had to say about his spring squad:

Offense“We’ve got (running back) DaeShawn (Penn) coming back, Carson Merriman is back, Will (Sprowl) is back. We replace a tight end with another senior who is going to slide into that role this year.

“Really we’ve got a good majority of our offense back. Right now it’s just getting the guys reps and making sure we’ve got all the pieces in the right places. I feel like we should definitely be able to move the ball, if not on the ground then when we throw it. We’ve got guys out there who can catch.

“Will (Sprowl), he’s back for another year at quarterback, so he definitely knows the system well. He’s a guy that you love to have there. He knows how to make the reads, he’s a smart kid. We’re blessed to have all of those guys back.

Defense“Defensively, last year we graduated two starting linebackers. We graduated a starting corner, graduated a D-lineman. So we’re really putting some people out there this year who mainly played in limited roles last year, but at the same time I feel like they’re definitely athletic enough to play the position. Right now it’s just about getting them ready, getting them some reps. Those live-speed reps are hard to duplicate in practice, especially with the weather being what it is.

“Defensively I feel like we’ve got a pretty strong unit out there, we’re just going to put our best unit on the field on defense and see what happens.”

“We’ve got Martin Morse back at kicker for us. He’s a senior this year. He’s been kicking for us for a while now. He’s got a great leg and it’s only gotten stronger. He’s picked up a step or two. He’s been running indoor track this year so we’ll see what he can do and see if that transfers over.

“We’ve got Josh Wright punting for us. He’s got a very strong leg.

“We’ve got our guys back there that have been doing the job for us and we just hope they get to knock the rust off for us as well and we get them back out here.”

The Cougars have a bit more time before they open the season. Game 1 is scheduled for March 5 at G.W.-Danville. With a late start due to the opener that was originally scheduled for Monday getting moved, PC will be forced to play more than one game in a week later in the season, if the schedule now stands.

How will that affect his team?

“Hopefully with that being more towards the middle to the last part of the season, by slotting that game in there we’ll be able to stay prepared and hopefully be able to game-plan in between games and give the kids enough rest in between by maybe going a little bit lighter on those days and taking a little while off and getting enough rest and time to recover.

“You just kind of adapt and change the way that you run your practice, so it shouldn’t be too difficult.”

Practice Makes Perfect: Bassett's Adam Martin making the most of his time in the pool this season

Season delays didn't stop Adam Martin from having the best swim meet of his career last week. Now, the Bassett High School senior is preparing to swim in the state championship next week, his final race as a Bengal.

HCPS announced its hybrid plans in email to families. The district also is allowing winter sports teams to play in postseason tournaments, which are scheduled to start next week.

Patrick County quarterback Will Sprowl runs for a touchdown during a win over Martinsville last season.