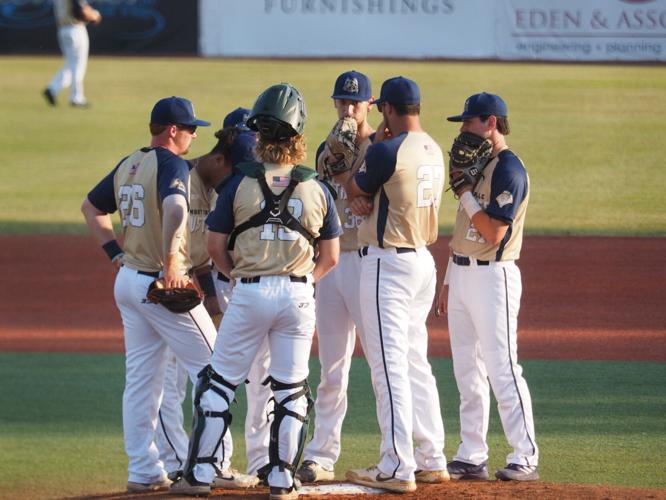 Martinsville Mustangs infielders huddle during a break in play during a recent game at Hooker Field. The Mustangs have won four straight games and six of their last 10. 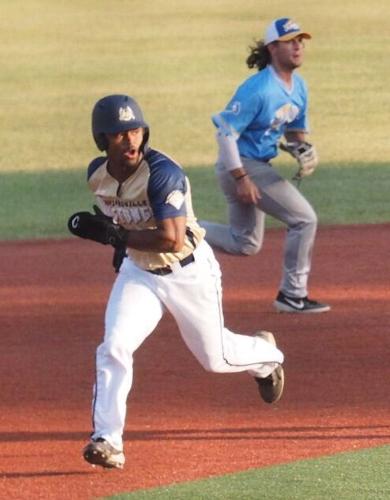 Martinsville Mustangs outfielder Christian Easley (above) hit for the cycle in a win over the Asheboro Zookeepers on Friday.

Baseball players from around the area have for the most part gone their separate ways as they find new teams to play for this summer.

Here’s a look at how some of those players are doing, an update on the Martinsville Mustangs, and a look at the week ahead.

Easley, a senior at the University of Maryland Baltimore County, is hitting .278 this summer with 10 hits and six RBIs.

Swails also helped his team with a grand slam in the fifth inning to tie the score at 6-6.

- Carlisle School 2022 graduate Connor Plaster hit two home runs and a double on Tuesday, finishing the night with four RBIs in his college summer debut with the Greensboro Monarchs to help the team to a win over the Carolina Disco Turkeys. Plaster is committed to play at UVA Wise this fall.

Geramita is joined on the Foothills roster by Patrick County’s Nash Thompson and Hunter Strole. Post 123 is 8-0 so far this summer.

Last Sunday, Slavens hit a walk-off single to help the Razorbacks to a 4-3 win over North Carolina in the Chapel Hill Super Regional. The win advanced Arkansas to the Men’s College World Series and eliminated the Tar Heels from the tournament.

Arkansas will open play in Omaha on Saturday against Stanford at 2 p.m. EST.

After struggling to start the season, the Martinsville Mustangs have won four straight games and six of their last 10 to improve to 7-7 in Coastal Plain League play this season, moving up to third in the CPL West standings.

Martinsville is hitting .229 as a team with 66 runs scored this summer.

Six Mustangs pitchers have an ERA under three. Cade Carlson (ETSU) leads the CPL with three wins on the mound, is fourth in the league with 19 strikeouts, and ninth with a 1.59 ERA.

Caleb McCroy (Duke) leads the league in strikeouts with 22. Cordarius Butler is tied for seventh with 17 Ks.

At the plate, Cameron Pittman (Radford) is fifth in the CPL, hitting .400 this summer.

- The Mustangs will play back-to-back home games on Thursday and Friday. They’ll face the Asheboro Zookeepers on Thursday for a CPL contest, and the Catawba Valley Stars on Friday. Both games are at 7 p.m.

They’ll return home on Monday to take on the Pilots, also at 7 p.m.

The team plays its home games at Finch Field in Thomasville, North Carolina.

On Wednesday, the Virginia High School League released the master football schedule for all high schools in the state. Full schedules for Bassett, Magna Vista, Martinsville, and Patrick County are all listed here.

Bassett's Jade Hylton named region player of the year; All other All-PD and all-region selections this spring

After an incredible season with the Bengals, Bassett senior Jade Hylton was named region and district player of the year this spring. PLUS, all other all-district and local all-region selections for baseball, softball, and soccer.

This Week in Mustangs Baseball: Martinsville continues to roll over 7-3 stretch

The Martinsville Mustangs continue to show improvement as they add more wins and move up the Coastal Plain League standings. Here’s a look at Mustangs this week.

The Cardinal Junior Golf Series returned for Week 3 on Monday with a tournament at Lynrock Golf Club in Eden, North Carolina. Results and updated standings through the first three weeks of play are listed here.

Nate Perry, a 2017 graduate of Bassett High School, was signed by the Tampa Bay Rays this offseason, and reported on Monday to the Rays Single-A affiliate, the Charleston RiverDogs.

After leading the Carlisle baseball team to the VISAA Division III state championship game for a second straight season, four members of the Chiefs took home state hardware for their play this spring.

For her prowess at the plate and on the mound for the Patrick County softball team this spring, senior Abigail Epperson was named First Team All-State for VHSL Class 2, the VHSL announced this week.

Patrick County Post 105 scored in each of the first five innings, and held off a late charge by Martinsville Post 42 for a 9-7 win in Junior Legion baseball action Friday in Stuart.

The Patrick & Henry Community College athletic program will add men's and women's tennis programs, with the teams slated to begin play this fall, the school announced this week.

U.S. swimmer rescued by coach after fainting at world championships

Martinsville Mustangs infielders huddle during a break in play during a recent game at Hooker Field. The Mustangs have won four straight games and six of their last 10.

Martinsville Mustangs outfielder Christian Easley (above) hit for the cycle in a win over the Asheboro Zookeepers on Friday.