Subscribe
Read Today's E-edition
Share This
When a hockey stick breaks, everyone has to lend a helping hand
0 Comments
Share this
Eduardo A. Encina, Tampa Bay Times

RALEIGH, N.C. — During the most critical moments of the Lightning’s second-round series opener against Carolina, defenseman Ryan McDonagh found himself in a tough situation.

In the final seconds of Tampa Bay’s 2-1 win at PNC Arena, the Hurricanes were pressuring the Lightning net with an extra attacker and McDonagh swung his stick in an attempt to clear the puck from in front of the crease.

In the middle of traffic, McDonagh’s stick broke, the blade snapping off and leaving him holding a useless shaft as the puck spun away. Then forward Barclay Goodrow, who was positioning in front of McDonagh in the slot, swung his right arm behind him and gave his teammate his left-shot stick.

Time ticked away as Goodrow could only use his body to screen the Hurricanes from getting an open look. With Carolina having the extra attacker, the game was ending in the Lightning zone, so Goodrow had no chance to sneak back to the bench to get a new stick.

The Lightning locked down the net late to seal the Game 1 win, but not without some nervous moments.

“When it happens to your opposition, you try to take advantage of it,” McDonagh said. “When it happens to you, your opponent’s going to try and take advantage of it, so it’s a part of the game. You play the percentages there as far as passing the stick down to a defenseman or whatnot, or a forward breaks and tries to get off the ice or get a new one. You’ve just got to handle the adversity in the right way.”

If it seems like more broken sticks have littered the ice during the postseason, it’s because they have. Lightning equipment manager Ray Thill, who has been with the team for 22 years, said the postseason brings a lot more intensity.

“It is hacking and whacking,” Thill said. “Guys are desperate, and it always happens in the playoffs. ... Guys are going down, they’re blocking shots. It’s the playoff mode.”

On the bench, sticks are lined up on a rack in numerical order. But Thill and his staff can recognize each player’s stick by the knob or the tape job as well, so when Steven Stamkos is in the faceoff circle, Thill has a spare at the ready.

“Power play, the same thing,” Thill said. “Guys on the power play, we have all their sticks ready in our hands. And penalty kill, the same thing, because the sticks, if they just get the tiniest nick, they’ll end up breaking. … During the game, it’s usually the guys screaming at me sometimes if I can’t see the play like if it’s down in the corner. They’ll scream, ‘Stick for 86,’ and I’m there for that.”

Players are particular about their sticks and their lifespans. Some will switch after a few games. Others, like center Brayden Point, will use the stick until it breaks. When they do snap, Thill will go into the dressing room to get an extra to add to the rack.

And sometimes players will just get a bad batch of sticks. Thill remembers one time several years ago when former coach John Tortorella fumed on the bench after watching defenseman Dan Boyle’s Easton two-piece stick break four times in a game.

“I remember Torts just absolutely yelling at me for the sticks,” Thill said. “I’m like, ‘I don’t know what you want me to do. I’m not making them.’ I think he even called the stick rep after the game.”

But players can’t always get to the bench and will have to rely on teammates.

In Game 2 of the Lightning’s series with Carolina, a contest in which five Tampa Bay sticks broke, defenseman Mikhail Sergachev’s snapped on the penalty kill after a puck battle against the boards behind the net. Forwards typically give up their sticks to defensemen, especially on the penalty kill if they shoot from the same side. Anthony Cirelli, left-handed like Sergachev, offered up his, then clogged shooting lanes higher up in the zone empty-handed.

“In that situation, we’d rather be having Sergy with a stick, playing down low in front of the net,” Cirelli said. “I think everyone’s kind of aware and we see it and just try to recognize which guys are more important with the sticks than without. In that situation there on the PK, Sergy definitely needs a stick and you can just try to take away the shooting lane by staying up top.”

Lightning coach Jon Cooper said players are coached up on how to think quickly when they can give their stick to a like-shot teammate who suddenly needs one.

“There’s a sense in players that they can really identify those situations when they happen,” Cooper said. “But I’ll tell you, if you’re the coach on the bench when that stick’s broken, it isn’t a great feeling when you’re sitting in the D zone. But it’s something that is a skill, it’s coached, it’s preached as to what happens in these situations and who goes where.

“But it’s never a comfortable feeling, that’s for sure.” 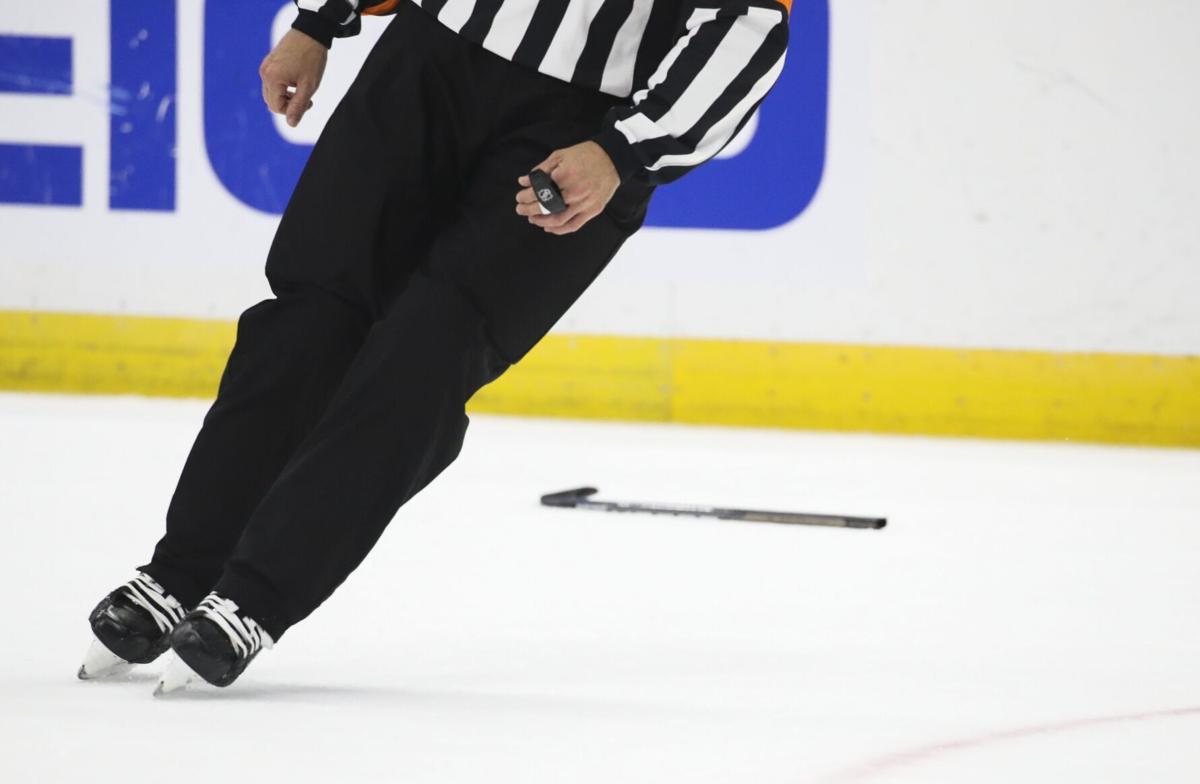 A broken stick remains on the ice as the Lightning take on the Hurricanes in Game 3. (Dirk Shadd/Tampa Bay Times/TNS) 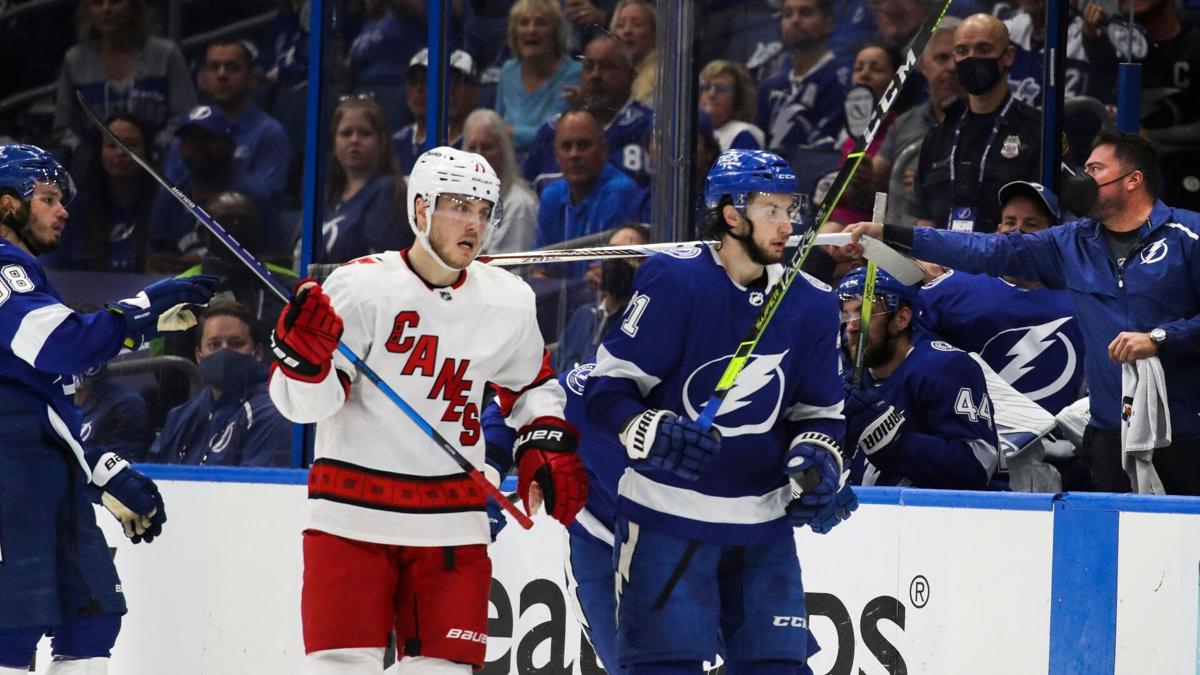 Lightning defenseman Mikhail Sergachev, in background on left, gets handed a stick after his broke while on the ice against the Hurricanes in the first period of Game 3 in Tampa. (Dirk Shadd/Tampa Bay Times/TNS)