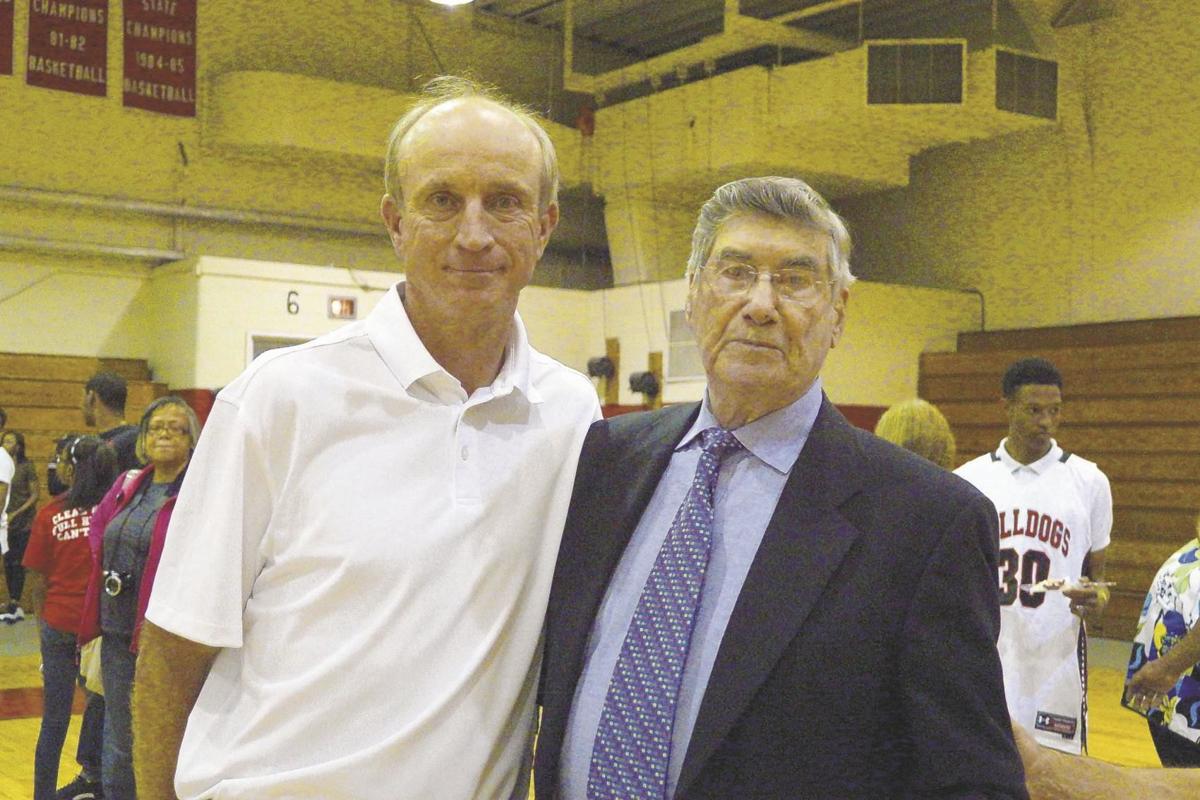 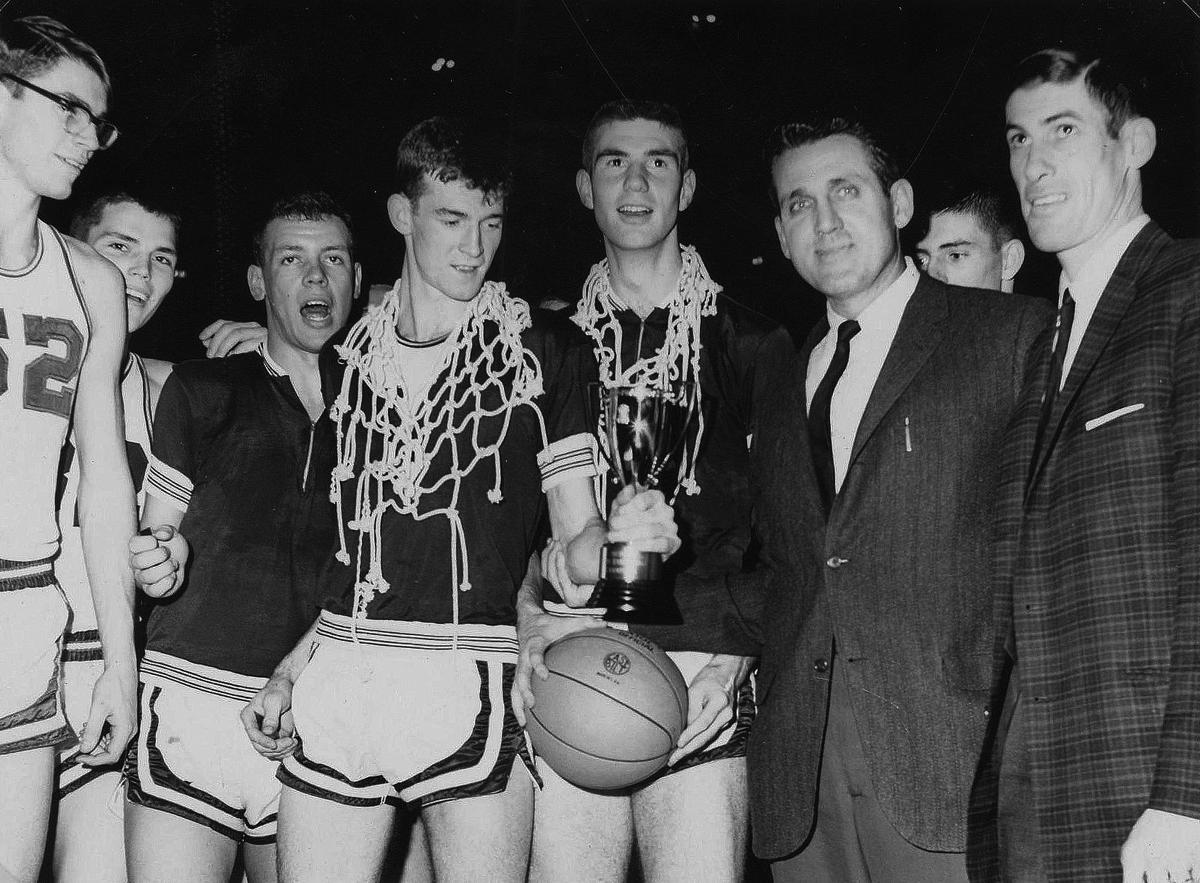 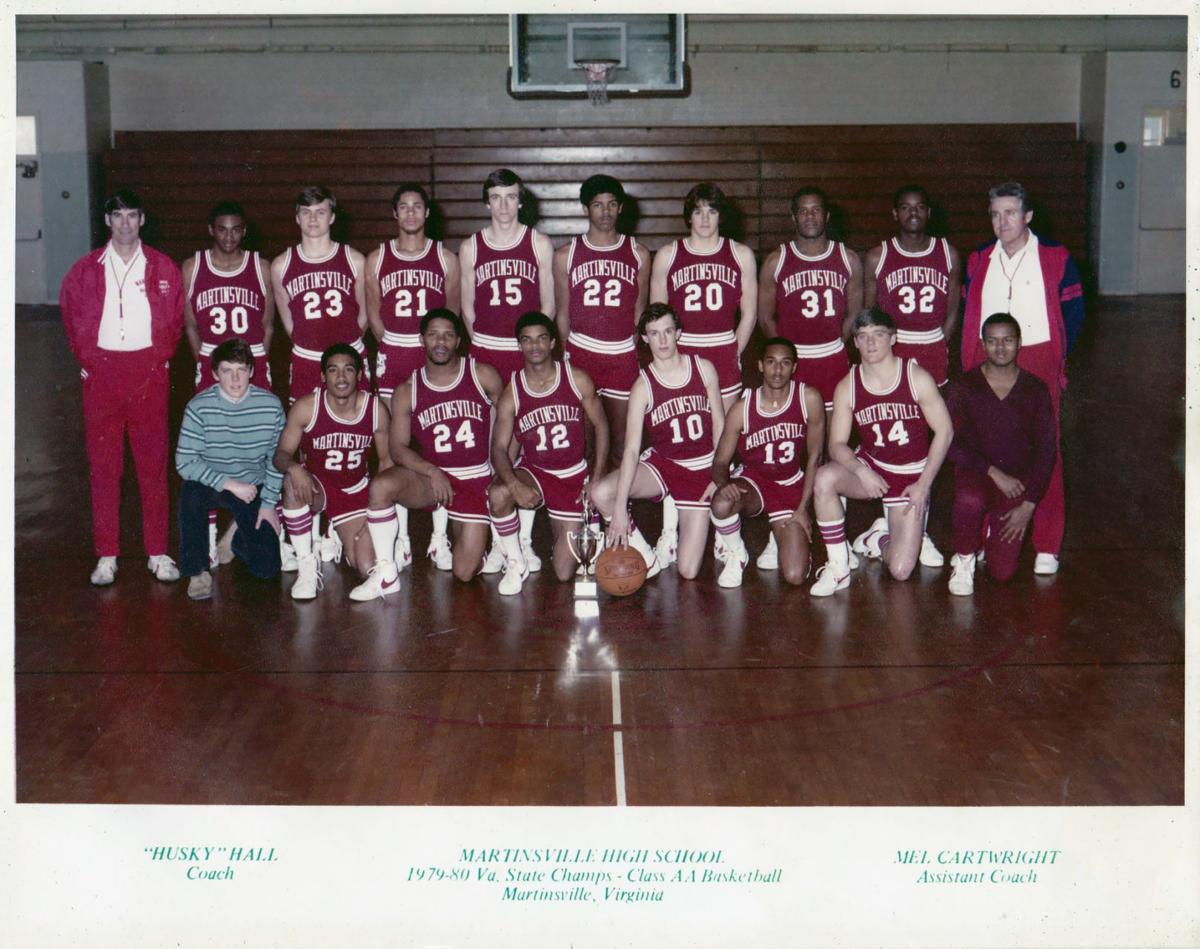 Husky Hall (back, far left) poses with the 1979-1980 Martinsville High School boys basketball team, one of seven teams to win a state championship under Hall as head coach. 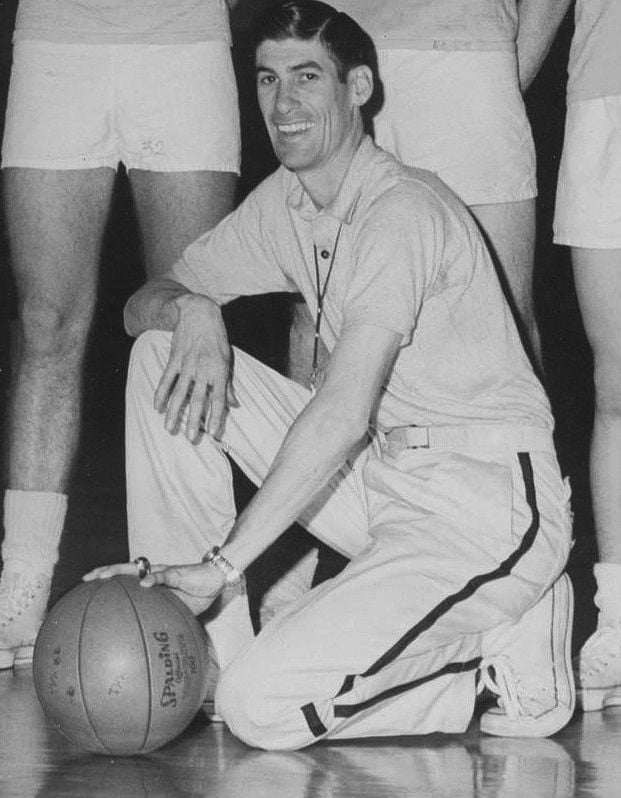 Martinsville High School’s boys basketball team has had just five head coaches in more than 60 years of the program.

The winningest of them all was Robert “Husky” Hall, a state record-holder at that.

After sharing coaching duties with Mel Cartwright for three seasons, Hall took over as the sole head coach of the Bulldogs in 1964, and over the next 31 years he recorded 605 victories and seven state championships. That victory total was a Virginia High School League record at the time Hall retired. The number of state titles remains a record for a single coach.

Hall passed away at his home in Martinsville on Sunday night. He was 91 years old.

Under Hall, the Bulldogs played in a VHSL-record eight consecutive state championship games from 1980-1986, winning all but three. He was inducted into the VHSL Hall of Fame in 1991.

Hall remained a legend in Martinsville even decades after he left the Bulldogs, and he was admired in the community both for what he accomplished on the basketball court, what he did for the school and the positive impact he had on hundreds of people’s lives, not just his players.

“It’s like an icon passing,” Golding said. “He and Coach Cartwright put Martinsville on the map as far as basketball goes. Not just in Martinsville but in the state.

"Everyone in the state, they know who Husky Hall is even to this day. You’ll go to basketball tournaments and basketball games throughout the state, and that’s one of the first things people will ask you is, ‘How’s Husky Hall doing?’”

Hall battled a long illness and had been bedridden for many months before his passing. Unfortunately his death comes while the nation is battling the coronavirus pandemic, and large public gatherings, like funerals and memorials services, which you would expect to celebrate such a career, aren’t permitted.

Hall’s daughter Terry Jamerson told the Roanoke Times Sunday night that there will be a family burial on Wednesday morning, and they will have a celebration of life once all of the coronavirus issues have passed.

“If you had something like that right now, half of Martinsville is liable to show up,” Golding said. “There’s no telling how many people he’s touched.

“There’s no bigger legacy for anyone in the state. He’s what everybody tries to be is to be like Coach Hall. … He’s unbelievable.”

Charlie Holland, who played for Hall for two state runner-up teams in 1983 and 1984, said he knew Hall as a disciplinarian on the court but also got to see the other side of him, too.

“He was one of the funniest people you ever wanted to meet,” Holland said. “All of a sudden you would think he was being serious, and then he would take off laughing. He was just that type of person. He had you scared out of your wits, and all of a sudden he’d start laughing. And he always had nicknames for everyone.

“He was very comical but knew the difference between business and play.”

Holland said what made Hall unique as a coach was his attention to detail and his preaching the fundamentals of the game. But beyond the court, Holland said Hall was adept in the ability to turn his teams into a family, something Holland himself tries to teach now as the coach of Martinsville’s girls basketball team.

“One of the things that I have to say about him, the guys that I played with … it was like a family environment,” Holland said. “That’s one of the things you learned. It was a privilege to wear that Bulldogs uniform.

“We just learned how to play with each other, and we always had each other’s back. The way it was back then, when you played for Martinsville, you always stuck together. Whether it was in school or you go out to eat, it was always that team camaraderie. And that’s one of the things I try to instill in my team.”

Even modern-day Bulldogs who never got to play for Hall know the legacy he carries. His plaque hangs in the hallway of the current Martinsville High School, and another is outside of the gym where the Bulldogs' varsity teams play their games.

Both Golding and Holland said, even if you didn’t like what Hall had to say, you always knew he commanded your respect.

“When he spoke, everybody stopped and listened. That’s the way he carried himself,” Golding said.

Said Holland: “For someone to maintain and coach as long as he did at that level, it signifies the way he lived his life. He lived to be 91, so that shows you how tough and how much of a fighter and a competitor that he was.

Husky Hall (back, far left) poses with the 1979-1980 Martinsville High School boys basketball team, one of seven teams to win a state championship under Hall as head coach.