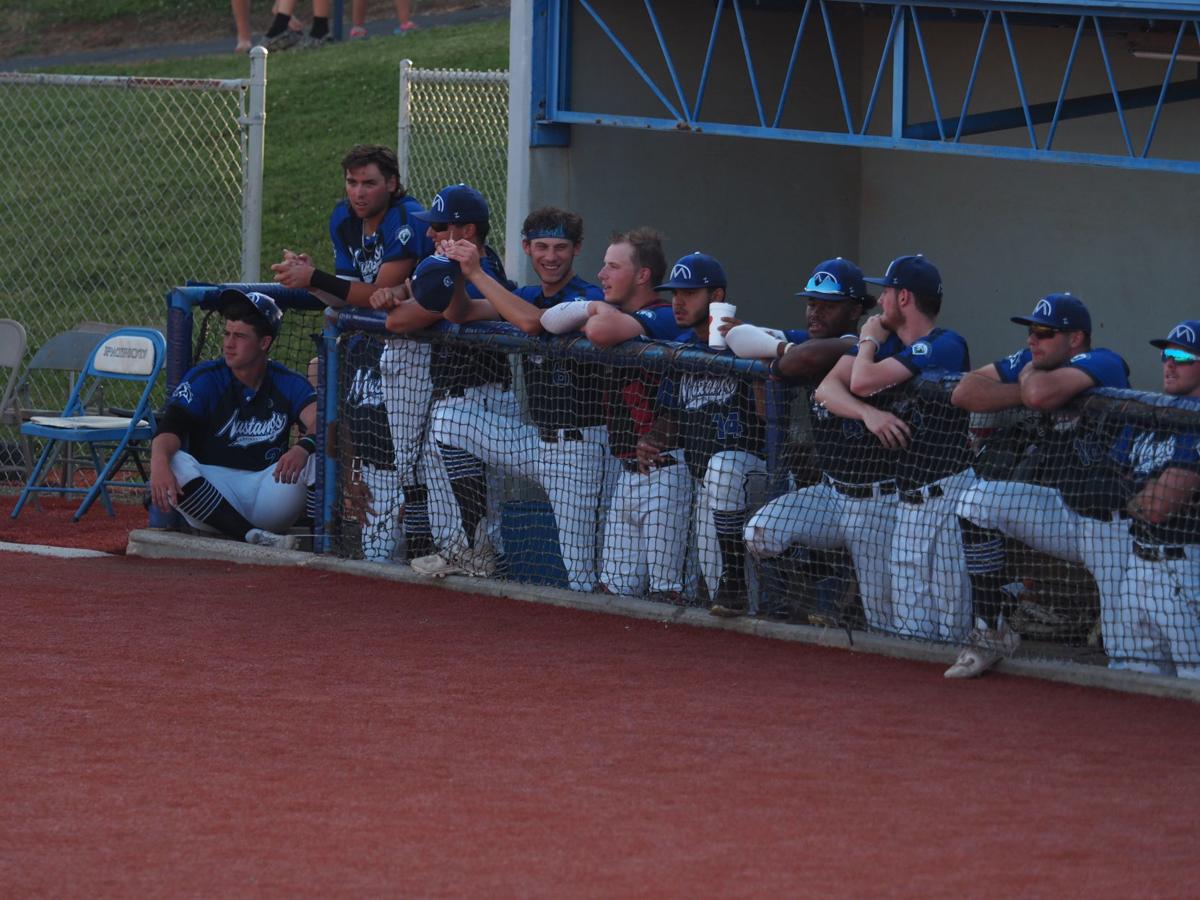 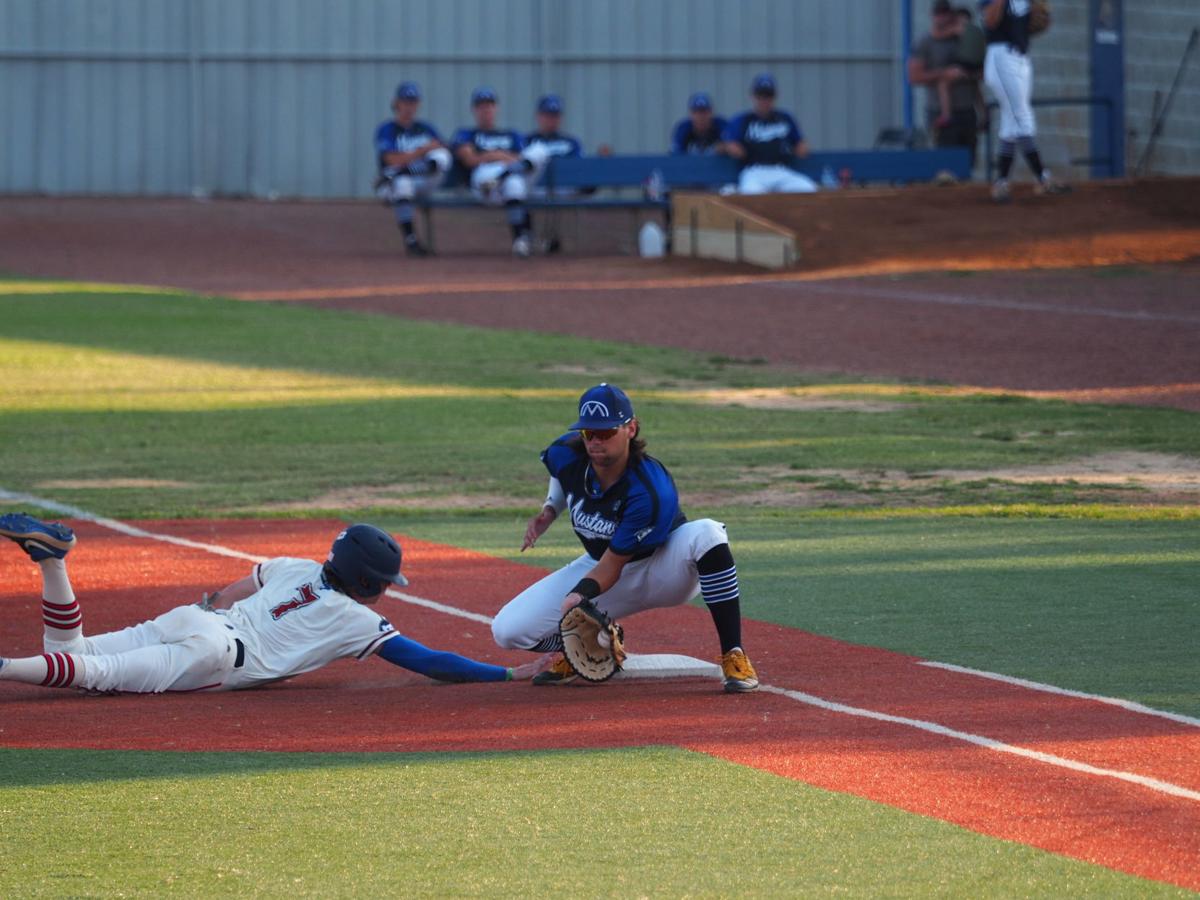 Mustangs first baseman Logan Fink attempts to tag out a runner during Friday's game against the HiToms at Hooker Field. 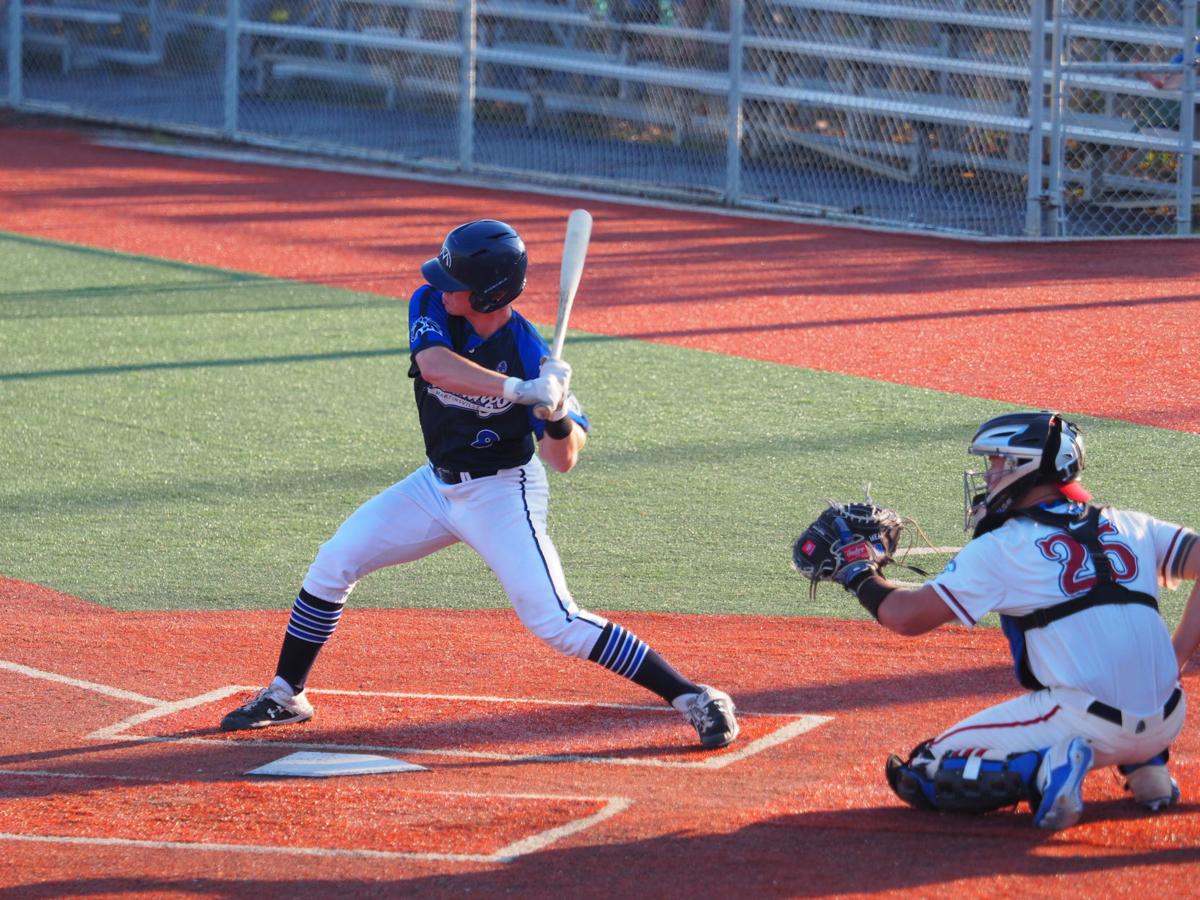 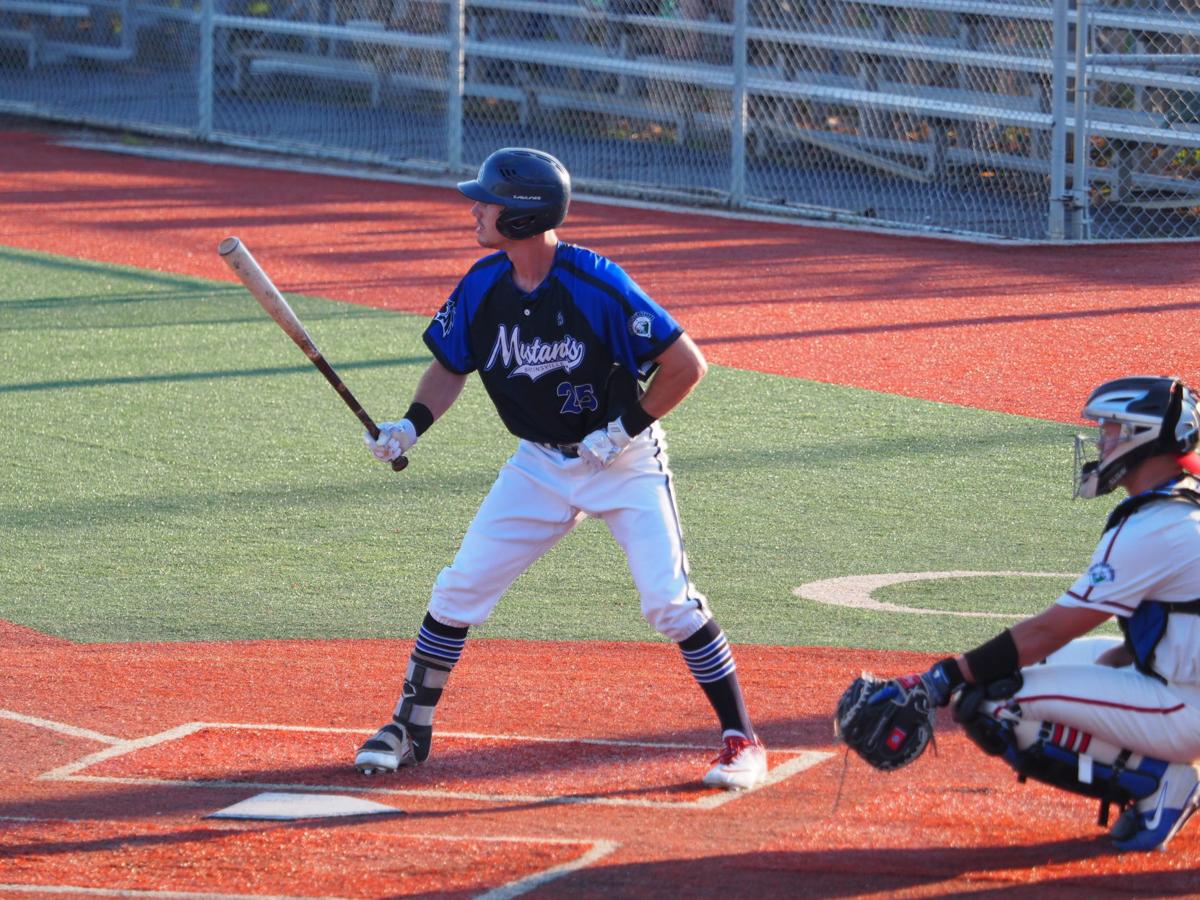 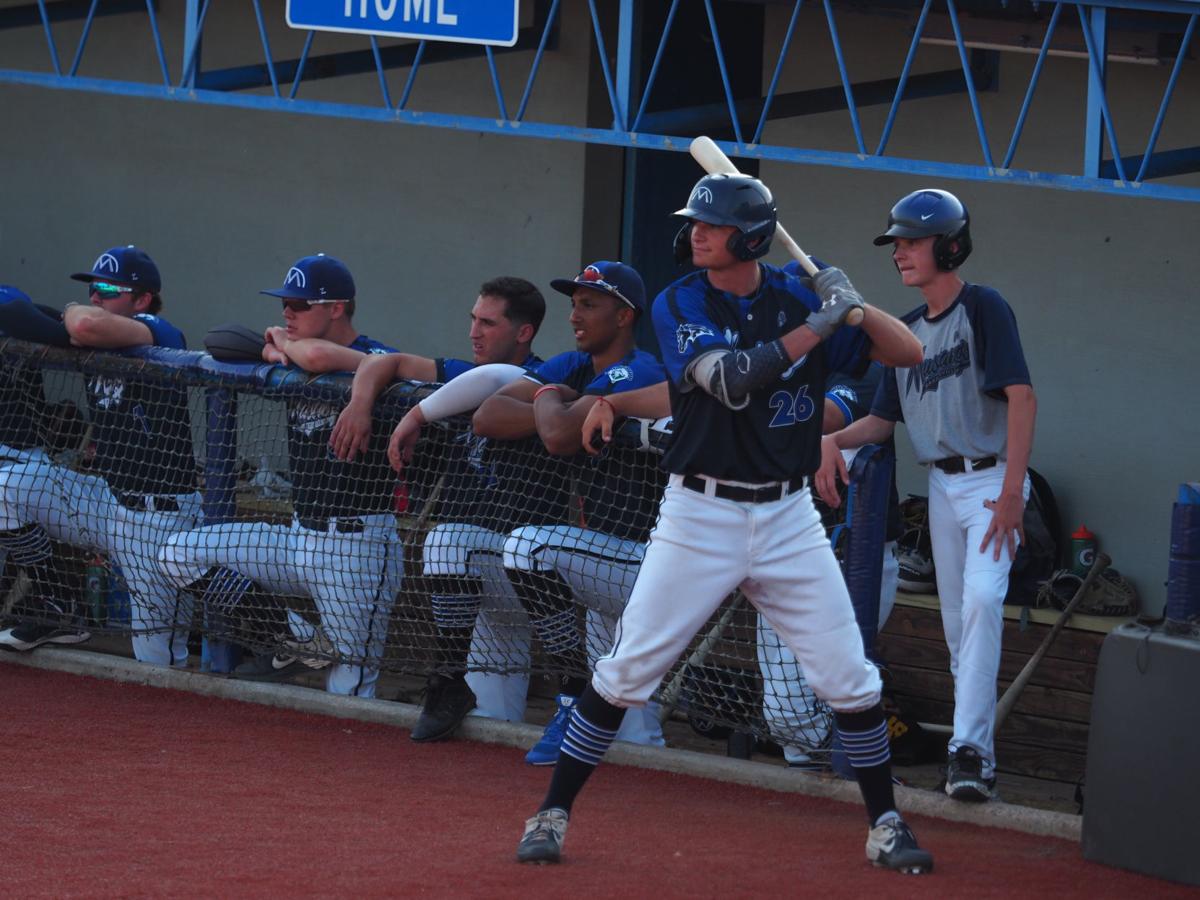 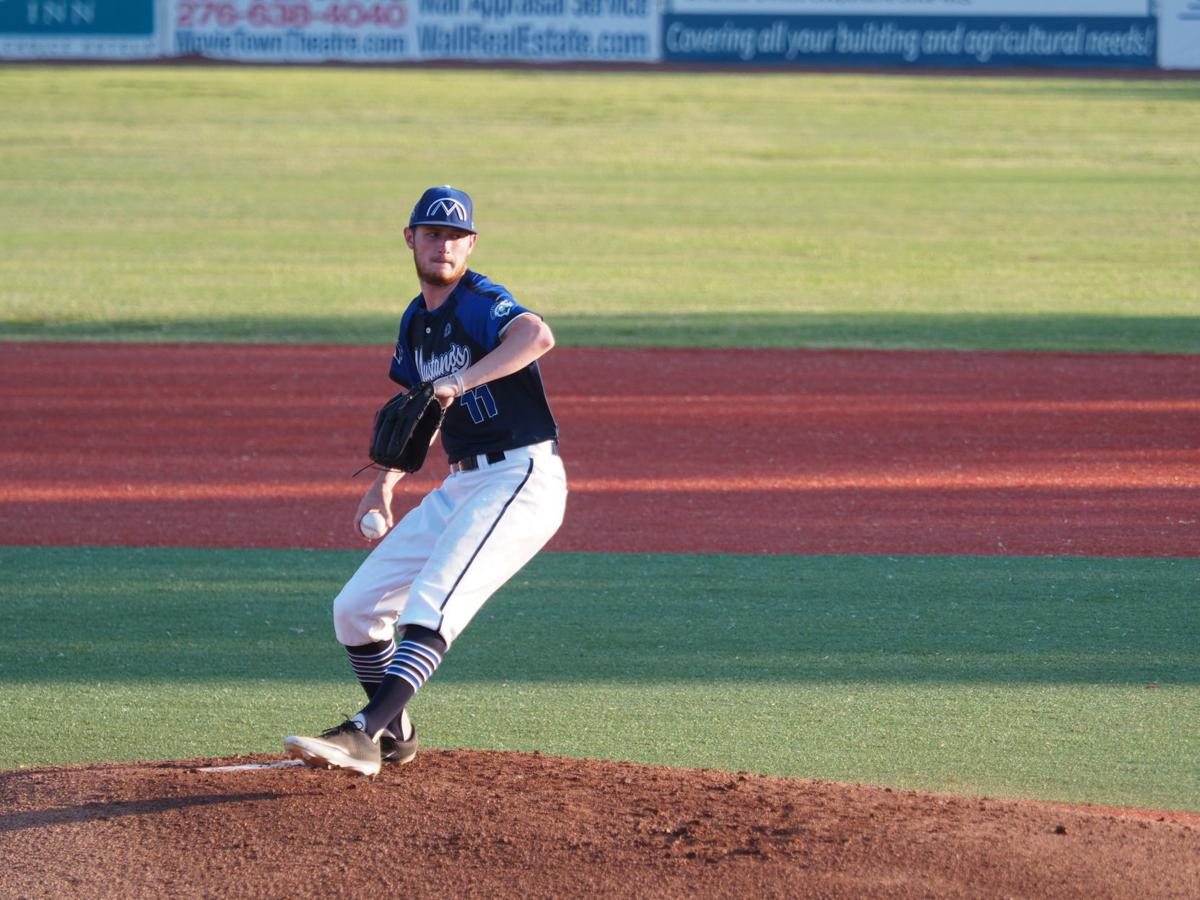 Mart prepares to swing during a recent game against the HiToms at Hooker Field. 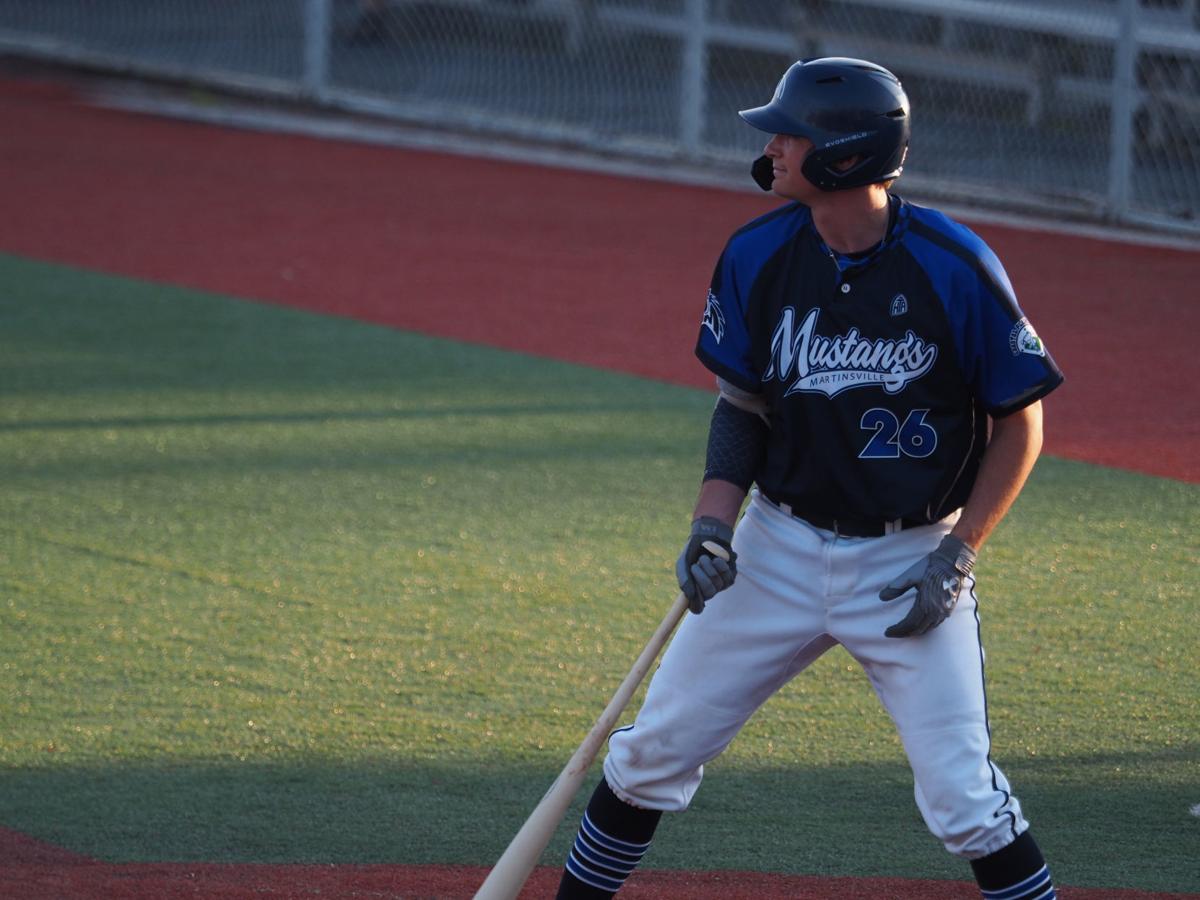 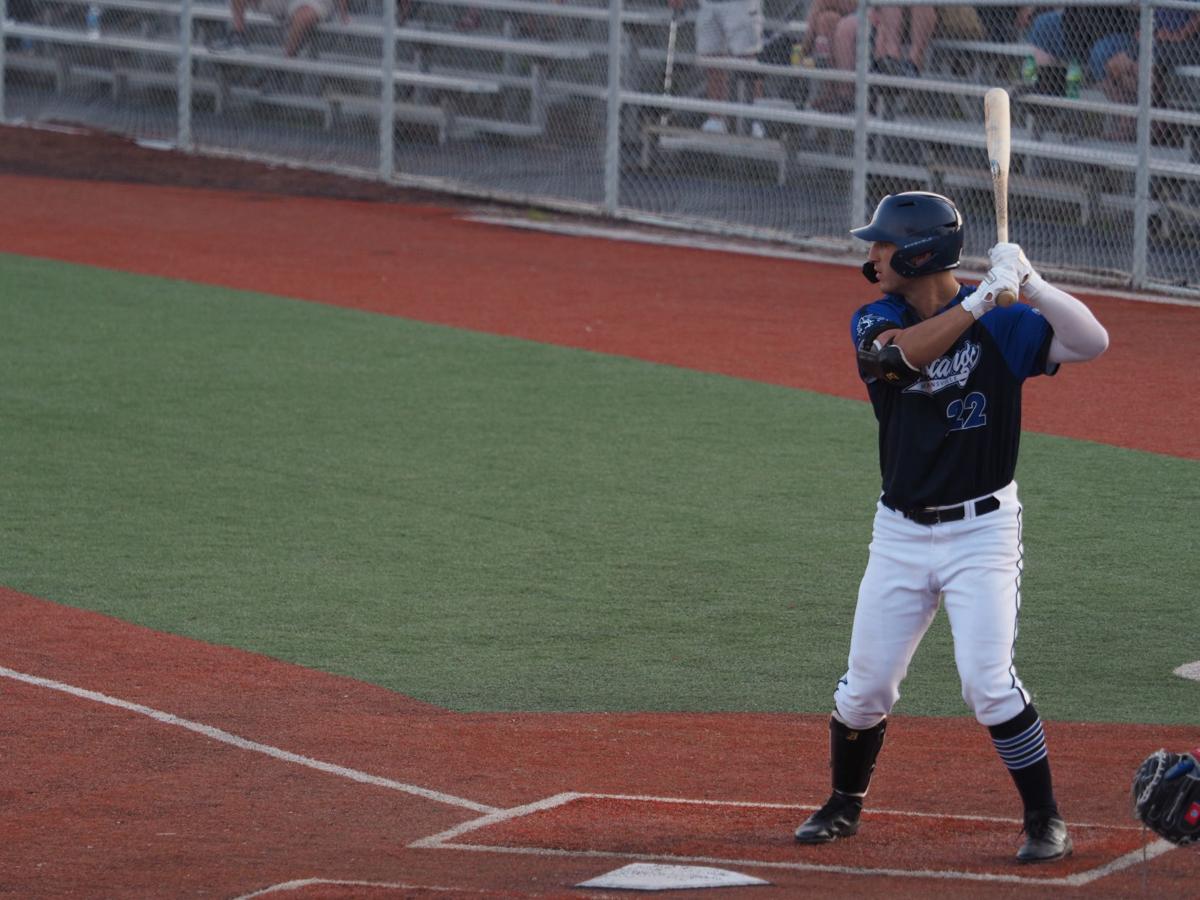 It wasn't the start of the season the Martinsville Mustangs were hoping for. After putting up a valiant effort in Game 1 Thursday against the High Point-Thomasville HiToms, falling 6-5 in 10 innings, HPT got the best of Martinsville in Game 2 Friday night, coming away with a 12-1 victory.

Friday at Hooker Field, HPT started the contest with 6-foot-6 pitcher Ryan Cusick on the mound, and the Mustangs had nothing for Cusick's punshing speed. The Wake Forest standout threw four no-hit innings with eight strikeouts. The only base runners for the Mustangs came off of two walks.

Martinsville broke up the no-hitter in the fifth when Joe Simone singled to right field, loading the bases. Jimmy Losh followed with a groundup to third that scored Logan Shaw, who walked to lead off the inning.

That was all the offense Martinsville would muster on the night. The Mustangs finished with three hits - one by Simone, Shaw, and Brady Slavens. Logan Fink walked twice.

The HiToms scored eight runs in the first five innings.

Tunstall graduate and Ferrum College junior Will Davis threw two innings in relief for the Mustangs, allowing one run on three hits with three strikeouts and two walks.

In Thursday's Coastal Plain League season opener, Martinsville's late comeback attempt came up just short. The Mustangs trailed 4-3 heading into the bottom of the ninth before forcing extras on an RBI single by Slavens to score Matt Goodheart, who led off the inning with his second double of the night.

The CPL rules require teams to start extra innings with runners on first and second, and both came around to score for HPT in the 10th on a Martinsville error and a sacrifice fly RBI.

Martinsville got one back in the bottom of the inning. Bassett graduate Christian Easley walked to load the bases with two outs, and Jimmy Losh followed with a walk of his own to score Slavens. That was all the Mustangs would muster. Goodheart grounded out to second to end the game.

The Mustangs had nine hits as a team. Slavens was 3-5 with an RBI and two runs scored. Goodheart and Joe Simone had two hits each.

Martinsville was back at home Saturday night for the final game of a 3-game series against HPT. Results were too late for publication.

For photos from Thursday and Friday's games, see www.MartinsvilleBulletin.com/sports

Mustangs first baseman Logan Fink attempts to tag out a runner during Friday's game against the HiToms at Hooker Field.

Mart prepares to swing during a recent game against the HiToms at Hooker Field.