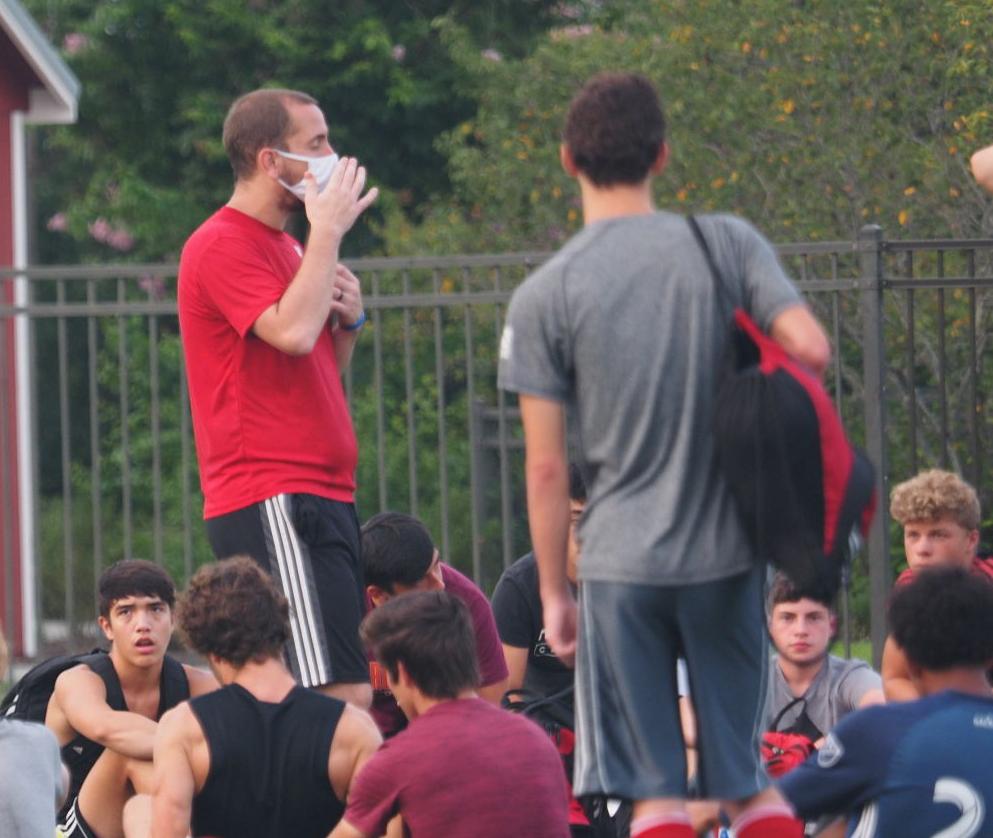 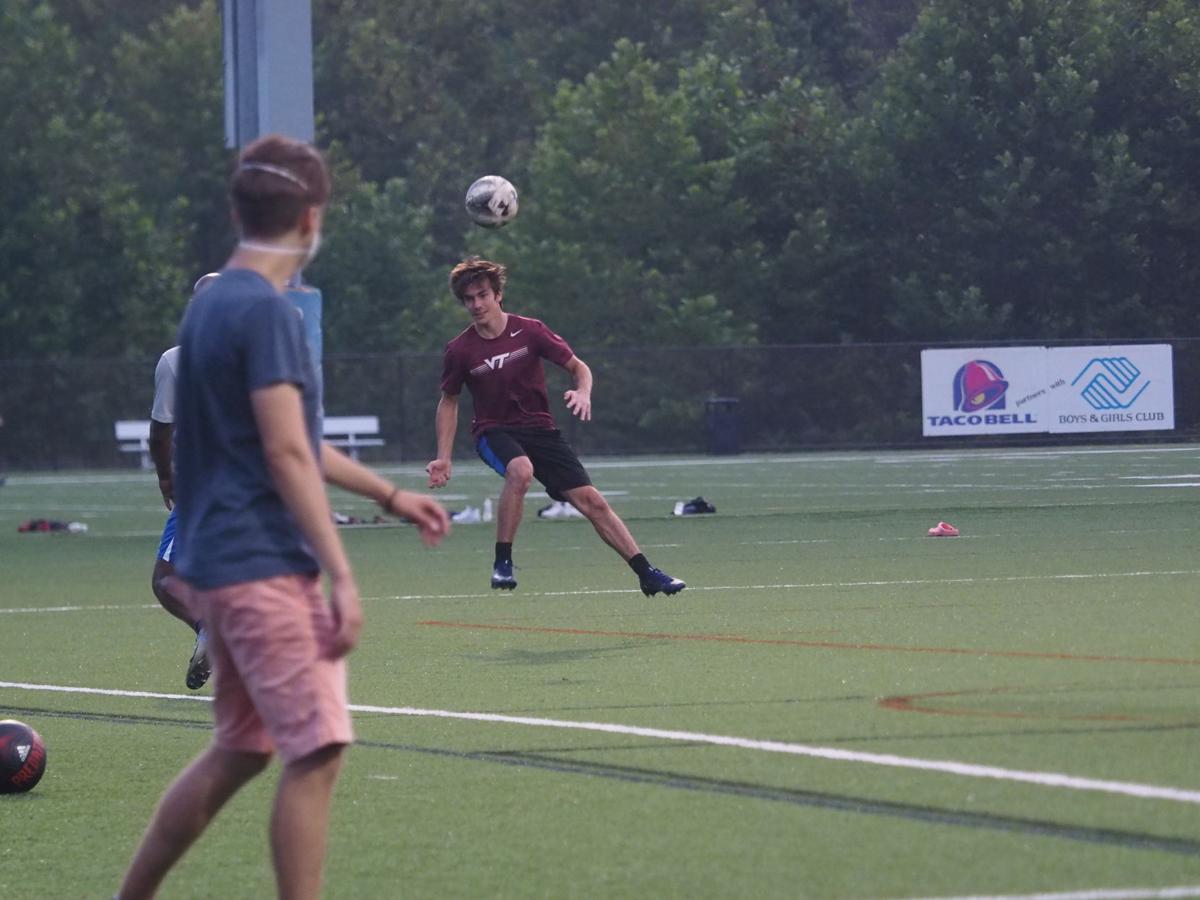 Drills were run with social distancing in mind, coaches wore masks, and temperatures were checked, but despite challenges the Piedmont Youth Soccer League did its best to bring a sense of normalcy back for young athletes in the area this week.

PYSL held its preseason team camp on Monday, Tuesday, and Wednesday this week at Smith River Sports Complex for the league’s nine travel teams for middle and high school players. About 140 players in all attended, according to SRSC Director of Operations and Marketing and PYSL Board Member Houston Stutz.

The organization typically holds team camp before the start of its fall and spring seasons. In the past officials would bring in coaches for various colleges to offer instruction for players, but PYSL Director of Travel Melinda Brightwell said, in an added safety measure against the coronavirus, they decided to just have in-house coaches hold practices so as to not bring in people from outside of the area.

That was one of several safety measures the league had in place. As soon as they arrived, players were required to have their temperature checked and answer health questions like if they had a fever or cough or been around anyone who tested positive for COVID-19. The night was also broken up into two groups, with efforts in place to keep players with their own teams and maintain social distancing. Players were also asked to stay away from the area when they weren’t practicing, and leave around the perimeter of the complex to avoid a large group of people all in one area leaving at the same time.

Coaches wore masks while on the field, and some players opted to wear them as well. Drills were mostly based on improving individual skills and maintaining distance.

Brightwell, who has a daughter and a son who both play in the league, said she was happy with the safety protocols in place.

“I feel totally at peace with my own kids being out here. I feel good about it,” she said.

“At this age, as these kids interact they’re responsible enough to know if they’re not feeling well. We’ve stressed to them through team managers and coaches, if you’re not feeling well it’s okay. You don’t have to be here. There’s no concrete penalty if you aren’t here. We would rather you stay at home.”

Even with safety protocols in place, it was worth it for players to finally get back on the field after so many months away. Most hadn’t played in an organized soccer practice since the schools canceled spring sports seasons in late March.

“Amazing. It feels amazing,” said PYSL player Daniel DeVivo, a member of the high school boys team. “It feels great to be out of the house and finally moving around again and getting some work in. And definitely it gives you time to not think about everything that’s going on. It’s like a safe zone kind of thing.”

“I think everybody is just glad to be out of the house and get back to some idea of normalcy,” said Brennan Murphy, who coaches three PYSL boys teams. “Get back in the swing of things, get back out here again, kicking around, seeing their friends. You can tell they’re really enjoying it.”

DeVivo said he participated in a few other practices last week, but it’s taken him a bit to get back into soccer shape after so many months off and only being able to work out at home. He said he and his teammates were cooperative with the social distancing aspects of the practices, and didn’t mind as long as they were able to get back on the field and play.

Murphy said the drills were all about maintaining a sense of normalcy.

“We want them them still enjoy being out here but at the same time be safe with it,” Murphy said. “We’re catering a couple drills trying to maintain social distancing to the best of our ability but also getting back to some idea of a normal routine as well.”

Brightwell could see in her own kids and other players that their spirits were dampened when all the spring sports seasons were canceled, especially with fall high school sports also being moved. Her hope is that PYSL can be a bright spot for the young players in a difficult year.

“For them to get back out here and get their feet back under them and actually have some social interaction, I think that’s good for them, not just physically but from a mental standpoint I think that’s super important too,” she said. “Because a lot of these kids, they’re still doing virtual school… This is as much social interaction as they’re getting. I think it keeps them moving and it keeps their mind busy I think, which is good.”

PYSL travel teams will begin their regular practices next week, Stutz said. The PYSL rec league is also still planning to have a season which will run from about September 19-October 24, with an extra week tacked on at the end for possible makeup dates. Stutz said the rec season was bumped back and condensed given there are still so many questions and unknowns surrounding the coronavirus.

The complex will continue with safety protocols in place for travel and rec soccer games, including staggered starts and more weeknight games to avoid large crowds, with no more than four teams playing at the complex at a time.

The PYSL travel league is still in the process of confirming tournaments for the fall, but there are plans for teams to play in a tournament in Roanoke on August 22-23. It will also host the annual Piedmont Shootout at SRSC on November 13-15.

“We’re doing everything we can to give the kid a season and do it as safe as we possibly can just like all our other events,” Stutz said. “It’s kind of nice having events that are here before our travel program gets going because that’s allowed us to learn protocols and see and implement things and learn what works, what doesn’t work as we get ready for the club season… It’s a learning process for everybody.”

In an abnormal year, players and coaches are just happen to get back on the field as much as possible.

“I think they’re all just really excited to be out of the house and be back to playing soccer because you can tell a lot of them have been chomping at the bit to get back into it,” Murphy said. “It brings a big smile to all of our faces to see them out here again.”

He lost his house to a fire earlier this month.

Special to the Bulletin

The Martinsville Junior Mustangs added a third win in four games to their record Friday night with a 3-2 victory over the HiToms Grays.

This fall is all about learning experiences for the Martinsville Junior Mustangs team.

Local athletic directors talk some of the challenges with the schedules for the upcoming sports seasons.