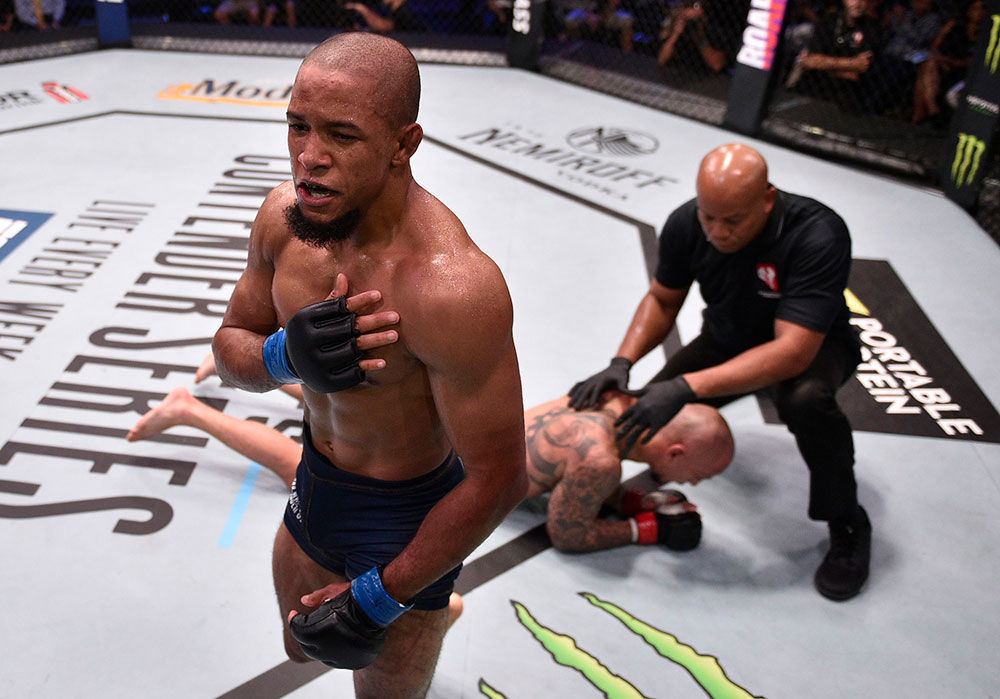 Tony Gravely was given a UFC contract after competing on Dana White's Contender Series. 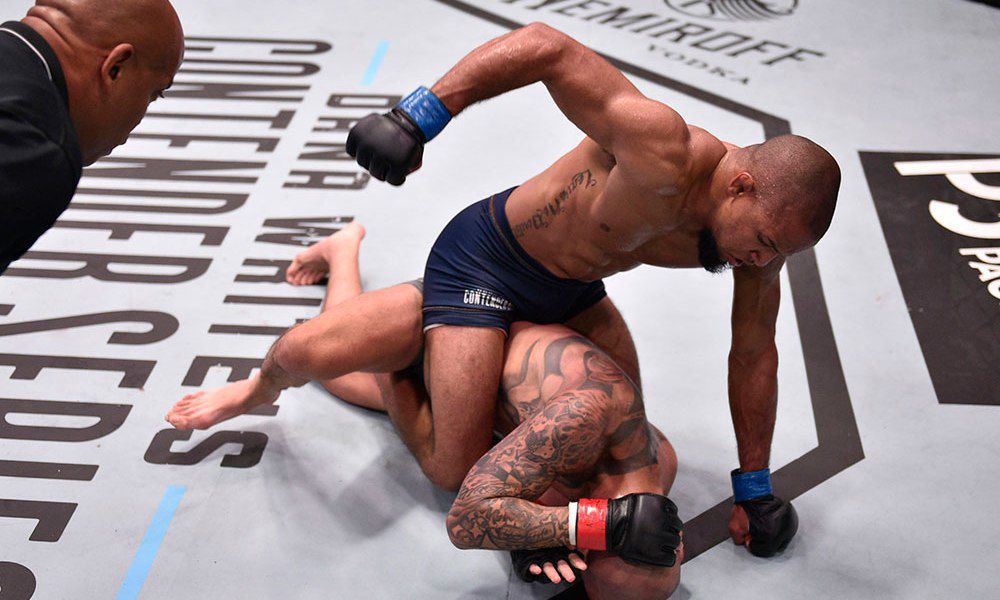 Tony Gravely competed on Dana White's Contender Series, a show that takes up-and-coming UFC fighters and gives them a chance to compete for a UFC contract from the league's president. 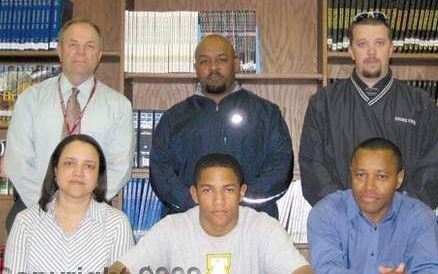 Tony Gravely (front, center) signed to wrestle at Appalachian State after graduating from Magna Vista in 2009. 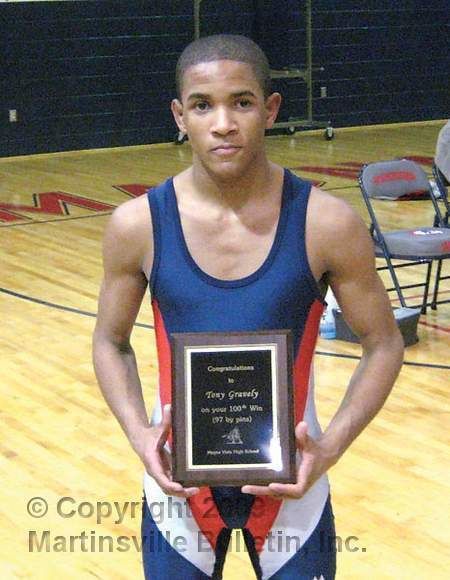 Former Magna Vista wrestler Tony Gravely holds a plaque he received for his 100 victory in the 2009 wrestling season. 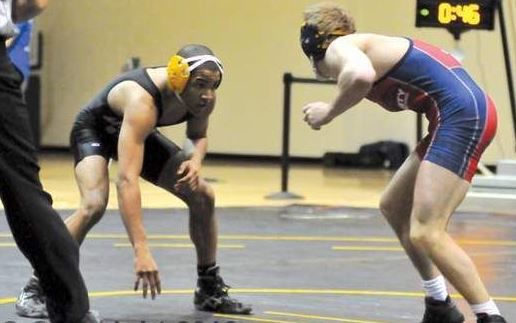 Appalachian State wrestler Tony Gravely (left) of Martinsville takes the mat for one of three matches, all of which he won, on his way to a SoCon title in 2010. 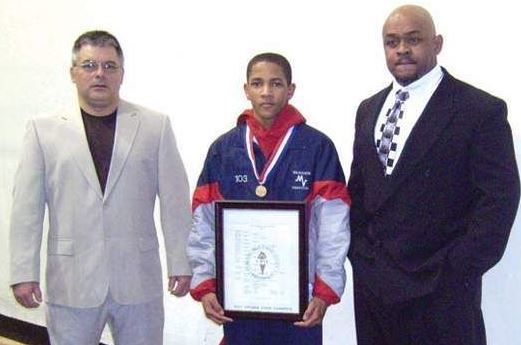 The dreams of being a mixed martial arts fighter started for Tony Gravely when he was about 6 or 7 years old.

That dream now is a reality.

Gravely was signed by the UFC on Aug. 13, and he is awaiting word on when he will have his first fight as a UFC professional.

Gravely was born and raised in Martinsville and started taking taekwondo lessons from his dad when he was about 3 or 4. Those are some of his earliest memories. He was barely old enough to walk.

He started wrestling in middle school and followed the sport through school, winning two state championships at Magna Vista before graduating in 2009 and receiving a scholarship to Appalachian State.

He said he kept dreaming of UFC, which was growing in popularity and scale, but was unable to move to mixed martial arts until after college.

UFC is a mixed martial arts promotion company that started in 1993. Sixty-five fighters have signed contracts to join UFC so far this year, and the league has nearly 600 fighters signed worldwide.

Gravely graduated from Appalachian State with a degree in construction management, but he said working as a construction project manager was never his passion.

In the back of his mind, he always wanted to fight.

“I pretty much went to college just to wrestle,” Gravely said. “I wanted to wrestle. I had no idea what I wanted to do. I picked something that really wasn’t for me.”

‘What’s the hold up?’Gravely started training in MMA after graduating from App State, and soon he was fighting as an amateur. But, not getting paid to fight, the sport was just a hobby at first. The long hours at work coupled with 2-3 additional hours at the gym made for long days, and Gravely kept up that schedule for about a year and a half.

Eventually, he was able to turn professional, but he still maintained his full-time construction job.

It was in 2016 when he sat down with his wife, Kayla, and both their parents to discuss turning his focus to fighting.

“I think I had three pro fights and I was like, ‘Man, if I could just do this and just train full time, be a professional fighter, just fight and that’s all I did I would be so much better,’” he said. “I was talking to my wife, and I was like, if I could do anything with my life it would either be fighting related, wrestling related, or do something with kids or animals because I love kids and I love animals. So we talked about it ... and finally somehow I let them convince me to be a full-time fighter. Just train full time, fight full time.”

The switch was difficult at first for Gravely and his wife. They went from two steady incomes to just one. Kayla Gravely was working at a school, but she also quit to take a job at a daycare that would be more lenient with letting her off work to go to Gravely’s fights. That was another pay decrease.

“That was really rough as far as you get comfortable with a certain amount of income and being able to do all this stuff with your money, especially when you’re young and you start getting money,” Gravely said. “And you go from that to, oh now it’s one-fourth or one-third of what we used to be making.”

The money situation was rough enough, but training for MMA full time was rougher. Win or lose, he was putting his body on the line every fight. Sometimes it was almost too much.

“It’s been a long journey. ... I’ve hit my bumps, my low points where there have been times where I wanted to quit, I thought about quitting, and I didn’t for multiple reasons,” he said. “I had to remember why I started doing this. And my wife wouldn’t let me quit, my family wouldn’t let me quit, and they still believed in me. Even at my low points they still believed that I could do what I said I was going to do.”

His lowest point came about two years ago. His break came earlier this summer.

Gravely was invited to compete on Dana White’s Contender Series. White, the president of UFC, invites 10 up-and-coming fighters and top prospects to compete in what Gravely called a “job interview” of sorts. There are no guaranteed contracts given out to winners after five fights, but White will offer contracts to fighters who he feels are good from a business standpoint: fighters with good personalities, exciting and popular with fans, as well as skilled in the octagon.

Following this season, White offered contracts to four fighters on the Contender Series. Gravely was one of them.

“That makes me feel so much better that I was chosen by the president himself,” Gravely said.

Finally signing his UFC contract was a weight lifted off Gravely’s shoulder. Going into each fight, the fear of losing and getting pushed further away from your dream of making a living in the sport gets ever more difficult.

But after more than two years since quitting his job to focus on MMA full time, he said, “It’s about time.”

In every interview and at every fight, Gravely has made sure to mention his hometown and be a good representative for Martinsville and Henry County.

Even though he doesn’t live here anymore – he lives in Radford and trains at Tech MMA and Fitness Academy, where he also teaches kids and adults and works as a personal trainer – Martinsville will always be home, and he said he is thankful those he grew up with are following his career.

With very few UFC fighters from Virginia, and none from the southern part of the state, Gravely said he knows he’s representing more than just himself when he fights.

“I take pride in that,” he said. “I always make sure that I represent Virginia and especially small towns. Every time I get a chance to talk I always talk about Martinsville and being from Virginia and all the small-town people.

“I feel like it helps inspire people or motivate people. Just because they’re from a small town or a small gym and don’t think they have a lot of opportunities doesn’t mean they can’t go on to do cool things or big things or whatever it is they want to do.”

From his wife to his family, coaches, teammates, and neighbors back home, no one has given up on Gravely, and he’s felt the support from home every time he fights.

With each of his fights getting bigger and bigger, the more fans he draws.

“The amount of support I’ve received from them, people I’ve never met before watching my fights. People that aren’t even fans of mixed martial arts watching my fights just because somebody from Martinsville was there. It just means a lot to have support from everybody and everybody from my community to watch not just me but to watch something positive and unite for something felt really good to me.”

Gravely hasn’t heard when his first official UFC fight will be, but he’s hoping to get at least one in before the end of the year.

Whenever that happens, he will get to hear his name announced as a UFC fighter, and his dream from his childhood will finally be a reality.

It may only have been two years, but to Gravely it seems like a long time, especially given the number of fights he has had and the struggles he has gone through to get to this point.

He said his hope is maybe some other young athletes in a small town in Virginia will watch him and get their own dreams. He’s proof that working hard will get you there one day.

“To finally get to this point, it’s really surreal.”

Phase 3 of the reopening has special touch in Martinsville: The Mustangs are back with baseball

The stands may have looked different with fans, some donning masks, sitting far away from one another and stopping at hand-sanitizer stations …

Every summer, the Martinsville Mustangs bring in players from across the country. The 2020 team has a roster that includes players from Arkans…

Did you know: A football and college baseball star once played at Hooker Field in Martinsville

A few weeks ago I did a series of stories looking at players from the Martinsville Phillies and Astros who went on to play Major League Baseball.

With teams having to drop out of Coastal Plain League play this summer, the CPL had to re-release the Martinsville Mustangs schedule for the 2…

The Martinsville Mustangs had a solid start to their season, going 3-2 in five exhibition games as they prepare for the season opener tonight …

This was never going to be easy.

Due to restrictions in Phase 3 of the re-opening plan for the Commonwealth of Virginia and implications to the speedway’s insurance coverage, …

The NFL plans to play the Black national anthem before Week 1 games. Hear the anthem here.

Additionally, the league is working collaboratively with players to recognize victims of systemic racism throughout the season.

Tony Gravely was given a UFC contract after competing on Dana White's Contender Series.

Tony Gravely competed on Dana White's Contender Series, a show that takes up-and-coming UFC fighters and gives them a chance to compete for a UFC contract from the league's president.

Tony Gravely (front, center) signed to wrestle at Appalachian State after graduating from Magna Vista in 2009.

Former Magna Vista wrestler Tony Gravely holds a plaque he received for his 100 victory in the 2009 wrestling season.

Appalachian State wrestler Tony Gravely (left) of Martinsville takes the mat for one of three matches, all of which he won, on his way to a SoCon title in 2010.