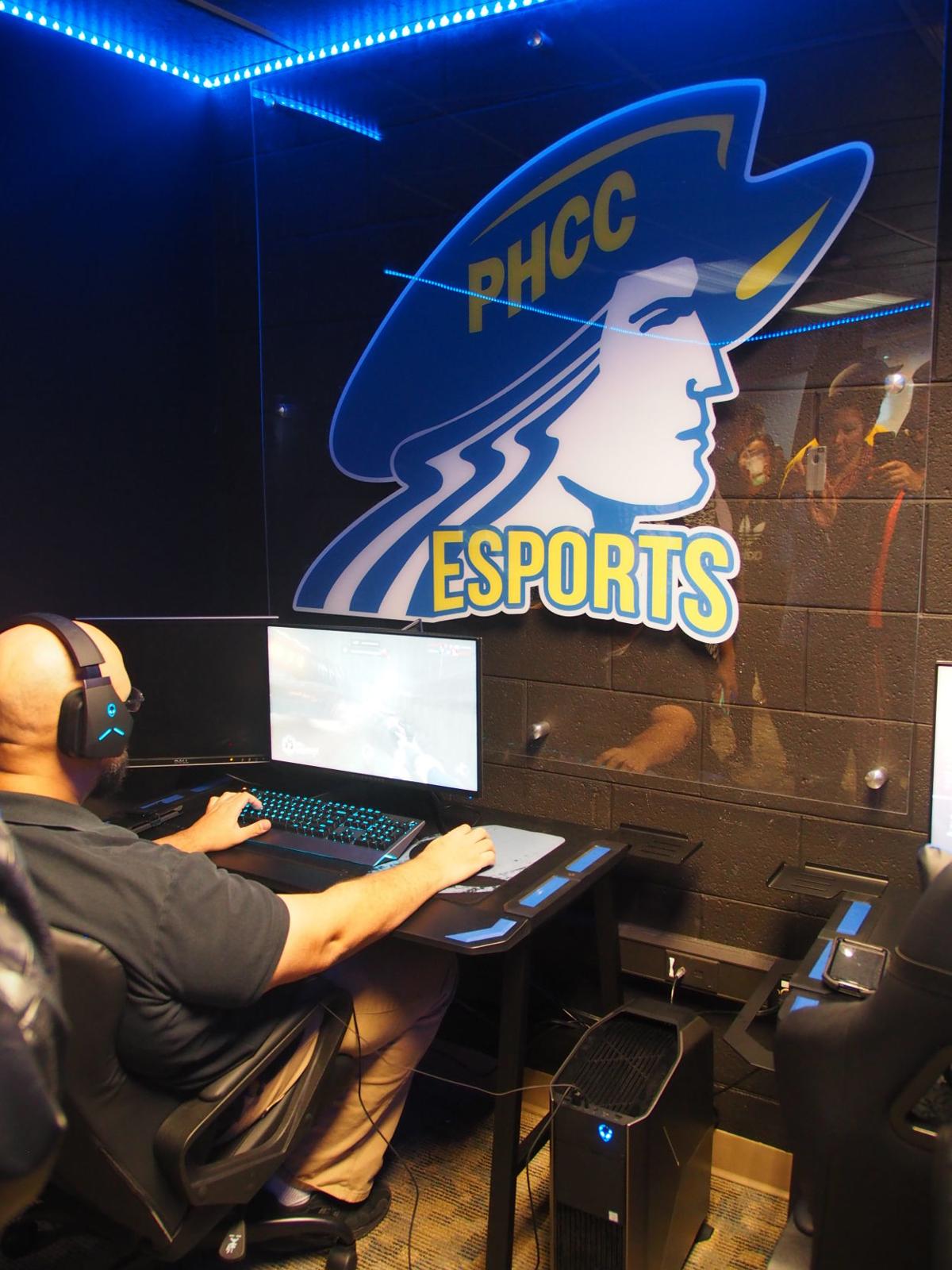 Patrick Henry Community College unveiled its new gaming arena at an open house Wednesday, complete with seven brand new computers all equipped for the school’s new eSports team, which will begin its first varsity season in the fall. 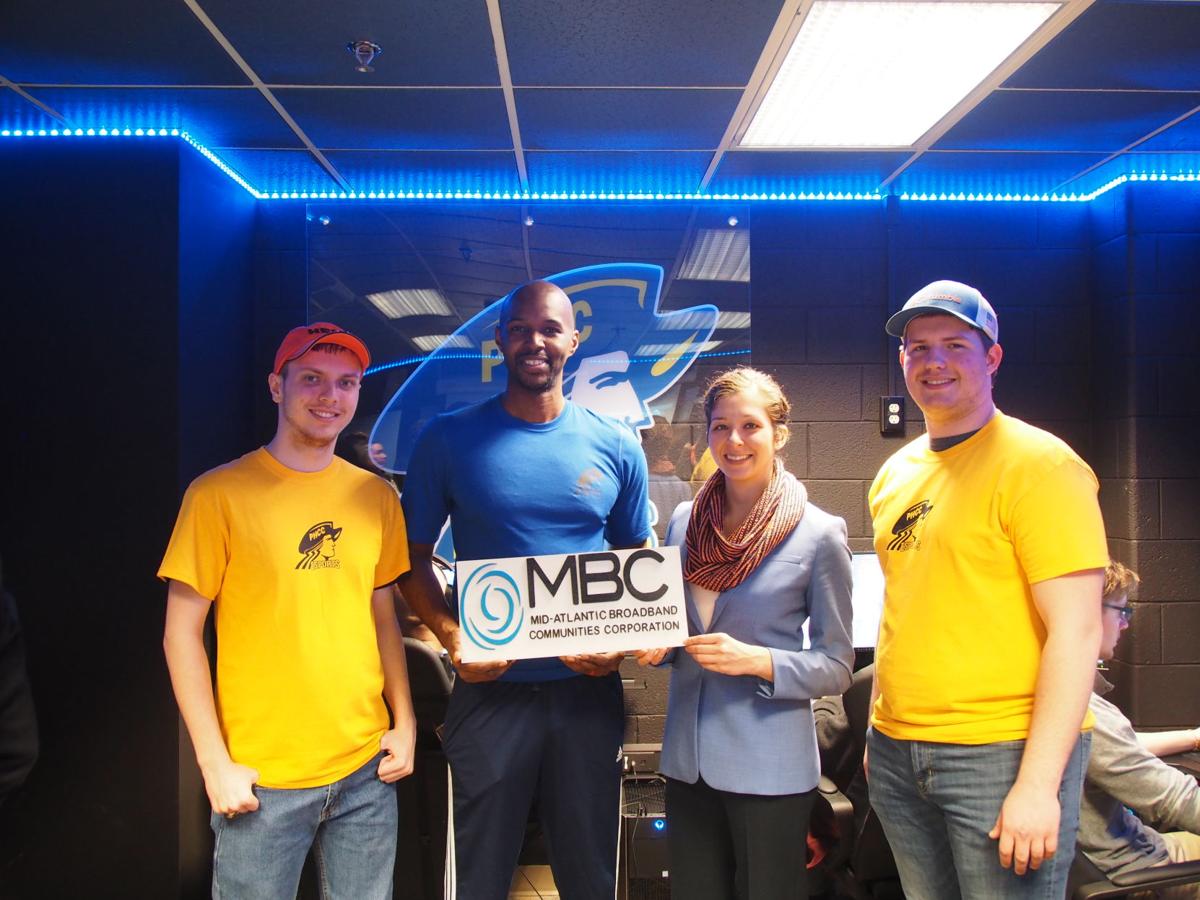 There’s a new sports arena on the campus of Patrick Henry Community College.

It doesn’t have a traditional court or field for playing. It doesn’t even have stands for fans. In fact, as of last semester, this arena was still a classroom on the second floor of the school’s West Hall.

This new arena is equipped with seven computers, all with headsets and keyboards that light up different colors. The walls are painted black, with neon blue lights running across the top. In the back of the room is a giant PHCC emblem with the words “ESPORTS” printed below.

The room will serve as the school’s “gaming arena” – a practice facility, video room, locker room, library and competition area for the new eSports team, which will begin its first varsity season in the fall.

Just like the Patriots have varsity teams in baseball, basketball and volleyball, the eSports teams will also have their own individual varsity squads playing video games such as Overwatch, League of Legends, Fortnite, and iRacing, among others. The teams will play under the National Association of Collegiate eSports, which currently has more than 125 member schools competing.

Just like rest of Patrick Henry’s athletes, members are required to be enrolled in 12 credit hours at the school, and maintain a 2.0 grade-point average. And just like other athletes at the school who are working towards transferring to 4-year schools, the eSports athletes can do the same. Team captain Taylor Toler, a student in the school’s Industrial Electronics department, said he receives offers often to go pro and has three college scholarship offers currently on the table.

“Once you start playing in these big tournaments, it gets your name out there, and people look for that,” said the other team captain, Cody Meadows. “Sponsors and stuff will go with that in a heartbeat. It’s just getting to that point to be able to fight for what you like and get the sponsorship money to help out.

“I joke with Taylor and Brian all the time. I’m pushing iRacing as much as I can because I know if I can push it that far I can help the college a lot, as well as help me out and get with those big teams.”

PHCC Athletic Director Brian Henderson admits he didn’t know anything about video games or how eSports works, but he attended a conference at Georgia State University last fall and came back convinced it was something the school needed to try.

“One thing that we try to do here at Patrick Henry is be innovative,” Henderson said. “We see the world is going to sports and technology and putting those two together. We wanted to put all three together, sports, technology and academics.”

The team is sponsored by Mid-Atlantic Broadband, which helped in part to provide funding for the computers and revamped gaming arena that the school unveiled at an open house on Wednesday.

Henderson put up signs around campus for meetings of interested students last November, and Toler and Meadows were at the first one. Since then, they have gained five members for the club team, which may play some tournaments this spring, with many others expressing interest.

“We’re filling our roster back up by the day,” Toler said. “Last week Brian called me around four and said, ‘Hey, I got another guy for the team.’ And he called me two-and-a-half hours later and said, ‘Hey, add these two guys. We’ve got two more coming.’ Finally, he said, ‘I’m just going to tell them to come to the open house because I’ve got so many people who are emailing me about it.’”

Part of a team

Part of the appeal of colleges offering of eSports is giving students – not just at PHCC but across the country – a chance to be part of a team even if they’re not athletically inclined.

“Cody had a quote yesterday that stuck in my mind… Which is the real reason I decided to go with eSports,” Henderson said. “He said, coming to PH, he really came here for academics… he didn’t feel like he could be a part of any team because he wasn’t an athlete. Now he has a team that he feels like he can a part of. And that’s the ultimate goal. We have a bunch of student athletes on campus that aren’t athletic, but they’re great at this sport right here.”

“Now that they have eSports, I’m here, and I feel like I can be a part of something I feel like I can actually do,” Meadows said. “I’m not taking this for granted at all. I’m just so happy that they put the effort into this. This is a kid’s dream. I know I’m 19, but I’m still a kid at heart.”

It also gives other athletes a second chance. Toler was a baseball player all through high school, but a shoulder injury just before the start of his senior year derailed any hopes he had of possibly playing at the next level. But with eSports he can still have that competitive outlet.

And eSports, to him, is just like being part of any other sports team. He said he will often practice two hours a day, just like he would in baseball. And he spends time both in the game and in real life with his teammates.

Toler was a semipro for the game “Call of Duty” in high school, but gave it up when his team at the time folded. After spending hours training his nephew on the game, he saw PH as a chance to get back into the gaming world.

And he wants to prove that, just because he isn’t swinging a bat or throwing a baseball anymore, he’s still an athlete at heart.

“All the time. All the time,” Toler said when asked if he hears people say video games aren’t a real sport. “And I’m out to prove them wrong. You can ask any one of these guys in this room, it’s a skill.

“I train my nephew, but I tell him all the time: ‘This isn’t something I can teach you. It’s got to be something you’ve got to develop. I can show you, and I can draw you a picture and do it for you, but you’ve got to do it yourself . … When push comes to shove I can’t be the one sitting on the stage.’”

Henderson said there’s hope that the team members can be something of a mentor to other young students in the area hoping to learn more about the games. There are already plans in the works for a high school camp during spring break, and he said the school is open to local high school or middle school programs having club teams at their facility to take advantage of that technology.

Just like in other sports, going pro is the dream for most the players on the team. With the newness of eSports, the sponsors and pro teams are itching to find the next best talent in the gaming world. And, unlike other sports in which an athlete has a competitive window, professionals in eSports can play at virtually any age.

The team has the ability to play in tournaments right from campus in Martinsville, or they could travel to “land events” and play in front of crowds, which sometimes number in the thousands, with millions of others watching online. For a team that hasn’t even played in its first tournament, the possibilities are already endless.

“We want to continue to get sponsors and get jerseys and put a sponsor’s name on the back of our jerseys and represent not only Patrick Henry but others who believe in what we’re trying to do here,” Henderson said.

“We’re just going to keep rolling with it and see how far it takes us,” Toler said.

NFL Week 6 Market: Will weather be a factor?

NASCAR Xfinity Series driver Brandon Brown had a lot to celebrate this week after winning last week's race at Talladega. Brown brought the trophy back to his home in Virginia, where he'll celebrate more when the series comes to Martinsville Speedway later this month.

The Virginia High School League released the football region rankings on Thursday, with three local teams ranked in the top 8 of their respect…

The Detroit Tigers plan to retire the number of Martinsville's Lou Whitaker in a ceremony next season. Representatives from the team were in town this week to prepare a video for the ceremony.

With crazy turn of events, Martinsville escapes with victory over Chatham

Chatham and Martinsville’s football teams entered Thursday night’s non-district matchup expecting a dogfight and that’s exactly what they got.

Patrick Henry Community College unveiled its new gaming arena at an open house Wednesday, complete with seven brand new computers all equipped for the school’s new eSports team, which will begin its first varsity season in the fall.