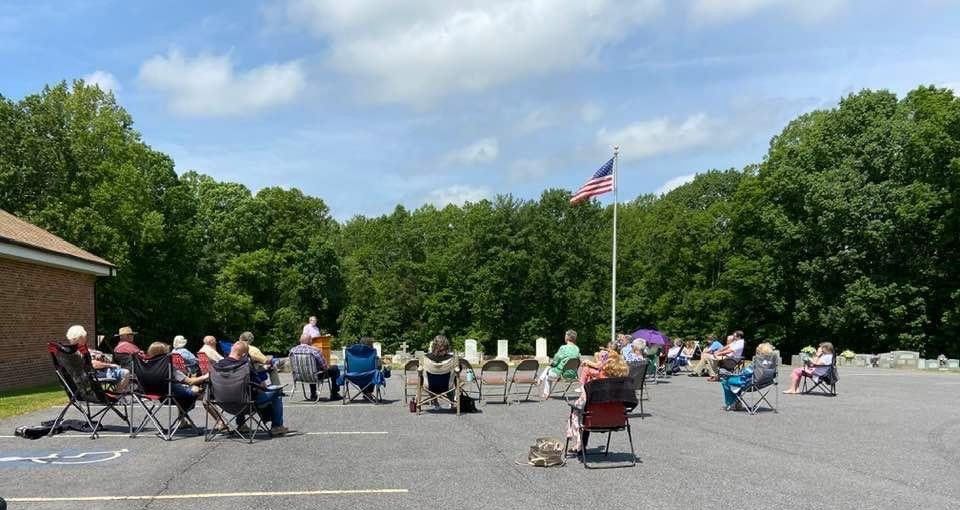 The congregation of Old Well Christian Church in Spencer meets outside for Sunday service while the sanctuary is closed. 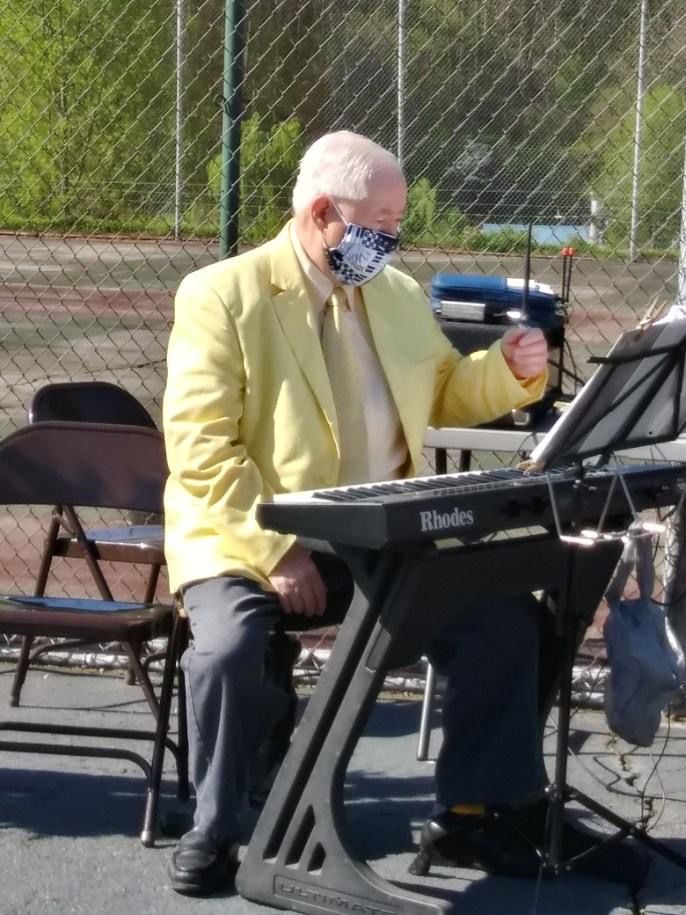 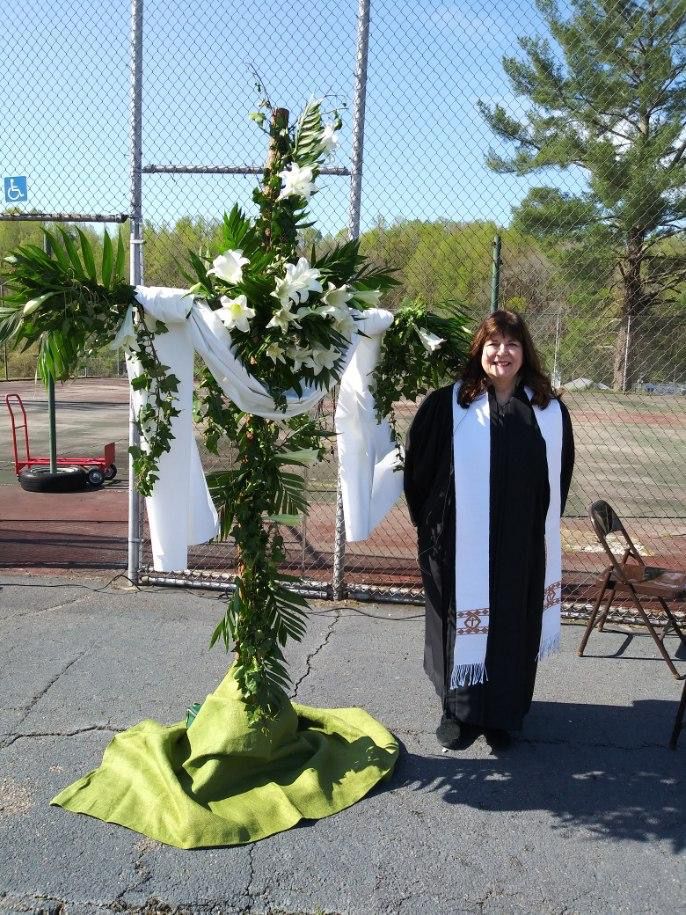 Susan Spangenberg of Pocahontas Bassett Baptist Church said the pandemic restrictions forced churches to get creative with worship, and she expects many of those new methods are here to stay. 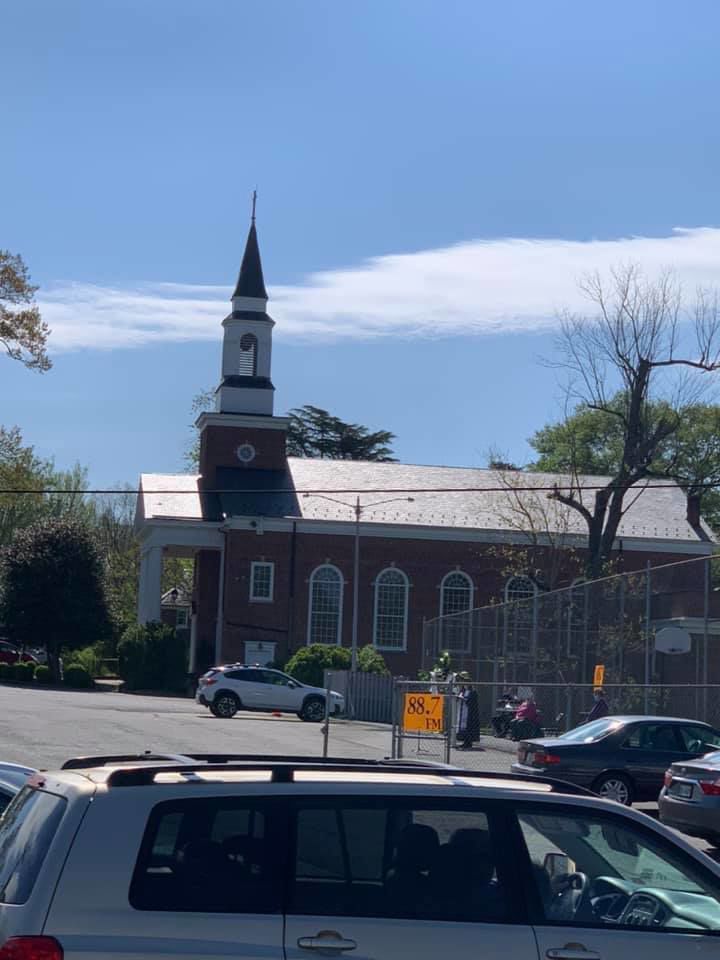 Patrick Sharpe took this picture of a drive-in worship service at Pocahontas Bassett Baptist Church. Pastor Susan Spangenberg said it still would be fun to continue to have an occasional drive-in service even after the pandemic restrictions are lifted.

Sometimes called traditional and old fashioned, churches lately have been taking the lead with new technology.

They’ve learned how to reach people for God over the internet through methods such as Facebook Live for showing worship services and Zoom video conferencing for Bible study – and even once pandemic restrictions are lifted, those methods seem to be here to stay.

Even though the governor has eased restrictions in Virginia – houses of worship now are allowed to resume gatherings indoors, at 50% capacity – churches are keeping their new methods of reaching people and, for the most part, shying away from filling their buildings just yet.

The Martinsville Bulletin asked churches, a mosque and a synagogue across Martinsville and Henry County how they have been dealing with the lockdown and then the easing restrictions. We identified 201 active houses of worship in the area and reached out by phone, email or social media to the roughly three-quarters which had active Facebook pages and/or websites, or email addresses on record with the Bulletin.

The survey was part of a national study by Lee Enterprises, the Bulletin’s parent company. Lee has 75 daily newspapers and nearly 350 specialty publications in 26 states. Four thousand houses of worship responded.

Questions included when the interior of the building was closed for gatherings; if a reopening date had been set; what new safety procedures are in place for gatherings; does the church have services online, and if so, through what platform; and what else is the church doing.

In Martinsville and Henry County, we found:

Most – 89% — have virtual (over the internet) services. Sixty-two churches do and eight do not, and one does not have its own, but its members use the online services of the larger religious body.

Three churches hold services over a telephone conference call: Members call the telephone number, enter the code for that call and are connected.

Eighteen percent have their sanctuaries open now for services, with 8 reporting being open on May 17 and 43 closed. Two of those with sanctuaries open said they never closed, because their congregations are small enough that they could meet the limit of 10 people inside. Two churches are holding outdoor services.

Sixteen of the 71, or 23%, are holding drive-in service — families remain in their vehichles, which are parked on the church grounds, and the sermon is broadcast over a radio transmitter that can be heard by tuning in to the particular station.

Though the survey didn’t ask about choirs, many churches reported cancelling their choirs, at least for the time being.

“Our choirs will not rehearse nor sing,” said Phyllis Hairston of Shiloh Way of the Cross Church of Christ of the Apostolic Doctrine. “We will probably continue with praise and worship with a limited number being that our choirs average 45 to 50 members. Can’t have that due to social distancing. Believe me, this has changed many things.”

Churches probably would remain with “smaller praise teams and doing more congregational songs. We, the church practicing social distancing, it would be very hard to have our choirs of the past,” said Mervin Brown of Moral Hill Missionary Baptist Church.

“Bringing the choir back will probably be the last step, because of the inherent risks involved,” said the Rev. Nicholas Hull of Christ Episcopal Church.

When it comes to the technology, “like everybody else, we were initially forced to figure out a plan B when sanctuary worship became unsafe,” said Susan Spangenberg of Pocahontas Bassett Baptist Church.

Once things go back to normal, some of those new practices are likely to stick – such as the drive-in service at Pocahontas Bassett. It’s fun, Spangenberg said, and even gets the attention of people who don’t normally go to church, so the church might do it now and then as a treat.

Online videos of the services also have received such positive reviews that they will replace the former audio versions of services that used to be posted to the websites, she added.

Additionally, the online forms of worship will fill the gap when church is cancelled due to bad weather, Spangenberg said.

“Coincidentally, we were already planning to stream Sunday services before the pandemic,” Hull said. “Getting that equipment installed in the sanctuary was already part of our renovation of the sanctuary and undercroft. Hopefully we can continue this practice after we have re-gathered.”

Posting videos “has been an excellent opportunity for all churches to discover ways to reach more people,” said the Rev. Kelvin Perry of Grace Presbyterian Church. “Most of these methods are not new and some churches had already been using them, but for some, it has taught us that we can spread the Good News in other ways”

The adaptations churches are making now “will impact the worship experience as we move forward,” Brown said. For one thing, very many people “focus on the worship in the building, but we can worship in any place.”

Those churches which practice Communion have tried to work around restrictions through such measures as using juice and wafers in disposable single-use containers, but that doesn’t work across the board.

“We take a very traditional view of the sacrament, and will not use disposable containers with sterile wafers and wine,” Hull said. “Right now we are adopting a view of sacred longing for the sacrament, but who knows what our common practice will be in six months or a year.”

“I think once everything calms down from the pandemic, most people will resume physically going to church for the social aspect,” she said. “We, as Christians, enjoy being together.”

There won’t be any handshakes or hugs for a while, she added – “but I expect that to resume also in the future.”

The congregation of Old Well Christian Church in Spencer meets outside for Sunday service while the sanctuary is closed.

Susan Spangenberg of Pocahontas Bassett Baptist Church said the pandemic restrictions forced churches to get creative with worship, and she expects many of those new methods are here to stay.

Patrick Sharpe took this picture of a drive-in worship service at Pocahontas Bassett Baptist Church. Pastor Susan Spangenberg said it still would be fun to continue to have an occasional drive-in service even after the pandemic restrictions are lifted.