Humanity remains in the dark about so many great mysteries. What is consciousness? Are we the only intelligent life in the cosmos? And what’s the difference between main cabin and basic economy airfare?

I’ve written a lot about basic economy, explaining when to book it, how much it saves and why the airlines themselves don’t really want you to book these low-priced fares. But the topic remains a mystery for many, including this column’s most devoted readership: my family.

I booked a basic economy flight for my nephew recently and, judging from my family’s reaction, you’d think I sent him to Siberia. “What if he’s bumped off his flight?” they asked. “Huh?” I responded.

To be fair, airlines have made the rules and fees associated with basic economy fares extraordinarily complicated, so nobody should feel bad for being confused. But there are some common misconceptions about basic economy fares that are worth clearing up before considering that low-cost ticket for your next flight.

If you haven’t flown much in the past few years, you might have missed a major change in how airlines handle seat assignments. In the olden days, you’d buy a ticket, pick a seat and that was it. Now, seat assignments are treated like a perk, with fees and restrictions applied to the mere action of selecting any seat at all.

These confusing fees are baked into the basic economy game as well. Other than American Airlines, all major U.S. airlines severely restrict seat assignments during the purchase of a basic economy fare.

Let’s break down what this actually means: On most airline basic economy tickets, you won’t be able to select your seat ahead of time. Instead, you’ll be assigned one at check-in or the gate.

So you're not any more likely than any other passenger to get bumped from the flight. Your basic ticket confirms that you'll get a seat on the plane — it just doesn’t confirm which seat that will be.

Misconception 2: The basic economy experience is the same on every airline

I recently did an in-depth analysis of U.S. airlines' basic economy rules and was shocked by how many differences I found. For starters, some give these fares another name. JetBlue calls them Blue Basic. Alaska calls them Saver. (Annoying, I know.)

More importantly, the airlines have completely different rules for trip flexibility, how miles are earned, how standby is managed and how much they upcharge for main cabin fares.

Here's a look at how the price differences vary between basic economy and main cabin tickets:

There's a $33 difference in price between the highest and lowest cost markup.

Note: American Airlines is excluded from this list because, weirdly, we couldn't find enough basic economy fares on American. (This is a good thing and means the cost of an American flight in search engines might be significantly lower than the effective cost of other airfare.)

I further boiled down all of the differences to a simple 5-point rating system to show which basic economy ticket is least basic.

American came out on top. 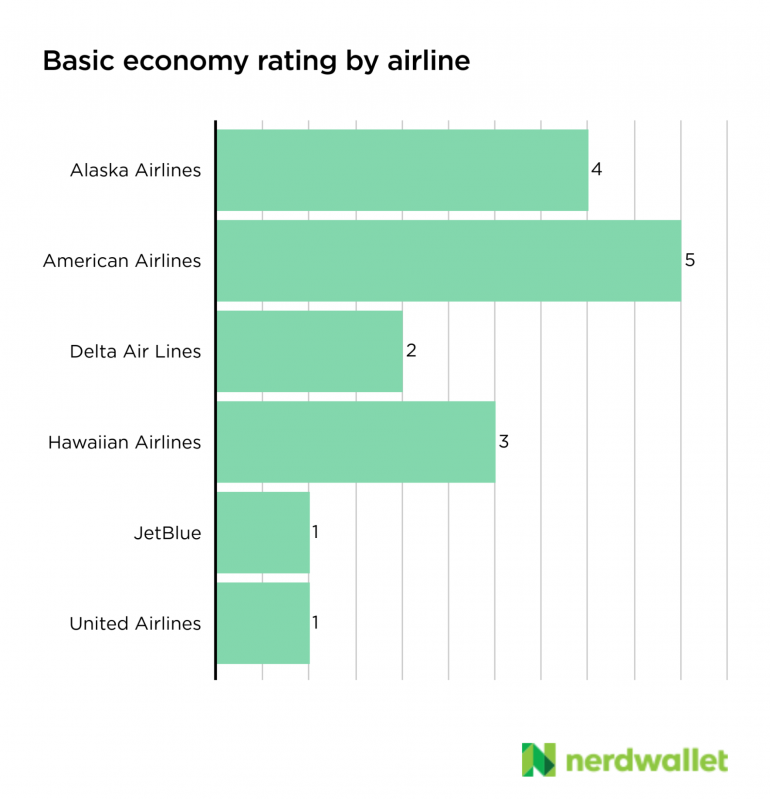 These ratings are helpful for determining which basic economy fares to avoid and which to target. They're not very useful, however, for understanding the underlying rules. If you often fly with, say, Delta, and manage to wrap your head around its rules for basic economy, that won’t help you understand whether to book a similar fare on Alaska.

Misconception 3: You can change or cancel basic economy tickets for free

This distinction is major, and is now the biggest reason to pay the upcharge for a main cabin fare. Unless you’re absolutely sure of your travel plans, it’s likely worth paying more for an effectively refundable main cabin fare to avoid the potential of having to book an entirely new basic economy ticket.

If you feel overwhelmed or confused, take heart. I literally do this for a living, and every time I book airfare, I twist myself in knots over whether to buy basic economy or upgrade to main cabin. It’s confusing by design.

Yet if you understand some common points of confusion, you'll be ahead of the bulk of other travelers. Seat assignments have nothing to do with getting bumped from a flight. Every airline has its own rules for what basic economy actually means. And you can’t change or cancel most basic economy fares (even if an airline has presumably eliminated change and cancellation fees).

The article Ask a Travel Nerd: What’s the Deal With Basic Economy? originally appeared on NerdWallet.

Start your morning off the right way and avoid these mistakes

Start your morning off the right way and avoid these mistakes

How to have the wedding of your dreams on a budget

How to have the wedding of your dreams on a budget

Red flags that prove your work friendship is toxic

Red flags that prove your work friendship is toxic

Some airlines have moved toward banning booze on flights, but a New Zealand wine company is taking things in a slightly different direction by launching the "world's first winery airline."

Camping surges in popularity across US during pandemic

In the last several years, many travelers ditched the comforts of hotels and resorts, finding the joy of escaping crowds in a tent or RV.

Need inspiration for our 2022 Destinations Photo Contest? We have you covered.

Ed Perkins on Travel: Delay, cancellation: What an airline really owes you, part 1

Winter isn't over, neither is COVID-19 or staffing shortages, so if you're planning to fly somewhere during the coming months, you need to know exactly what your airline owes you if it cancels or delays your flight. What you get is specified in the fine print of each line's contract of carriage.

Ask a Travel Nerd: Can I Travel Without a COVID Vaccine?

Why January is the best month to book travel

It’s the New Year, and with it come new sales and greater opportunities to save money on this year’s travel experiences.

5 Reasons Why ‘Shoulder Season’ Is the Best Time to Travel

In many ways, travel in 2021 was more challenging than it was in 2020. While demand for travel returned, sufficient hospitality staffing often did not, leading to long waits at…

Will You Need a COVID-19 Vaccine Booster to Travel?

You don’t need vaccination against COVID-19 — better yet a vaccine booster — to simply cross the Golden Gate Bridge into San Francisco. But tourists and locals alike will soon…

Historic, trendy and vibrant, Turkey ever a land of plenty

As a world traveler, I had put one destination on hold until three things aligned: finances, timing and motivation.

Back in the 1980s, on a train heading for Budapest, I stood in the aisle with my elbows on the edge of an open window, enjoying the moonlit countryside rushing by. I was soon joined by a Czech woman who was doing the same thing. She told me she was on her first trip out of her country. I asked her if she was excited about visiting Budapest. She said she was most excited about eating a McDonald’s hamburger. The buzz throughout Eastern Europe was that Hungary had just opened a branch of the American chain.